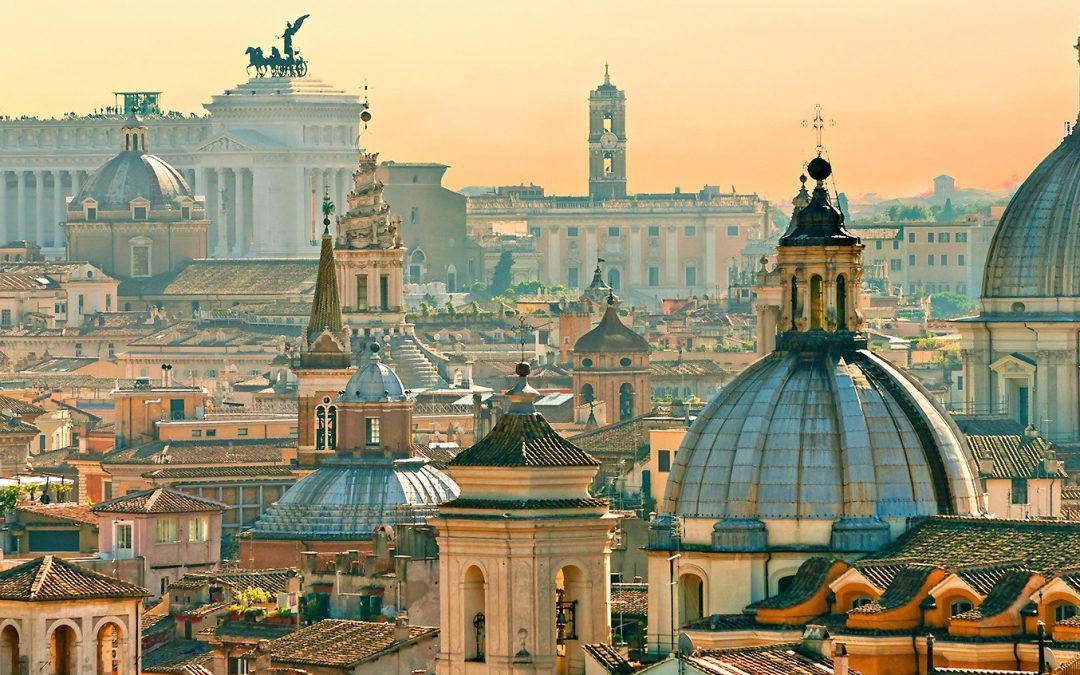 Lord Byron lived in Italy for seven years. He arrived in Rome in 1817 and his visit to Torquato Tasso’s cell inspired his Laments of Tasso. Tasso was the greatest Italian poet of the late Renaissance.

In the three years that followed Byron’s Rome visit he wrote the first five cantos of Don Juan. In his own words, Rome “delighted” him.

Oh Rome! my country! city of the soul!

The orphans of the heart must turn to thee,

In their shut breasts their petty misery.

What are our woes and sufferance? Come and see

The cypress, hear the owl, and plod your way

Whose agonies are evils of day –

A world is at our feet as fragile as our clay.

It was about this time that Byron sold his Newstead home. Upon visiting Byron’s Italian home, in 1821, Percy Shelley witnessed Byron’s eccentricities, noting them in his diary:

‘Lord B.’s establishment consists, besides servants, of ten horses, eight enormous dogs, three monkeys, five cats, an eagle, a crow, and a falcon; and all these, except the horses, walk about the house, which every now and then resounds with their unarbitrated quarrels, as if they were the masters of it… . [P.S.] I find that my enumeration of the animals in this Circean Palace was defective … . I have just met on the grand staircase five peacocks, two guinea hens, and an Egyptian crane. I wonder who all these animals were before they were changed into these shapes.’

There’s an imposing statue of Lord Byron in Rome’s Villa Borghese, a park that Byron would have visited. Nearby is the five-star Hotel Lord Byron.

Married couple William and Mary Howitt produced the radical People’s Journal together and collaborated throughout their long literary careers. Mary considered herself ‘bound to no class’ and her fiction and translations were popular with both adults and children.

William Howitt died in Rome in 1879. Much affected by her husband’s death, Mary stayed in Rome and joined the Roman Catholic Church. In 1888 Mary was one of the English pilgrims received by the Pope at a ceremony that filled her “with spiritual joy and peace”. Not long after, Mary died of bronchitis. She was given permission from the Cardinal Vicar of Rome to be buried next to William in the Protestant cemetery.

It could be argued that D.H. Lawrence found his most creative inspiration in Italy. Whilst it was rural Italy that informed much of his writing, Rome with its great history, art and civilisation made its mark. By 1927 Lawrence suspected he was dying. It was in this year that he visited the museums of Rome, experiences that helped him write Etruscan Places, first published posthumously in 1932. Lawrence’s visit to Etruria was to be his “last pilgrimage”. Etruscan Places is a beautiful and delicate work of literary art, the record of “a dying man drinking from the founts of a civilization dedicated to life”. In the book Lawrence contrasts the life affirming world of the Etruscans with life under Mussolini.

‘The Etruscans, as everyone knows, were the people who occupied the middle of Italy in early Roman days, and whom the Romans, in their usual neighbourly fashion, wiped out entirely in order to make room for Rome with a very big R.’ (from Etruscan Places)

Cecil Roberts received the Italian Gold Medal in 1966 from the city of Rome. This was a year after he had become the first author to be named one of the honorary Freemen of the City of Nottingham. The prolific author and former Nottingham Journal editor was an inveterate traveller and, in 1950, he moved to Rome and immediately wrote a vivid portrayal of 2,000 years of life in “the most astonishing city in the history of mankind” entitled And So To Rome (published 1950). Roberts died in Rome in 1976, aged 84.

The novelist Robert Harris was born in Nottingham and grew up on a local council estate. His link to Rome comes in the form of several of his greatest novels. His historical fiction Pompeii (2003), and Cicero trilogy – Imperium (2006), Lustrum (2009) and Dictator (2015) – were followed by Conclave (2016), a gripping character-driven thriller set over 72 hours in the Vatican as the cardinals look to elect a new Pope.