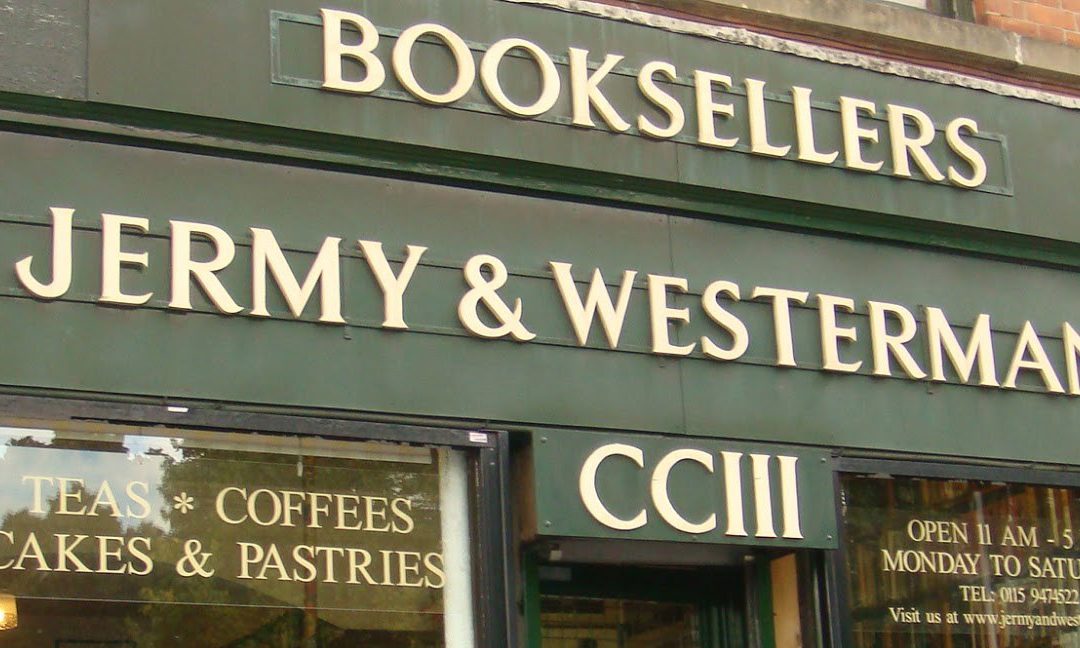 Jermy and Westerman was established in 1978. The second-hand bookshop, which also sells some new books, has been owned by Geoff & Richard Blore (father and son) since 1987. The ground floor houses antiquarian books of local relevance as well as a tearoom. As the stairs climb upwards, so do their eclectic mix of books, which cover every wall and crevice. The shop has been a host venue for the Nottingham Poetry Festival, showcasing performances from the likes of Rosie Garner and Henry Normal.

Nottingham’s Philip James Bailey, best known for his epic poem Festus, is buried in the Church (Rock) Cemetery on Mansfield Road. Bailey became obsessed by his poem, revising and expanding it until it boasted 40,000 lines. Festus was supposed to be a favourite of Queen Victoria. In 1856, Bailey was awarded a Civil List pension of a hundred pounds a year, which he drew until his death, 46 years later.

We live in deeds, not years; in thoughts not breaths;

We should count time by heart throbs: he most lives

Who thinks most, feels the noblest, acts the best.

The Death of Charles Hooton

Charles Hooton, born 1810, was a newspaper editor before becoming a much-travelled journalist, writing articles and literature for magazines. His first novel Colin Clink was set in Yorkshire and Dickensian in style. Hooton died of a drug overdose in his mid-30s, in the house next-door-but-one to the Forest Tavern (now The Maze) on Mansfield Road, in what is no. 255.

The Lord of Milan

Robert Nieri’s The Lord of Milan tells of the life of a man from Mansfield Road. The son of a butcher, Herbert Kilpin was born in Nottingham in 1870 growing up with nine older siblings at 129 Mansfield Road (the house is now 191 Mansfield Road). A keen footballer Kilpin moved to Italy in 1891 for work and he was picked to play for Internazionale Torino, thus becoming the first Englishman ever to play in a foreign team. In 1898 he settled in Milan and founded the Milan Cricket and Football Club. As a promoter, coach and player Kilpin helped win the first three of AC Milan’s many league titles.

Sherwood Library is home to the Page Turners book group and it hosts monthly talks.

Home of The Reading Room, a book club that meets on the 3rd Thursday of the month.