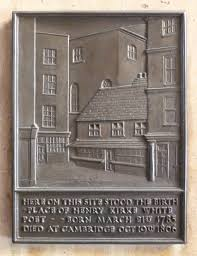 The son of a local butcher, Henry was a bright lad and started school aged three, soon becoming a voracious reader. He later wrote a poem about his time there at Mrs Grassington’s school:

First at the form, my task for ever true

A little favourite rapidly I grew.

And oft she stroked my head with fond delight

Held me a pattern to the dunce’s sight.

Henry’s father’s butcher’s was in the nearby Shambles, Henry’s birthplace, opposite the Flying Horse Hotel. A writer at six, young Henry went off to the Nottingham Academy studying English, Latin and Greek.

Taken out of school by his father, Henry was made to work at the family butcher’s and his education fell to a Mr Shipley who was amazed by the boy’s talents. The youngest member of the Nottingham Philosophical Society, Henry began to teach himself law, chemistry, astronomy, electricity, mechanics and drawing. He was also a proficient musician, composer and carpenter whilst attending city schools.

By 1798 he was a prolific writer of poetry and reader in the classics and modern literature. He had also become a stocking-weaver in the hosiery trade, Nottingham’s main industry. Henry hated the drudgery and complained to his mother that he simply couldn’t finish his apprenticeship spinning and folding stockings. He even wrote to the editors of the ‘Nottingham Journal’ describing his concern for the state of the town’s female lace workers. Henry was allowed to join a Middle Pavement law firm as an apprentice to an attorney. Their office was in Rose Yard, now called King John’s Chambers, Bridlesmith Gate.

He worked long hours, writing poetry in his free time (including lunchtime and while walking), but his poor hearing ruled out a law career.

During a month’s leave of absence due to ill health Henry was taken by his mother to stay in a cottage in Wilford. He wrote poems in St. Wilfrid’s churchyard.

Here would I wish to sleep, this is the spot

Which I have long marked out to lay my bones in.

Sadly they are not.

The Homes and Haunts of Henry Kirke White (pub 1908) by John T. Godfrey and James Ward devotes 27 pages to Wilford, and 35 to Clifton.

At fifteen Henry gave a talk to a Nottingham literary society on the poet Thomas Chatterton. He wanted to join the group but was rejected for being too young. They relented when his poems began to appear in the ‘Monthly Mirror’ and the ‘Monthly Preceptor’. A string of prizes later, in 1803, he published poetry that included ‘The Fair Maid of Clifton’ and ‘Clifton Grove’. This led to Henry becoming the protégé of the future poet laureate Robert Southey who encouraged him to go to St John’s College Cambridge, with the intention of a career in the church, but Henry’s tuberculosis had other ideas.

He did go to St. John’s and despite his deafness and illness being a handicap he did well and established himself as one of the foremost classical scholars. But tuberculosis, with its insomnia and palpitations, was shattering his nerves and, after a fit, he was bled and blistered as treatment.

I would not have my corpse cemented down

With brick and stone, defrauding the poor earthworm

Of its predestined dues.

The plaque inside the Exchange Arcade, Cheapside, Council House. Reads:

‘HERE ON THIS SITE STOOD THE BIRTH

Henry died at St John’s in 1806, aged twenty-one. His letters and unpublished papers were put inside a box which Southey collected from Henry’s brother. Coleridge, present when the box was opened, was astonished by the writing, much of it done before Henry was thirteen. There were papers on law, divinity, electricity, languages, numerous poems and a planned History of Nottingham.

In 1807 Southey edited the collection and wrote an account Henry’s life – ‘The Remains of Kirke White’ – ensuring that a posthumous edition of his work was published to great success.

Henry Kirke White was remembered at a centenary banquet in 1906 at which Professor F Granger of University College said that Kirke White and his contemporaries, Gilbert Wakefield, Richard Parkes Bonington and Marshall Hall, were the most eminent persons Nottingham had ever produced, thus making it a “centre of genius and learning”.

Before whose face flies fast the summer’s friend

And leaves thee all forlorn

From the poem Genius by Henry Kirke White.

His poetry is little read these days but his hymn ‘Oft in danger, oft in woe’ is still sung.