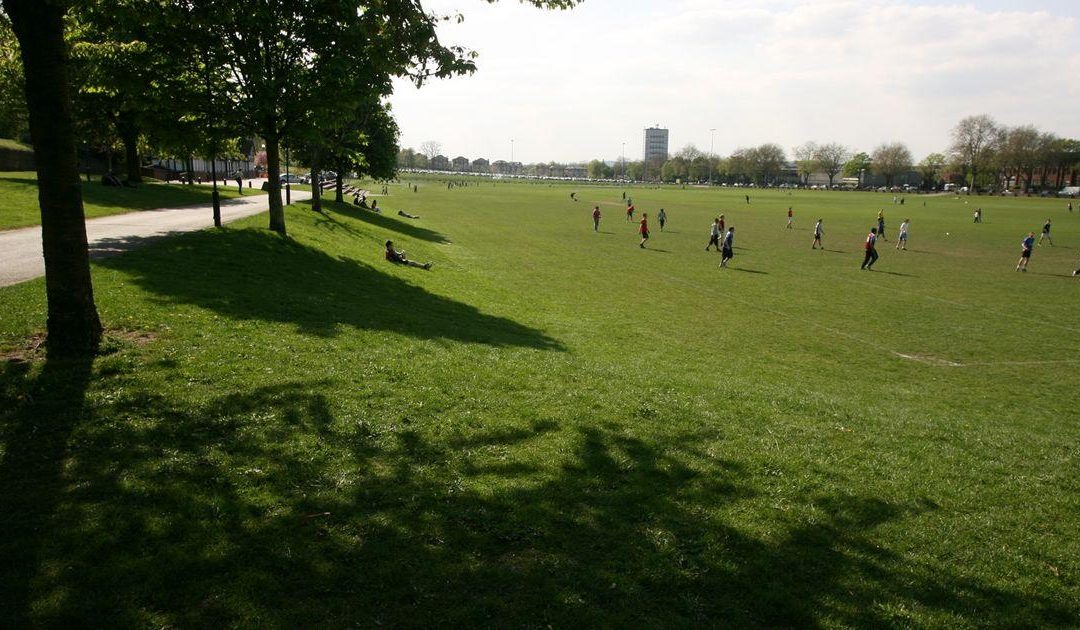 The Forest Recreation Ground, about a mile north of the city centre, was once the southernmost part of Sherwood Forest. Best known for being Goose Fair’s annual home and a site for park-and-riders, for over 300 years the Forest has hosted amateur sport.

The son of a butcher, Herbert Kilpin – who grew up at 129 Mansfield Road (now no. 191) – played football on the Forest before moving to Italy in 1891. Picked to play for Internazionale Torino, Kilpin became the first Englishman to play in a foreign team. He later settled in Milan and founded the Milan Cricket and Football Club (now AC Milan). As a promoter, coach and player, Kilpin helped win the first three of AC Milan’s many league titles. Robert Nieri’s book ‘The Lord of Milan’ (2019) tells the story of our man from Mansfield Road.

The versatile novelist J. C. Snaith played cricket on the Forest in the late 19th century and dedicated ‘Willow the King: The Story of a Cricket Match’ (1899) to his colleagues at the Nottingham Forest Cricket Club.

Situated at the south-east corner of the Forest is Church (or Rock) Cemetery, founded in 1848, and the resting place of many writers including Philip James Bailey (1816-1902). Its location on the top of the Forest ridge had previously been the site of Gallows Hill, for centuries a place of executions. One person to be hanged there was Mary Voce and her story inspired a leading author of the Victorian era.

Mary Voce from Fisher Gate (born Mary Hallam in Sneinton) was found shocked and frightened after her six-week-old baby had been poisoned with arsenic. The heart-broken mother was charged with poisoning her child and, despite proclaiming her innocence, she was imprisoned to await execution.

In 1802 Voce appeared before a judge who asked her if she’d anything to say. She handed him a piece of paper refuting the charge, blaming the poisoning on her neighbours’ children, whilst admitting to have purchased the arsenic with the intention of poisoning herself after suffering much abuse from her husband.

After ten minutes of deliberation, the jury declared her ‘guilty’. The Methodist preacher Elizabeth Tomlinson visited Mary Voce to pray with her and to persuade her to accept her crime. Tomlinson stayed with her through the night until, finally, the accused woman broke down and confessed. The preacher then travelled with her in the cart to Gallows Hill. Voce greeted her executioner with a smile and gave him her hand. ‘Bless you,” she said to him. “I have nothing against you. Somebody must do it.” Her body was left to hang for an hour, her dissected remains later placed on public display.

Two years later, Tomlinson got married. Her niece, Mary Ann Evans, became fond of her and would listen carefully to her recollections. Aged 20, Mary Ann heard all about Mary Voce and her aunt’s time talking with her in the prison cell. Two decades on, Mary Ann Evans, better known for her pen name George Eliot, published ‘Adam Bede’ (1859). The author recalled, “The germ of ‘Adam Bede’ was an anecdote told to me by my Methodist Aunt [Elizabeth Tomlinson]” Eliot added, “We were sitting together one afternoon … probably in 1839 or 40, when it occurred to her to tell me how she had visited a condemned criminal, a very ignorant girl who had murdered her child and refused to confess…”

Predating Gallows Hill, Goose Fair has been a part of the Nottingham calendar for over 700 years but only moved to the Forest in 1928, the year Alan Sillitoe was born. Sillitoe’s short story, ‘Noah’s Ark’, from ‘The Loneliness of the Long-Distance Runner’ (1959), tells of young Radford cousins, Colin and Bert, as they visit Goose Fair on its final Saturday, just fourpence between them, for cakewalk and candyfloss, plus a few resourceful tricks at their disposal. They go looking for a free ride on the eponymous Noah’s Ark, a carousel of painted animals. Before they head to the fair, there’s the sight of a, “trundle of wagons and caravans rolling towards the open spaces of the Forest. [Colin’s] brain was a bottleneck, like the wide boulevard along which each vehicle passed, and he saw, remembering last year, fresh-packed ranks of colourful Dodgem Cars, traction engines and mobile zoos, Ghost Trains, and Noah’s Ark figures securely crated on to drays and lorries.”

Goose Fair famously appears in Sillitoe’s novel ‘Saturday Night and Sunday Morning’ (1958) where Arthur Seaton loses “all idea of time and place locked in the belly of its infernal noise.” Karel Reisz’s 1960 screen version is filmed on location at the fair, Albert Finney (Seaton) and Shirley Anne Field (Doreen) riding the Waltzers and Dodgems, before Seaton tries to dodge trouble as he meets with Brenda (played by Rachel Roberts).

The fair has an edge, as anywhere might with such a “crushing mass of gaping and sweating humanity”, as J. B. Priestley describes the crowds in ‘English Journey’ (1934).

John Harvey might have avoided temptation to lean on Goose Fair for a story – though he does have Resnick attend a dead body on the Forest in ‘A Darker Shade of Blue’ (2010) – but other crime fiction has taken advantage of the bustle and chaos of Goosey. In Keith Wright’s fourth Inspector Stark crime thriller, ‘Fair Means or Foul’ (1995), the death of a young girl at Goose Fair leads to a murder investigation. Wright himself was an inner-city CID Detective Sergeant and another retired Detective, Alan Dawson, features Goose Fair in his debut suspense novel ‘The Showman’ (2017), written under the pseudonym Jacques Morrell. In this scene, set in 1978, the character Michael is seeking answers:

‘They got into a car on the Big Wheel, an open bench that behaved like a rocking chair. A metal bar was closed and locked into place across their thighs. The wheel started its rotation, moving forward then up and round, stopping as each of the sixteen cars reached the gangway. Michael felt like he was on the second hand of a giant clock, time ticking away with each stop. He felt as though he had sixty hypothetical ‘seconds’ to get whatever information Bob Collins had for him. Once the wheel had turned its full circle, his time would be up.‘

The poet Kathy Pimlott was born in Radford between Players and the Forest. She later lived on Western Boulevard where she would observe Goose Fair arrive and leave. Having resided in London for four decades Pimlott still missed “the specific, dangerous excitement that only happened once a year for two and half days.” In 2016 she wrote the poetry collection ‘Goose Fair Night’ (2016), reflecting on the fair and other places in and around Nottingham.

Goose Fair gets its name from back when 20,000 geese were walked down from Lincolnshire to be sold, their feet dipped in tar to protect them on the long journey. D. H. Lawrence references this at the start of his short story entitled ‘Goose Fair’, from ‘The Prussian Officer and Other Stories’ (1914):

‘Through the gloom of evening, and the flare of torches of the night before the fair, through the still fogs of the succeeding dawn came paddling the weary geese, lifting their poor feet that had been dipped in tar for shoes, and trailing them along the cobble-stones into the town.’

When Lawrence was a regular visitor at Goose Fair it was still being held in the Market Square.

In two of his novels, Cecil Roberts captured what it would have been like in Lawrence’s day. In ‘A Terrace in the Sun’ (1951) – Roberts’ self-titled ‘Nottingham novel’ – he writes, “Early in October every year there converged upon Nottingham from all over England all the travelling shows and hucksters.” A time when the Market Place hosted, “benign elephants and gloomy camels” as well as lions, tigers, zebras, hyenas, monkeys and wolves, and “helter-skelters like windmills” and “booths with prize-fighters who challenged all comers.” His depiction of the fair’s rowdiness, in the great crowds that grew before the midnight closing, suggest good reason for its moving to the Forest. “On the last night it was almost a matter of fighting one’s way into the packed mass that swayed and circulated” … “crushes that became near panic in which a rougher element delighted” and “an ugly temper began to raise its head.”

Perhaps letting off steam or escaping the routine of everyday life is what Goose Fair is all about. In the novel ‘Goose Fair’ (1928) – published in England as ‘David and Diana’ – Cecil Roberts sums it up nicely when he wrote: “Every first Thursday in October, following the custom of centuries, the good people of the city whose Sheriff was so soundly abused by Robin Hood, take leave of their senses.”