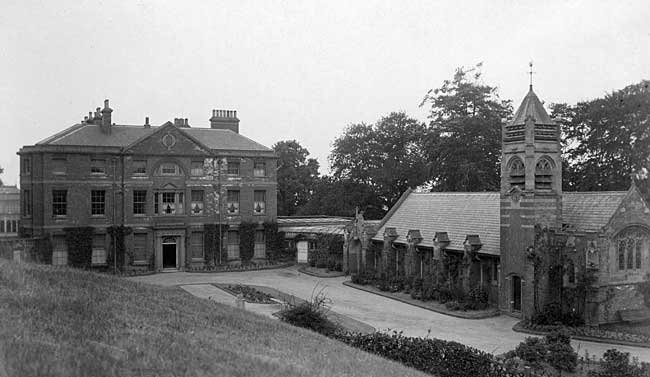 The image of a War Horse being entrenched in deep mud and dragged out by the soldiers around him – familiar to fans of the Spielberg movie – represents just one of the real events to have inspired a much earlier story, by an author with links to this week’s literary location. Warrior the War Horse served in many key battles during the First World War, including the Battle of Ypres, the Battle of Passchendaele and the Battle of Moreuil Wood. He became known as ‘The horse the Germans couldn’t kill’.

Sherwood Lodge in Arnold was built around 1790 and became associated with the Seely family of politicians, industrialists, landowners and writers.

The philanthropist and radical MP, Charles Seely (1803–1887), was one of the wealthiest industrialists of the Victorian era. In 1864 he hosted the Italian revolutionary General Giuseppe Garibaldi, inviting him to stay with him on the Isle of Wight, to avoid the adoring crowds in London. Queen Victoria had requested that Seely urge Garibaldi to leave the country and she registered her displeasure when he didn’t.

Sherwood Lodge became home to Seely’s son, Sir Charles Seely (1833-1915). In ‘The Great Houses of Nottinghamshire and the County Families’ (1881), Leonard Jacks wrote of Sherwood Lodge that, “before Mr. Seely purchased the property, it was the residence of the Rev. George Francis Holcombe, who was Vicar of Arnold, a county magistrate, the possessor of rare social qualities, and a very good judge of horse flesh.”

Like his father, Seely joined the Liberal Party and, from 1869, served two spells as an MP for Nottingham and Nottingham West. In 1895 he was the first person to be made a Freeman of Nottingham and a year later he was made Baronet of Sherwood Lodge and Brooke House.

Seely made considerable improvements to Sherwood Lodge, doubling its size, including the addition of a library; and with these alterations and the chapel at the eastern edge, Sherwood Lodge became his main residence. He made large purchases of land in the area around Sherwood Lodge, taking his land in Notts to some 3,000 acres. Toward the end of his life, when suffering ill heath, Seely lived on the Isle of Wight where he built Brook Hill House, later home to J. B. Priestley.

Inheriting the family estates at Sherwood Lodge was Sir Charles Hilton Seely (1859-1926), 2nd Baronet and Liberal MP for Mansfield. He was also a Justice of the Peace for Nottinghamshire and the Deputy Lieutenant. The third Baronet was Hugh Michael Seely (1898-1970), who became the first Baron Sherwood. Another Liberal politician he was also High Sheriff of Nottinghamshire.

Another son of the first Baronet was Frank Evelyn Seely (1864-1928), who worked in the family business at Babbington Colliery. He also joined the army and served as a captain in the South Nottinghamshire Yeomanry. During the First World War he fought in Egypt and Gallipoli before reaching the rank of Lieutenant-Colonel. He was known for his philanthropic work throughout the county and made High Sherriff of Nottinghamshire. A councillor for Calverton, he was also known for his philanthropic work with Convalescent Homes and the Social Services.

His name was taken by the main school in Calverton when it opened in 1957. The Colonel Frank Seely Academy can count the popular Olympian Christopher Dean and the current Chief Whip Mark Spencer amongst its former students. As a Year 7 pupil at Colonel Frank Seeley, Aaliyah Neil (A. S. Neil) became one of the UK’s youngest published crime writers. She was eleven years old when her book ‘Simon Dovers’ (2018) was published. It’s about a boy with an eye for crime who stumbles across a dead body.

Burntstump Seely Church of England Primary Academy was founded in 1902 by the Seely family of Sherwood Lodge. Apparently, it was after noticing a group of children struggling through the snow and ice on their way to school in Arnold, that the Seelys decided to build a school for them. The Seely family ‘governed’ the school, known as Sherwood Lodge School, until 1956.

One of Colonel Frank Seely’s brothers, and the 1st Baronet’s youngest/seventh child, was John Edward Bernard ‘Jack’ Seely (1868-1947). Born at Brookhill Hall, just over the Notts/Derbs border, General (or Colonel) Jack Seely went to school with Winston Churchill and they became lifelong friends, Churchill becoming a godfather to one of Jack’s sons.

Jack Seely was awarded the DSO for his bravery in the Boer War and, returning to England, he was elected Conservative MP for the Isle of Wight; though later, like Churchill, he crossed to the Liberal party. Seely was a member of Asquith’s War Council and became Secretary of State for War in the two years before the First World War. Forced to resign, as a result of the Curragh mutiny, he was sent to the Western Front in 1914 and was the only former cabinet minister to still be on the frontline four years later.

Seely took his thoroughbred horse with him and they survived the four years of bombs and bullets, and headed into a huge cavalry charge at the Battle of Moreuil Wood in 1918. Known to his soldiers as General Jack, Seely made his name as a humane leader. His trusted mount, Warrior, remained with him throughout the War. Together they survived many dangerous situations before returning home after the Armistice. Physically unscathed they lived on the Isle of Wight where they rode on to the combined age of 100.

Seely’s book is really the story of Warrior, from his birth on the Isle of Wight, to his life as a famous and fearless war horse. It describes the incredible twists of fate that saw him survive a war that took the lives of eight million other horses. This moving true story is illustrated by the legendary Sir Alfred Munnings, who first painted Warrior at the front when he was the official War Artist to the Canadian cavalry, led by Seely.

Warrior lived until the middle of the Second World War, by which time he was 33. In 2014 he was posthumously awarded the first Honorary PDSA Dickin Medal, the animals’ equivalent to the Victoria Cross. The medal was accepted by John Brough Scott.

In 2011 Brough Scott published ‘Warrior: The Amazing Story of a Real War Horse’. This is a new edition of Seely’s story of his trusted horse, complete with Munnings’ original illustrations. The book is introduced by Brough Scott, with Sir Peter O’Sullevan writing the preface.

First editions of the 1934 hardback version of ‘My Horse Warrior’ by Lord Mottistone are worth tracking down. As for Sherwood Lodge, it would no longer be recognisable to the Seely family, the grand old house being demolished and replaced. A former headquarters of the National Coal Board, Sherwood Lodge has been used by the police since the 1970s and now has a new three-storey building costing £18.5 million. A joint headquarters for the Nottinghamshire Police Force and Nottinghamshire Fire and Rescue Service, the land also hosts a private hospital and Burntstump Country Park. It’s accessible from the A60/Mansfield Road and Burntstump Hill.

The venue remains a literary location. Stephen Booth’s Detective Sergeant Diane Fry is no stranger to Sherwood Lodge – in his Cooper & Fry crime series – as Derbyshire’s E Division are often required to cooperate with Nottinghamshire Police.