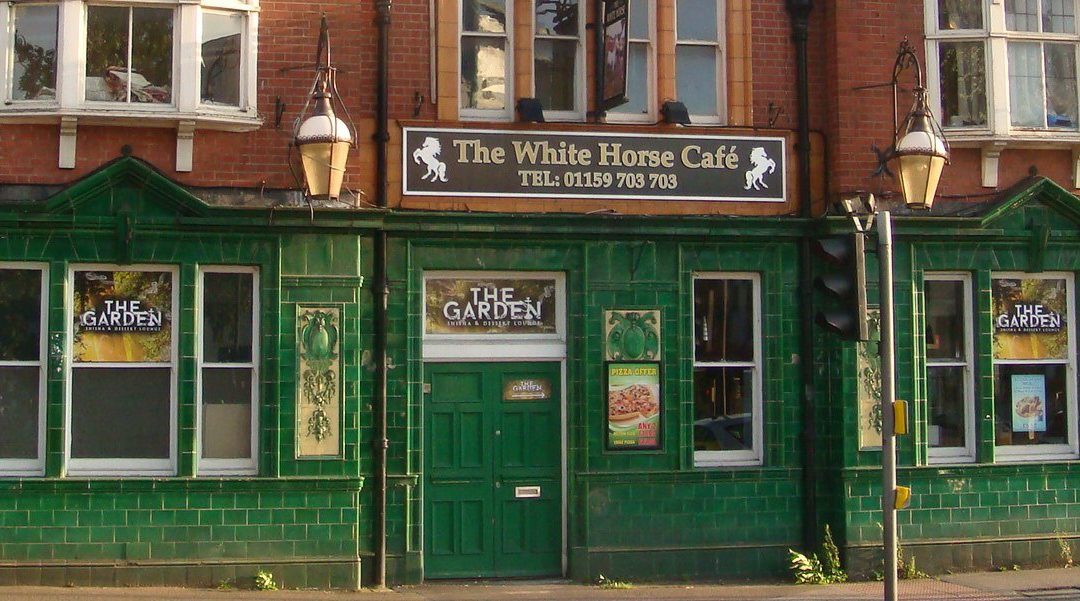 Of the Nottingham pubs that feature in Alan Sillitoe’s Saturday Night and Sunday Morning it is The White Horse that’s the most noteworthy, possibly because it is the setting for the novel’s memorable opening in which it’s not only Saturday night, it’s Benefit Night and Notts County have just won. The floors are shaking and the windows are rattling. The week’s monotonous graft at the Raleigh factory is being swilled out of systems and, with eleven pints and seven gins in his belly, Arthur Seaton is about to fall down the stairs.

A studio set was used for the interior shots of The White Horse for the film adaptation, which features the drinking game that ends with Albert Finney’s stunt double descending the stairs. Those stairs still exist, as does the building but the pub is now The White Horse Café, although this seems to be using the back of the building with a taxi company in the former pub lounge.

The White Horse has been home to the Radford Boys Boxing Club. Alan and Roy Smith of Sneinton set up the club and coached young pugilists under the big glass roof above the pub before it took over the building to the rear. Nottingham born Herol ‘Bomber’ Graham and Jason Booth learned their trade at the club before going on to become European Middleweight and Commonwealth Flyweight champions respectively. It’s fitting that boxing has a connection with The White Horse as Arthur Seaton was ‘handy’.

Of course, Seaton’s fights were not just of the physical kind. From SN&SM: “And trouble for me it’ll be, fighting every day until I die. Why do they make soldiers out of us when we’re fighting up to the hilt as it is? Fighting with mothers and wives, landlords and gaffers, coppers, army, government. If it’s not one thing it’s another, apart from the work we have to do and the way we spend our wages. There’s bound to be trouble in store for me every day of my life, because trouble it’s always been and always will be.”

Boxer Lee Froch has something of the Arthur Seaton about him and at one time he was the landlord at The White Horse. Lee has always considered himself a drinker and has been no stranger to falling down drunk. As a functioning alcoholic Lee, much like Seaton, would work hard and pay the bills but drink was in his system. Lee has now been sober for four years and is putting his energy into boxing, focusing on his new career. Now in his 40s Lee is a EBF English, British, European and International Heavyweight Champion. Lee recently said, “My children now don’t remember me as the person who once fell down the stairs.”

Like Lee Froch, The White Horse is still standing, and its exterior still looks fighting fit.