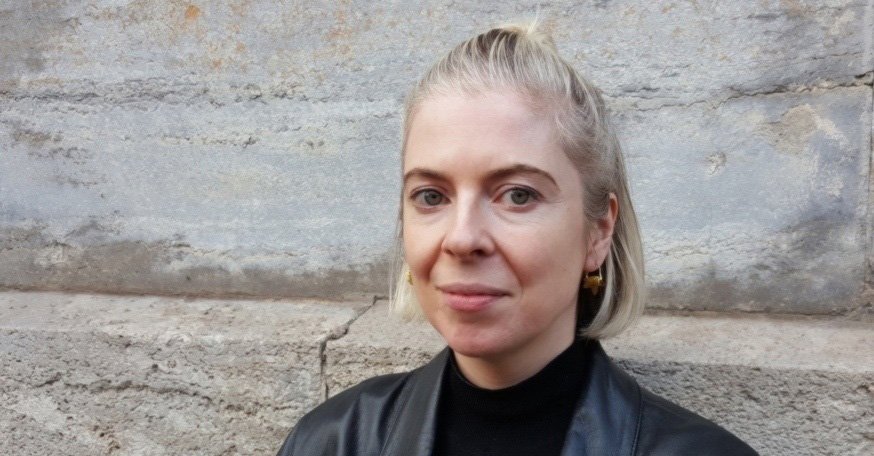 Our chair, David Belbin, writes: Susan Finlay grew up in Nottingham and went onto study Fine Art at Camberwell and the Royal College of Art in London before moving to Berlin. She recently returned to her hometown however, and is now a resident artist at PRIMARY, while also studying on an AHRC funded PhD at the University of Manchester. She writes poetry and fiction, and is the author of three novels, most recently ‘Objektophilia’. Below, she tells us about her forthcoming fourth novel and how lockdown has been treating her.

I studied fine art before I became a writer, and both my books and my paintings share similar preoccupations. For example, my latest novel, Objektophilia, concerns a woman who quite literally falls in love with the Vienna Secession, while my most recent set of artworks also utilize motifs from this period (or alternatively, there’s a lot of gold swirls and black and white checks going on). However, this mix of art and writing also affects my way of working as much as what I produce. Whatever the literary endeavour I’ve undertaken is, it always goes downhill once I’ve been sat in front of my laptop for more than a couple of hours. Likewise, I’m always worn out after half a day of lugging things around in the studio. Yet once I put these two, seemingly quite different processes together, everything turns out just fine.

Of course, some things have changed since lockdown. Objektophilia was published in mid-February and most of the accompanying events have been cancelled, although I did admittedly give rather an awkward reading on Zoom. I had some teaching days lined up that didn’t happen, and my current residency at the Freud Museum is somewhat complicated by the fact that pretty much everyone I’m meant to be working with has now been furloughed. However, I’m also extremely fortunate in that I’m in receipt of regular PhD funding, and that despite only having moved back to Nottingham, my hometown, a week before the lockdown started, I still managed to secure a space at PRIMARY artists’ studios; or a large, quiet room of my own.

Most days, I wake up fairly early and write for an hour or so while still in bed in my pyjamas. Then, I gobble down some breakfast, throw my clothes on, and set off. I live in Sneinton, and my studio is on Seely Road, about five minutes up from the Cathedral. It’s a half hour walk there and a half hour walk back, which totals precisely one hour outdoors, and as the place I’m working in is self-contained, it’s also clean and safe. I’ve always found walking to be quite meditative, and soon become so caught up in my own thoughts that I often don’t notice my surroundings – although at the moment it’s impossible not to. Now that lockdown’s easing there’s more people around, but in the beginning, I only ever saw homeless men in Market Square. There was one guy in particular that really stuck in my mind. He was always carrying a stack of Big Issues, only there was nobody left to buy one besides myself.

see the entertainment as the foundation for your work, and then, once you’ve got that down, the politics can glide sneakily over the top.

Once I arrive at the studio, I usually write for a couple more hours. Sometimes it’s notes on books I’m reading for my PhD, but right now I’m going through the final edit of another novel that is due to be published in January (and hopefully still will be). It’s hard not to let the coronavirus seep in, and rewrite every other line as ‘Tories Out Now!’. I have to remind myself that just because something is at the forefront of my own mind this doesn’t automatically make it compelling for the reader. I imagine there’s lots of other writers and would-be writers also stuck in this predicament, and wondering how to make the interesting times we’re living through equally interesting on the page. My advice would be that yes, the best literature always does more than merely entertain but nonetheless it does entertain; so, see the entertainment as the foundation for your work, and then, once you’ve got that down, the politics can glide sneakily over the top.

As my new book’s protagonist is a cellist, I like to have Bach playing in the background. I’ll plough through a few pages, and then sit back and listen to one of his suites. Then I’ll go again. When laptop fatigue eventually sets in, I turn the volume up full blast and make coffee. PRIMARY used to be a primary school – hence the name – and my studio overlooks the playground. If I see one of the other artists, writers, or musicians down there, then I’ll go out and say ‘hello’, and if the weather is nice then we might even eat our socially distanced lunch together. I do miss the buzz of sitting in cafes and libraries – the romantic feeling of being out there ‘being a writer’ – but at the same time this, current situation provides me with just the right amount of social interaction not to feel too lonely and get stuff done.

If this is the case, then I’d say try to relax and remember that anything that nourishes and expands your mind will help your writing in the long-run.

And then that’s it for the laptop. The woman who rents the studio directly below mine is a potter, and at my request she’s started leaving bags of clay outside my door. Previously, I’ve always made paintings, but there’s something very soothing about sticking your hands in a big bag of clay, especially now. The local wildlife trust has installed nesting boxes for peregrine falcons somewhere nearby, and as I try and work out how to make the wet grey mush in front of me relate to my more usual gilt-edged, chequerboard constructions, I’ll often see one of them swoop down and kill a pigeon. Like my morning walks, I don’t know how much attention I’d give to this scene normally, but now it seems full of pathos, and almost overwhelmingly so.

As the afternoon draws to an end, I’ll use the last bit of quiet time to do some reading. I’m really enjoying a book by Wayne Koestenbaum called The Queen’s Throat. Koestenbaum isn’t so well known outside his native America, but he really should be, and even though The Queen’s Throat was written in the early-eighties the way it talks about gender, sexuality and music feels completely fresh. Contrary to popular opinion, I don’t think that any creative person can be successful unless they’re constantly looking beyond their own experience. My way of coping with stress has always been to instigate a routine, but I know this doesn’t work for everyone, or is even possible for everyone. If this is the case, then I’d say try to relax and remember that anything that nourishes and expands your mind will help your writing in the long-run. It doesn’t have to be another author’s book, it could be a film, or a photograph, or a painting; anything that takes you outside yourself, even if it’s only for five minutes, can lead to great things.