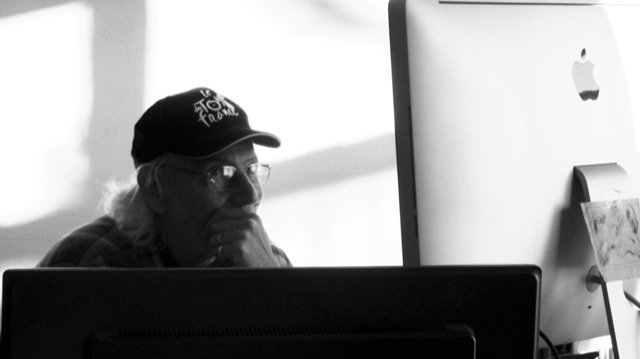 Our chair, David Belbin, writes: This is the tenth week of lockdown and, as the NHS weekly clap comes to an end, so does this series. I’d like to thank all of the writers who contributed so speedily when asked and have given us such interesting insights into their lives. Do read the ones you’ve missed. Over the coming months, whatever the challenges, Nottingham UNESCO City of Literature will do what we can to bring our city’s writers together and help everyone to build a better world with words.

Our final guest is cartoonist John Clark, better known as Brick. He’s been drawing, writing and editing comics for over forty years. He has twice been nominated for an Eisner award (the comics Booker prize) and is the UK’s only honorary visiting professor in comics. His work is often concerned with the environment and social issues. It includes the UNICEF All Children Have Rights series and, for NUCoL, stories in These Seven and Dawn of the Unread. His most personal book is the ground-breaking 2010 graphic novel Depresso. Since then he’s published East of Aleppo: Bread, Bombs and Video Clips with Five Leaves, who also gave us his remarkable travel book, After the Goldrush. He lives in Daybrook with his partner, ceramicist Sandy Bywater.

There were challenges, like keeping my hearing-impaired, dementia bamboozled prehistoric parents safe from ninety miles distance. Similarly the insanity of trying to bury a Covid victim when the funeral directors refuse to touch the coffin was a trial. Otherwise lockdown has been a breeze, but then I’ve been self-isolating for over fifty years. Okay, as a lifetime puffer, it’s been a strain weaving between potential plague carriers but in the best of ‘normal’ times my size and appearance, now sporting an aggressive samurai chonmage (to my chagrin), have always parted waves of incoming, no problem.

We’ve worked in China, shopped in ‘wet markets’. Weeks before the muppets who run this country computed something hailing from the Celestial Kingdom combining the words ‘virus’ and ‘corona’ might be a tad detrimental to stiff-upper-English-twits we were on it, hoarding. We ordered in a pallet of clay (my partner’s a ceramicist) and filled the car with everything a DIYer’s wet dream might ooze over. Then we toured the city scavenging wood from skips. As inveterate adventure cyclists/canoeists, food was never going to be a problem for people skilled at surviving on ‘see-food’ (see it, buy it, do something tasty with it). On March 23rd we sat on the settee, watched the Prime Muppet fudge a lockdown, and felt smug.

Like everybody else in the comfortable West, we proceeded to sort home and garden to within an inch of their lives, and then started on optional extras. Shelves, bird boxes, raised beds, a cabinet, a bug motel – all manner of imaginative things cobbled from old pallets and rip-out wood issued from our garage workshop. Then we ran out of space and resorted to the more traditionally creative activities that are our trades, her making sculptures and pots, me… well, I was kind of warming to the idea of slipping into retirement, but what can a satirist do when faced with Bozo and his Poodles providing such an unbelievable wealth of material?

We established a regime. Up at 6:30 for brekkie in bed then up again at 8:00 for daily exercises followed by a couple of hours heavyweight reading. Sure, we read during the course of a ‘normal’ day, except this slot was dedicated to tackling the tomes we’d accumulated over the decades but never had the brain muscle to wrestle to the ground. She did a lot of Buddhist tracts, I ranged over polemics and academic works on Vietnam, the American West and trees`n’woodlands. We both threw in the odd classic novel for good measure, but only Bao Ninh’s brilliant The Sorrow of War rocked our boats.

Lunch coincided with Radio Four’s World at One, a lousy excuse for a news bulletin. We rushed to turn off before their invited star of novel and poetry doused the nation in literary sneezes from their Suffolk ‘booshway’ swaddle. Then down to work proper, punctuated by a few adventures into skills we didn’t but really ought to have, like taking a half decent photo of a ceramic still life and filmmaking. Oh, the joy of the net! We’ve yet to hit a wall somebody else in the world hasn’t hit and felt compelled to splatter the work-around across our screens.

Oh, the horror of the net, the intranet and goddamn Zoom! I kid you not, I walked into our back room one evening to find my partner on the floor, cross-legged, silent and meditating while not watching somebody Zooming from the Buddhist Centre’s shrine room, silent, cross-legged, meditating, maybe not even breathing, judging by his total absence of movement. And it got better. Ostensibly she was still doing the day-job, trying to set up ESOL distance learning for her asylum seekers and refugees, people who have neither the dosh for laptops nor the language to fathom the depths of Nottingham College’s intranet. Finally the college realised it was on a hiding to nothing and suggested she might be better employed cleaning her bathroom (which is my job, incidentally)!

I forced myself to confront the horror of Zoom to interact with Nottingham’s Film Free and Easy. It was most entertaining, and I learned stuff but, man, was it draining. It was worryingly evident that my partner was similarly having the life sucked out of her by college Zooming, Buddhist Zooming, women’s walking group Zooming, greater family Zooming, yoga Zooming and bloody Grayson Perry Zooming. I could see it coming and, yes, several days of productivity were lost to days in bed with banging migraines and scrunched neck muscles.

We worked and talked and giggled and clapped together, and were delighted to discover that after decades in a torrid relationship we not only loved each other to bits but liked each other the more. In the evening we parted, however, her to plough through Madam Secretary and centuries of Star Trek, me to discover and devour as many recommended South Korean and Vietnamese films as found lurking on the net for free. But it wasn’t all fun and games.

On City of Literature’s recommendation, I had applied for the residency at Bucheon, South Korea (hence the South Korean flicks). Since the city’s strongest literary tradition is their Manhwa comics, mostly ‘webtoons’, I figured I was in with a resounding shout. Crestfallen when China exploded, I moved on. Then I had an email saying it had been postponed for a year, then an email saying it was sort of back on and I hadn’t been successful, then an email that was some pseudo Situationist rant against the mediocrity of ‘institutionalised art’ and the residency programme (if I read it right, and it didn’t merit a second read to check) by one Mo Abd-Ulla of VOID, whatever that is. Yup, the world was going stir crazy!

It has also been a bad time for our dog cravings. Ours died last year and we put on hold getting another until we’d satisfied a wanderlust accumulated during the years she was with us. North Vietnam, the Punjab, the North American deserts all had folders we’d been slipping cuttings into, none of which are going to happen any time soon. Our K9 cravings were racking up commensurate with the gathering garrulous clouds of our depressions.

What joy, we found somebody else’s Collie to walk that wasn’t knackered. Meantime, I finished a comedy novella about austerity, wrote a couple of short stories and a comic script for somebody else to illustrate, and banged out a load of snippy ‘toons. She built a website, a gallery of beautiful pots and a lovely sculpture of Green Tara. Who the hell wants to get back to ‘normal’?