Our chair, David Belbin, writes: Cat Arnold is a popular historian who began her writing career as a novelist and journalist on the Nottingham Post. A former City Councillor and Sheriff of Nottingham, she was, in her council role, a founding board member of NUCoL. She lives in Sherwood with her husband, Mark, and younger daughter, Alice. Her most recent book, Pandemic 1918 (Michael O’Mara Books) is remarkably timely, as she discusses below.

Woken at dawn by the dead creeper tapping its bony fingers against the bedroom window. Make tea and see husband off to work (he’s an essential worker in the water industry) and read newspapers online. Share the latest article from Laura Spinney, a fellow Spanish Fluencer, in the New Statesman. Laura’s piece is bad news for anyone hoping we’ll be back to normal soon, predicting social distancing into 2022. Meanwhile, new figures show coronavirus death rising in the North West of the UK. Just as in 1918, there’s a strong correlation between social deprivation and susceptibility. Meanwhile

The landscape gardener is due at eight to take down the creeper. It stealthily infiltrated our house from next door, and I want rid of it. By half eight, there’s no sign of the gardener. When I ring, he can just about croak coronavirus and apologise for not showing up. I beg him to focus on recovery and say the job’s still his when he wants it. Terrifying to think of losing your livelihood to the virus. That vine isn’t going anywhere.

Neither is my car, as I prepare to embrace the new normal and participate in the ritual queue outside Sainsbury’s. The battery is a dead as the vine. There’s nothing else to procrastinate over so I go up to my office, the tiny box room where my laptop lives. I’ve only had A Room of My Own for two years and it’s still a novelty to be able to shut myself away. The cell-like proportions remind me to catch up with the next episode of The Corrupted, G F Newman’s towering drama crime drama, but it’s going to have to wait until I’ve responded to interview requests and a slew of emails cancelling my talks.

Listen to Deborah Levy on the radio, talking about social isolation. Someone told Levy that as a writer she should be used to it. But I’m nodding in agreement as Levy says isolating yourself from choice is totally different from lockdown. A spell in isolation is fine for a few hours if you can go swimming afterwards or head for a bar. Try not to think about all the things I can’t do right now, from Broadway, followed by a large gin next door in the Lord Roberts, to the Playhouse, which had such a great season lined up, to hugging our eldest daughter. As if psychic, Eldest Daughter sends a shot of the car park at her head office looking like a scene from 28 Days Later.

London Girlfriend stranded in France emails saying she’s run out of clothes but bagged a hairdresser’s appointment for the day after their lockdown. French Girlfriend, living on a boat in Finistère, is weathering it all with Gallic nonchalance and an impressive collection of fishermen’s sweaters. Kiwi Godfather is surviving in Auckland posting family pictures on Flickr, providing a fascinating archive of Jewish life in 1930s London. Lockdown in Sherwood is less exotic than NZ or France, but at least I’ve got my husband and younger daughter with me.

My US and British publishers are rushing out paperback editions of Pandemic 1918 on a wave of interest in Spanish flu. Our latest Armageddon has created fascination with the previous one. In my new role of pandemic content provider, I answer requests from reporters and editors desperate to fill space. As an asthmatic, I feel guilty that I haven’t been able to contribute during lockdown. But at least I’m able to provide some education and information.

I check in with my Open University students. Like most other institutions, the OU has abandoned final exams and coursework this year and students will be assessed on their grade average. While some have welcomed this, as they’re already under pressure, one or two need reassurance. Note that, as ever, the highest performing students are the most anxious.

Spend a couple of hours trying to focus on my memoir. London in the 1980s was a traumatic phase of my life, but now it seems like a golden age. I read through old diaries with the awe of a Classics scholar stumbling upon a lost stone tablet. 1986 is a lost paradise of pubs and theatres, parties and bars. Travelling to work on the 14 bus and getting dumped in the Chelsea Arts Club seems exotic and glamorous in recollection.

A car screeches to a halt outside. As Claire Grogan’s Happy Birthday blasts out, a bunch of hoodies descend on the house opposite for a socially-distanced drive-by birthday celebration. They linger long enough to congratulate our neighbour. I run downstairs and add my good wishes. It’s tough having a birthday under lockdown, as Alice discovered earlier. She’s having an Official one later, like the Queen.

The reporter from the New York Times calls and I have the surreal experience of sitting at my own dining table talking to a complete stranger about the lessons we can learn from Spanish flu.

Record an interview with Ira Flatow for Science Friday via Squad Cast. Ira is erudite but approachable like a popular teacher and I am wildly impressed that he’s guested on The Big Bang Theory, twice. I talk about the Anti-Mask League, a pressure group from San Francisco who refused to wear masks during the third wave of Spanish flu, in November 1918. Composed of libertarians, doctors and cranks, the Anti-Mask League maintained that being forced to wear masks was unconstitutional. Reasonable at first, submitting a petition to the mayor requesting a lift on the mask orders, their tactics became increasingly disturbing. On December 18th, an IED composed of an alarm clock and 3lb of gunpowder was sent to the public health office with a message reading ‘compliments from John.’ The device did not detonate, but in January 1919 the mayor’s office relented, though warning protestors that without masks, the death rate would spiral. Within ten days, 300 flu deaths were reported. I talk about contemporary parallels including those disturbing scenes from Michigan showing armed anti-lockdown protestors invading the capitol building and calling for the murder of Governor Gretchen Whitner.

Go downstairs for a workout. My life used to revolve around exercise classes but since lockdown I’ve developed my own routine. Kickboxing with my old boxing gloves, weights with cans of chickpeas, dips with the coffee table and a 2-litre bottle of water for squats and lunges, all powered by David Guetta, Lady Gaga and Pat Benatar. Feel better but miss the camaraderie of a gym class. 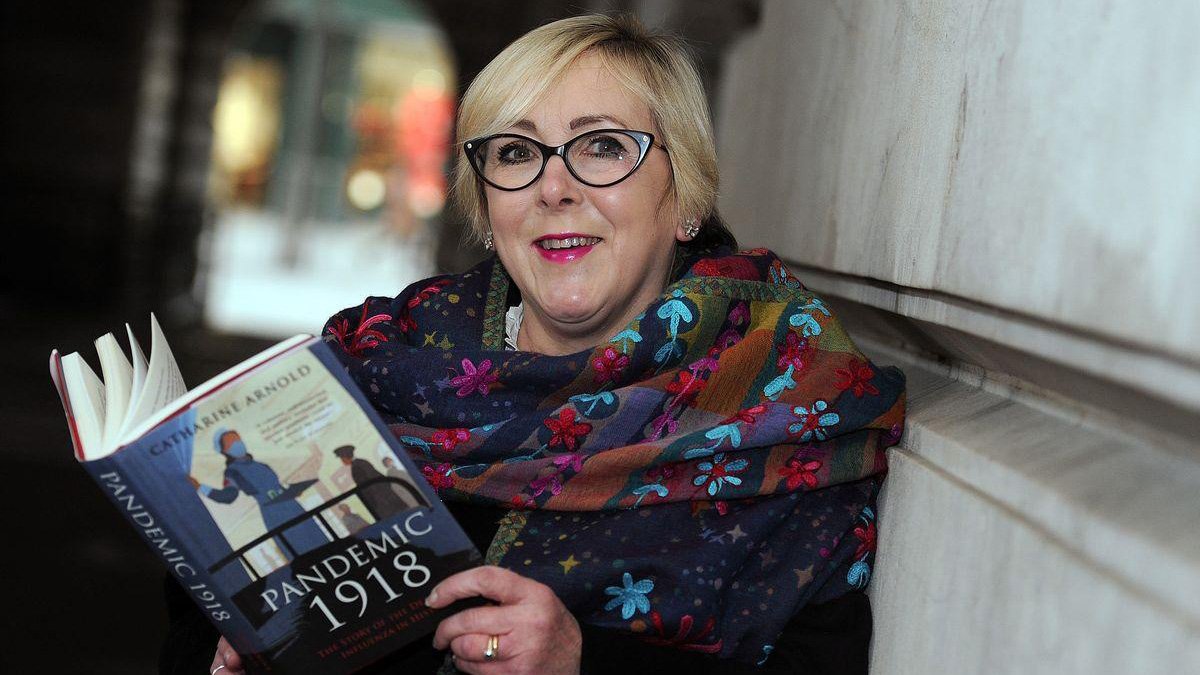 Cat and Pandemic 1918 (Image courtesy of the Nottingham Post)

In the afternoon there’s a webinar, designed to keep a law firm entertained and informed. Nervous about speaking to all those well-groomed lawyers in NY and LA, I have a Legally Blonde moment about my flat hair. Then Alice comes in with a big can of spray and points out they will have flat hair too. The partner hosting the webinar is professionally intense, grilling me like an expert witness on the stand, pressing for mortality figures and why there was never a public enquiry. By the time we’re done, I need a drink, but I can hear my husband jump-starting the car and I need to get that shopping.

Outside Sainsbury’s I find emails from CNN and TIME magazine and a reporter wants me to call him at The New York Times. I email back that I’m waiting in line at the grocery store. In the queue behind me, a young lad with a tie-dye scarf swathed over his face chides me gently for not moving forward fast enough.

Back home I speak to CNN for a programme next week. The reporter from the New York Times calls and I have the surreal experience of sitting at my own dining table talking to a complete stranger about the lessons we can learn from Spanish flu. I tell him that we are all finding common ground because of the virus. It’s like World War Two except we’re all on the same side. Afterwards, I pour a large gin and plan to watch the end of I Am Not Okay with This, a teen with superpowers drama elevated by its LGBTQ element and a great score by Graham Coxon. He’s created an imaginary band called ‘Bloodwitch’ for the show. It’s one of the best things on TV right now but admit that’s because I’m besotted with Sophia Lillis. I could watch her all night.

Eventually get to bed and remember the landscape gardener and hope he is okay. It’s another windy night and the vine is tapping against the window, reminding me of my mortality.