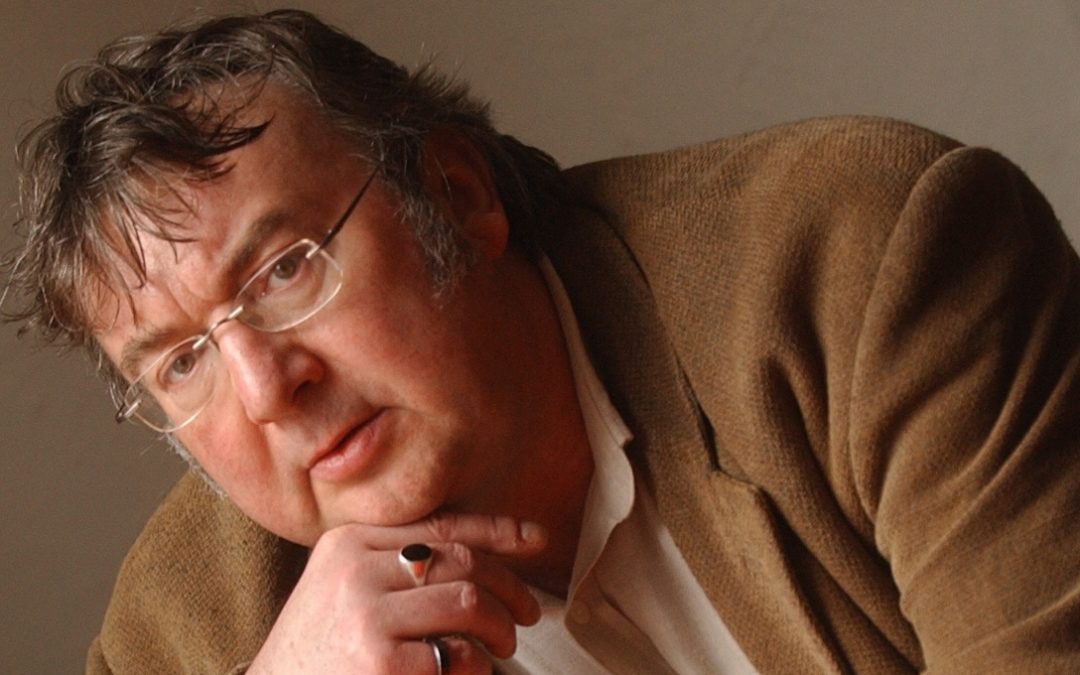 For the second of our Life during Lockdown blogs, I’m delighted to welcome Michael Eaton, one of the original patrons of our UNESCO Creative Cities bid. Michael is a screen-writer, playwright, radio script writer, adapter of Dickens, silent film historian and a former Visiting Professor of Creative Writing, amongst many other things. He divides his time between Nottingham and Brisbane, but is currently living on his own in Nottingham, for reasons explained below

HALF-LIFE IN LOCKDOWN DAY THIRTY PLUS.

Yesterday was the hebdomadal trans-hemispheric Trivia Quiz with nine of my Australian relations. Today inaugurated a poetry session with more immediate members of the antipodean diaspora. My partner in life is on the front-line as a midwife in a town like Alice Springs in Central Australia which seems, as yet, to be mercifully virus free.

My dear daughter in inner-city Brisbane is now working from home, though she got to hang out with her erstwhile Nottingham chum Fearny when Sleaford Mods slipped through south-east Queensland shortly before intercontinental flights were subject to constraint. And my grandson, isolated in an outer-suburb, is unable to complete his college course.

The Zoom conference (and who amongst us had heard of that now indispensable connection a month since?) proved frustratingly impossible but the four of us managed some kind of concert via Skype and FaceTime (other quasi-magical now quotidian methods of association). My furthest and dearest produced a far more imaginative repertoire than I managed to muster. Kerri-Anne discovered a lovely tribute to Marianne Faithfull by Patti Smith – all the more moving as I hadn’t realised Marianne has been hospitalised by the virus(she was released last week after 22 days). Leif performed a rap by Kate Tempest, who had also recently passed through Brizvegas, the River City. And Linus – a chip off the old block – recited a cycle of limericks concerned with euphemistic adventures of a Young Man from (where else?) Nantucket.

I played it safe. Last week I’d been re-reading the Rubaiyat of Omar Khayyam, the Persian astronomer poet, in the much-loved quatrains of Edward Fitzgerald’s translation because I’d been wondering when we will ever again share a loaf of bread and a flask of wine in the wilderness or anywhere else. Momentarily close. So very distant. The hangars of Birmingham Airport – my liminal point of departure as a frequent flyer from Dog End Alley where I live, near the Arboretum, to the Sunshine Coast – have, I learn, been transformed into a temporary mortuary. What with the drought, the bush fires, the floods and now the pestilence the Four Horsemen haven’t done much stabling of late. Another three weeks, at the very least, of repetitious routine with scant redeeming ritual. Stuck here in the Forest with Mooloolaba blues again.

I had been much looking forward to premiering a show at the Shots In The Dark festival in Broadway at the end of May. Shots had originally been conjured up with my close friend Adrian Wooton. He was then the Director of Broadway, the recently re-opened media centre in the Lace Market – one of the city’s crowning glories – and is now CEO of Film London.

We had travelled together to a festival in Cattolica, Italy, I can’t quite remember the exact date, but a European football competition was on – it was the Nessun Dorma year when Gazza cried for some reason. Matches were being played in a stadium up the coast in Fellini’s Rimini where England fans were up to their characteristic shenanigans. The Italian cops, whose gauntlets have never been known to be made from velvet, rounded up a bunch of these embarrassing ambassadors and unceremoniously bundled them onto a plane back to Blighty. One of those thus scooped up was an innocent dad out there with the family for a seaside holiday. He had popped out of the hotel to buy a packet of fags only to be dislodged on the tarmac at Stansted with the wife and kids back in Italy wondering why he was taking so long.

The Noir In Film festival proved to be momentous. Along with the international premieres and rare retrospectives there were book launches and a live recording of a radio version of The Big Sleep in Italian. One lunchtime Adrian and myself were enjoying fritto misto in a small ristorante overlooking the Adriatic when the germ (unfortunate word these days) of a notion seemed to arrive simultaneously: We could do this back in Nottingham. The restaurant cleared but we continued to fantasise.

The patrone mimed he was going home to sleep before the evening rush but – I still find this amazing – left us his keys and indicated we could stay as long as we needed. He must have sensed we were men on a mission. We proceeded to drink our way through the contents of his bar, noting down on a napkin each swallow of the oily spirits and sticky liqueurs, Sambucca, Strega, Grappe, Veccia Romana, so tantalising when abroad but when subsequently purchased in the Duty Free lounge will remain at the back of the drinks cabinet back home until late-night dire need. When we had done plotting and planning we left a pile of Lire – so much more graphically spectacular than the bland Euros of latter days – locked the door, shoved the keys through the letter box as requested and went off to watch, perhaps not inappropriately, Curtis Hanson’s Bad Influence. Grazie multo.

Though Adrian has always graciously credited me with being the co-founder of Shots it was his knowledge and dynamism which made a swirling fantasy a successful reality. Not least because he had met a young Angeleno cinéaste in, if I recall, Amsterdam and persuaded him to present the British premiere of his unreleased first feature in Nottingham. Thus it was that the ever-amenable Quentin Tarantino unveiled Reservoir Dogs on Broad Street. He gobbled up Nottingham – we even chauffeured him to see the Major Oak – and returned to secretly present ‘? A Mystery Film’: the first British screening of Pulp Fiction. But I regret he has not yet made a revisionist version of Once Upon A Time In Sherwood Forest.

My contribution to those early days of Shots was far less entrepreneurial though, inspired by that Italian template, I did somehow write an original drama every year to provide a live theatrical side-bar to what was essentially a celebration of the crime and mystery genre, not only in cinema but also in literature. I could go on about how we journeyed to Pasadena and Toronto to win the Olympian bid to host the Bouchercon… but as I’ve said so many times it has almost become a catchphrase, every crossword solver knows that ‘nostalgia’ is an anagram of ‘lost again’.

After a lapse of many years, in 2018 Caroline Hennigan and Steve Mapp of Broadway, to their great credit, made the momentous decision to revive Shots In The Dark, again under Adrian’s patronage. Smaller, more modest and devoid of the extravagant lunacy accompanying the initial outings, there would be an innovation: welcoming a Guest of Honour. In the first year it was Bertrand Tavernier, last year Jeremy Thomas and in 2020 it was going to be a chap who grew up round here (if you count West Bridgford as part of the city – I always get a bit wobbly crossing water): Stephen Frears. This would have been an inspired invitation as Quiz has proved to be a great hit of the lockdown.

Earlier this year (when we were still allowed to practice sociability, remember?) I convened again with Adrian, this time in a gastro-pub in Tufnell Park, where we once more ordered fish and where he prevailed upon me to write a theatrical show for this year’s festival, just like the old days. Did I have any ideas?

As it happened… I did have something that might just fit. I’d been plotting with another cherished co-conspirator: Giles Croft, erstwhile Artistic Director of Nottingham Playhouse, who had directed two of my plays in that other jewel in the city’s cultural crown.

We had been mulling over the possibility of a drama about an all-but-forgotten incident in Nottingham back in November 1977 when the trial took place under the Indecent Advertisement Act of 1899 over a word on the cover of the record album Never Mind The Bollocks Here’s The Sex Pistols.

Primary research has, naturally, been suspended. I was, for instance, expecting a call from Sir Richard Branson (Britain’s Best Loved Businessman) from the British Virgin Islands a couple of weeks ago, before he had more pressing items on his agenda.

The head of Virgin Records had secured the services of John Mortimer QC and the expert testimony of the Head of English at Nottingham University to defend freedom of speech… and Johnny Rotten had lit up a ciggie in the Public Gallery of the Magistrates Court.

Enough! If you want to know more you’ll have to come to the show.

With Broadway’s enthusiastic support (this was a courtroom drama so, without stretching a point, fitted the bill) I was going to unleash this serio-comedic entertainment at this year’s Shots In The Dark. Now, of course, all is postponement, and who knows when it might be put before an audience? But writing the damned thing has propelled me through the past weeks of social, physical and, increasingly, intellectual isolation.

Primary research has, naturally, been suspended. I was, for instance, expecting a call from Sir Richard Branson (Britain’s Best Loved Businessman) from the British Virgin Islands a couple of weeks ago, before he had more pressing items on his agenda. Daily the piece has become more devious, more diversionary, more delirious, departing from what began as a simple narrative of a footnote in the history of free expression which took place in our city into dark corners of Nottingham in those not-so-dear dead days beyond recall and, increasingly, into the anthropological origins of story itself.

The show will be visually spectacular. I would be playing all the parts. I had already ordered costumes, hats and wigs. My wildest dreams may well remain within my stir-crazy head, as I bounce around these cabin-fevered walls. Has writing been keeping me sane? Or shunting me toward the threshold of dementia?