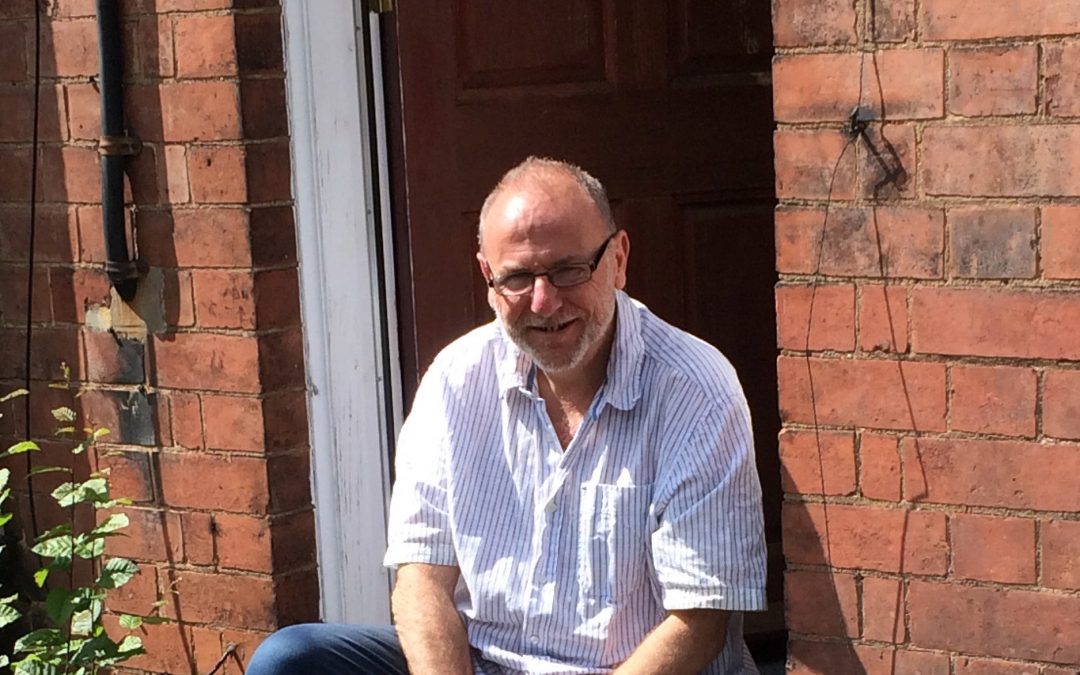 The Coronavirus crisis poses existential questions for The Arts as for so much of society. Everyone at NUCoL is doing what we can to adapt to the new situation. Our mission remains the same, building a better world with words, chiefly by fostering literacy and well-being through creative writing. In particular, we’re supporting our young people and our city’s writers, whose work was recognised by Nottingham’s UNESCO status.

Reading and writing are crucial tools to help us through these times. I have three books on the go, a challenging novel, a huge, fact-filled biography and, my bedtime comfort read, an omnibus of 60s novels by the great US crime writer, Ross MacDonald.

Most of the creative writers I know are, like me, not finding it easy to write much at the moment. There will be fiction and drama set during the lockdown. There are already some good poems. But for now the main thing I find myself writing are emails to friends around the country, and the world. How is it where you are? Friends have never felt more remote, yet our experiences have never been more similar. Our world is a small place where, like it or not, everyone is connected to and affected by everyone else. After we do get through this, a lot of things have to change. I hope our being one of the 180 cities in the UNESCO Creative Cities Network will help us to make those changes, finding ways to collaborate in making the world a better, safer place.

The kind of writing most suited to the current crisis is undoubtedly memoir. Emails, facebook posts, tweets and blog posts are often my most relevant reading. This week my friend, memoirist Graham Caveney, wrote to offer us a very interesting essay he’d written for his agent’s website, thinking we might like to share it on the NUCoL site. We’ve decided to make this the first in an occasional series, Life during Lockdown. I’ll curate the pieces and welcome contributions from other city authors (email chair@nottmcityoflit.org).

Graham is the author of books about Allen Ginsberg and William Burroughs, along with, more recently, the prize shortlisted memoir, The Boy with the Perpetual Nervousness, which I highly recommend. It bravely documents shocking abuse he went through as a youth, but is far from a misery memoir. A former journalist and worker at Five Leaves Bookshop, Graham now lives in Beeston, where he recently completed his second memoir, with the self-explanatory title, On Agoraphobia. For somebody who has trouble leaving the house, the lockdown may not necessarily be such a bad thing. Find out below how he’s getting on:

‘I have no idea what’s awaiting me, or what will happen when this all ends.‘

My agoraphobia support group now meets via Zoom. Same day, same time: everyone is agreed on the importance of maintaining structure. We materialise like actors in a TV mini-series, the screen rendering familiar faces unfamiliar. We look translucent, bathed in radioactive halos. The ex-security guard has shaved off his goatee. The woman who never takes off her coat has taken off her coat. Her image flickers, keeps cutting out. We hurry through our weekly check-in, voices tech-distorted, anxious to talk about what everybody is talking about.

One woman says, I don’t see people, I see petri dishes. Another can barely contain her embittered satisfaction. She says, I watch the news and think: Welcome to my world.

The much-touted ‘new normal’ isn’t new to us.

‘Stay at home and away from others.’ So read the guidelines, instructions like a parody of Buddhist haiku. It is a practice this group has been following for years, our second nature if not our first. It should be music to our ears. For once we are in vogue, ahead of the socio-medical curve. Most people with mental health issues have spent lifetimes being told by medical professionals how important it is for us to leave the house. Now those same professionals are telling us how important it is for us not to. Should we not be dancing in the proverbial streets? Those streets we have spent years avoiding. On which we are no longer allowed to set foot.

Sufferers of anxiety spend a lifetime catastrophising the future. And so when an actual catastrophe arrives it can come as something of a relief. Our much anticipated worst-case-scenario has finally arrived; it is now everyday life. So this is what it feels like, the actual fear rather than a fantasy of it. The very worst has happened. Our dread is vindicated, rubber stamped. And it is not as dreadful as we imagined. Because nothing could be. The anxious imagination outstrips reality at every turn.

Self-isolating it is being called, as though mere isolation were not weighty enough. The phrase sounds crushingly contemporary but can be traced back to (at least) 1873 and Wilkie Collins’ No Name, a novel centred around disguise and dubious legitimacy.

The book contains one his most memorable grotesques – Mrs Wragge, a half-witted giant married to a duplicitous Captain. Whenever he verbally attacks her, Collins asks: ‘Was she still self-isolated from her husband’s deluge of words? Perfectly self-isolated.’

Self-isolation: refuge, then, as well as quarantine.

A fear of going out is different from a law against doing so, but the two can form an unstable coalition. Both my neurosis and my government insist I stay at home. They agree it is the best way to keep me safe. I am moving from cannot to must not, my phobia blurring into state-sanctioned prohibition.

Please Mind the Gap. Thus do London’s tubes remind their customers to be spatially aware. The advice now sounds eerily quaint, a steam-punk throwback to a world still discovering far-fetched concepts like Health and Safety. And when such things were still viewed with suspicion, the punchline to a tabloid joke.

Mind the gap – as evident between generations as it is between the customers queuing outside Sainsburys. Hands up who knew how long two metres was. Now put them down if you are over fifty. In the course of four weeks I have become a metric convert. I calculate the distance between myself and other people via an imaginary index of nasal emissions and mucal spray. We look at each other and apologise with our eyes: the only thing visible above scarves or medical masks.

Agoraphobics are never short of reasons to stay indoors. Now we have hit the jackpot. Infections doubling every three days. The government’s daily message switching tones: Stay At Home – from plea to instruction to threat.

Contagion fear allows me to avoid confronting neurotic fear, lends respectability to my avoidance. Agoraphobia is the right thing to do.

And yet the collective fear is also cancelling out more specific fears. The supermarket was one of my most pronounced phobic sites. Its crowds and congested aisles used to make me hyperventilate, drop my basket and run. Now it feels welcoming, a place of solidarity. One in, one out, security guards and orderly queues, the once unmanageable chaos of shopping finally feels managed, held.

Stay At Home. The injunction depends on the kind of home you have. I am lucky, I have a garden. I have spent more time there in the past week than I have in the last ten years. Spatial capital. I feel pity for the friends whose slick single flats I used to envy.

My girlfriend Emma has moved in, three weeks now. We can’t be the only ones being forced to road test their new relationship. A new genre may emerge – accidental co-habitation – the dystopian rom-com.

Emma and I are inoculating ourselves with books, looking to narrative to offer tentative reassurance. We seem to be drawn to reading about the experience of war: Olivia Manning’s Fortunes of War, Pat Barker’s Regeneration novels, Jane Gardham’s Old Filth . It is an obvious enough reference point, although I suspect the fact that they are all trilogies is just as important. One book holds out the promise of the next, giving shape and sequence to an experience that has neither. These books somehow guarantee the future.

I wonder where the pedlars of religious apocalypse have gone. Like every other trader they have been banished from the high street. There was one particular man who used to stand in Nottingham’s Market Square near where I live. Occasionally I would stop and chat to him, ask him how he could be so certain of his predictions. He told me he had repented, accepted Jesus Christ as his saviour. I imagine him now tucked up in his bedroom, surveying his supplies of tinned food, a maniacal prophet delighting in the torments of the damned.

Not that I feel like the damned (although I’m sure the damned never do). If you had asked me a month ago to imagine a world without cinemas, theatres or libraries, I would have said it sounded like a vision of hell, the setting of a post-apocalyptic movie. Yet apocalypse is precisely what this is not. It is closer to entropy – the random energy produced by molecular disorder. It is empty trams as well as full-to-bursting hospitals.

Every Thursday night at 8 pm the doorstep applause, erupting like a three minute punk track, cacophonous and uncannily crisp. I imagine the noise recorded by Steve Reich or Phillip Glass, a minimalist fanfare, a soundtrack both oceanic and impersonal.

I take my one walk per day, stride briskly around the local park. I have had my share of therapy here, stood with clinical psychologists armed with bio-feedback machines and betablockers as I tried to control the mounting panic. The aim was to desensitise my nervous system, re-programme the cognitive associations between empty space and fear. The focus was on breathing, a steady heartbeat, teaching the so-called sympathetic nervous system that it had no reason for either flight or fight. The psychologist used to say I should come here daily, that repeated exposure would eventually produce a phobia-free response.

He would say, You will get there eventually. There really is nothing to be frightened of.

Graham Caveney is the author of The Boy With The Perpetual Nervousness (Picador, £9.99)

His next book On Agoraphobia will be published by Picador in 2022.