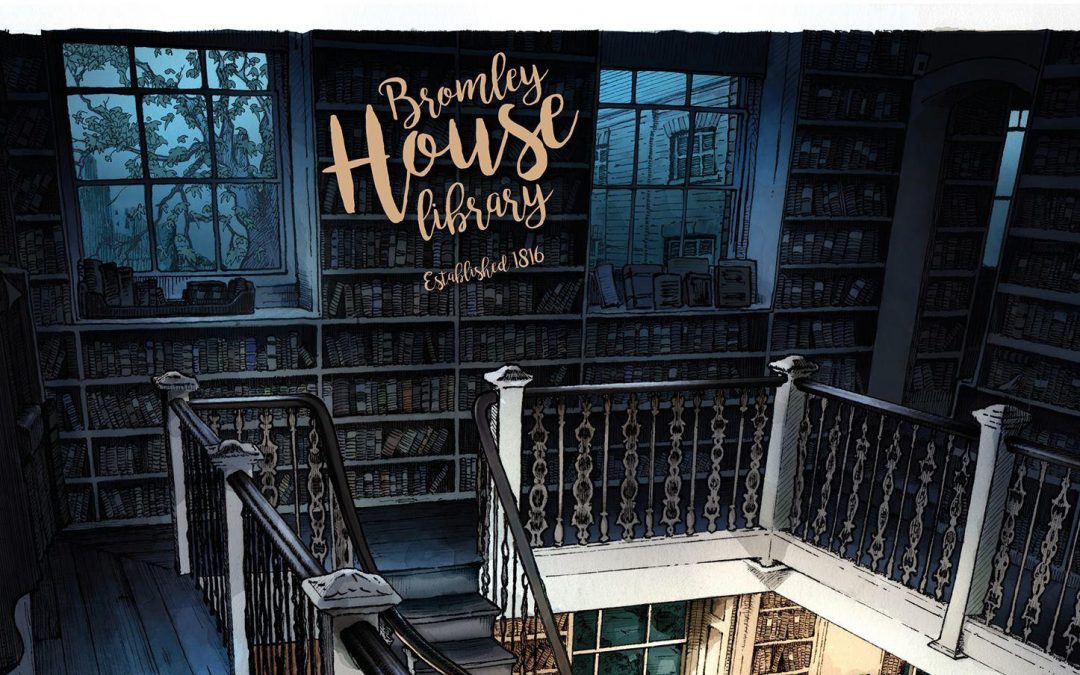 Bromley House was built in 1752, for Sir George Smith, a member of the famous Smith family behind the country’s first private bank (now a NatWest in the Market Square, sandwiched between Burger King and a Wetherspoons). Smith named the building Bromley House after his son changed his name to Bromley.

In 1816, a group of professionals founded the Nottingham Subscription Library and, four years later, they purchased Bromley House for £2,750. In 1822 they moved their library there from Carlton Street. It was around this time that the writers William and Mary Howitt moved to Nottingham and one of the first things they did was join the Nottingham Subscription Library. Mary wrote: “The remarkable well-supplied library at Bromley House furnished us with the constant stores of literature.” The Howitts remained members until 1836.

Bromley House is a charming Georgian building. Emrys Bryson in ‘A Portrait of Nottingham’ wrote that, ‘Bromley House was put up so meticulously that its bricks were soaked for a fortnight before being laid.’

One of its most iconic features is an elegant spiral staircase that was added in 1857 by a master craftsman who also happened to be an author. Another favourite attraction is the library’s hidden Victorian garden, one of only two remaining town gardens in the city centre.

It’s a place steeped in history. In 1819, with rumours of revolution, the building was used as a strongpoint by troops, housing a wagonload of ammunition. There is a working meridian line: a small hole in a window sends a beam of light along a brass strip on the floor signalling a true solar noon. It was used to set the clocks of Nottingham in the days before standard time. The library housed the headquarters of the Thornton Society and, on the top floor there’s a studio that operated as the first photographic studio in Nottingham – from 1841 to 1955 – a place where many of Nottingham’s wealthier 19th century families had their likenesses taken. Nottingham’s first professional photographer, Alfred Barber, put in a skylight at his own expense, a circular, glass structure incorporating a cog wheel mechanism that could follow the passage of the sun.

The great inventor Michael Faraday’s name can be seen in an old visitors’ book and the local scientist and mathematician, George Green, a father of quantum physics, was a member. He called Bromley House his ‘first university’: with no formal education, the place was vital in developing his genius. There’s a room named after him.

Geoffrey Trease, in his book ‘Nottingham, A Biography’, describes the library as ‘an unexpected gem of Georgian elegance, its unobtrusive and well-mannered doorway sandwiched between modern shopfronts. Walk in, and you have stepped back two centuries.’

The ‘modern shopfronts’ which currently hug the entrance belong to a charity shop and a newsagent’s, both of which sell books. It was in 1947 that the ground floor was first rented out to shops.

The library currently houses around 45,000 books, lining walls that could tell their own stories in a building described by Pevsner as ‘Very civilised’, and ‘not at all provincial.’

You can see for yourself as the library holds guided tours. Visit their website for details. http://www.bromleyhouse.org/ev…