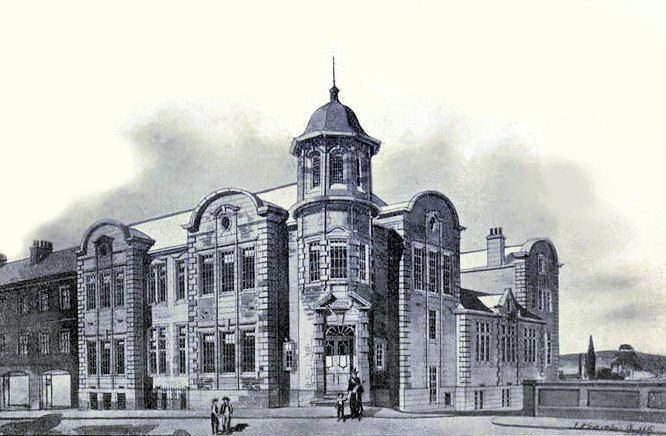 This is Hawick Public Library, the library of a small, working class Scottish town, dominated through recent centuries by the knitwear industry. Though there had been private libraries in the town since 1762, the publicly-funded library service can be dated to 1878. But in 1904 this building opened,a “Carnegie” library. Had you been there on opening day you would have seen the streets awash with bunting and vast crowds jamming the public areas in front of this building and as far as the eye could see along the streets leading to it. A holiday had been declared for the opening. 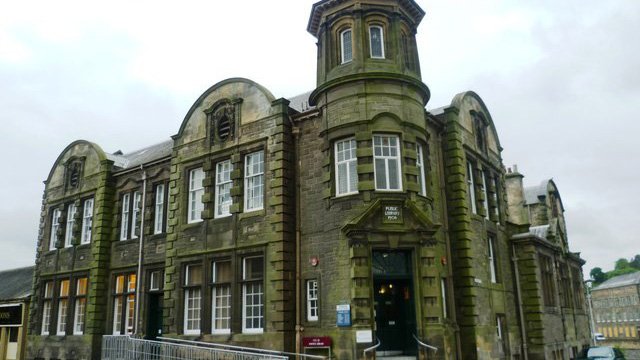 My grandfather was the first person in my family I know who definitely used that library, in the 1930s. He was a commercial traveller (as well as being a Romany Traveller) and was away a lot so my mother, as a child, would get his books out for him. She knew the ticks and marks in the backs of genre books that he and other library users made (to stop themselves borrowing the same books twice). The family legend is that she would walk home slowly reading as she walked – at the time they lived in a small hamlet out of town – and so became something of an expert on the Western in general and Zane Grey in particular, while not yet at secondary school. The Western was my grandfather’s genre of choice.

My mother took me to the library to join the children’s section when I was old enough to read independently and to choose my own books. In due course I moved up from being just a borrower to “assist” the children’s librarian to issue books but eventually became eager to go to the big library upstairs and take out adult books on my mother’s tickets. Anna (we always used her first name) was then – and remained all her life – a regular library user. I left home at seventeen, returning a year later, jobless. Anna went to see the librarian – Miss McIvor! – to ask if she would take me on as a trainee. You could do that then. Miss McIvor said yes and I had a happy year being trained, earning extra money by looking after the room bookings and cleaning on the caretaker’s evenings off. One year later I was off to library school in Aberdeen.

Nobody left without a free book if they wanted one, and the library van was just round the corner to sign people up…

Anna remained a library user of course but could never quite get enough tickets. One time, visiting her home, I found a whole batch of tickets. Some in her late mother’s name, some in my name, some in the name of my then partner. Only when the library changed its policy and allowed twelve tickets per person did she finally admit publicly that her mother was long dead, that I’d left home for good and my partner and I had split up years before. Anna took great pleasure in describing attending, in her old age, a town public meeting held to oppose library cutbacks, heckling the politicians who failed to convince the hundreds of people who turned up to protest.

In her eyes there was nothing better than being a library worker, though bookselling would do. In turn she was pleased that I organised a public letter signed by one hundred local or locally-born writers in protest when Nottinghamshire County Council announced cutbacks in the library service in 2010. Among those signing were Jon McGregor, Julie Myerson, Matt Haig, John Harvey… There was a large public meeting then Five Leaves – at the time only a publisher – was asked by the now sadly late Gail Flack, the senior UNISON shop steward in libraries to organise, well, something. This became a library occupation, a read-out and mass borrow at Beeston Library in which at least 500 people took part. Local authors including David Belbin and Eve Makis read appropriate material. Other readers included Deirdre O’Byrne, a former library assistant at Beeston, now part of the Five Leaves team. Current staff could not take part but they were gleeful about the occupation – and the most book issues they had ever had in one day. There were smaller scale mass borrows in other libraries around Beeston the same day. The protests led to £400,000 being returned to the book fund and a number of jobs being saved.

Prior to this period I’d worked as Nottinghamshire County Council Literature Officer for ten years. The first and last years incorporated the National Year of Reading, a once-every-decade national festival of reading. Whatever happened to that? Libraries were central to the job, whether that be taking newly literate middle-aged women in Manton in North Nottinghamshire to join the library or setting up a large scale poetry series at Newark Library (and a packed night on Mod culture!) or a week of events on sport at Mansfield Library. One highlight was something I’d wanted to do for all ten years, which was to open a library all night, with an arts and literature programme throughout. Southwell Library had been the regular host for an annual poetry festival (which continues around County Libraries as a whole, twenty-one years on) and the staff were up for anything. When I asked if they would stay open all night and help put on a programme of events their only response was to ask what date I had in mind… Every member of the library staff was there at some stage during the night.

There will come a time when the visit to the library will again be a central part of my life, going full circle.

Another highlight was a one day open-air “reading room” where Deirdre, Sheelagh Gallagher and I set up a large “room” in Rufford Park on a Bank Holiday weekend with an ironing board and washing line, standard lamp, rugs, some 1960s’ framed pieces of what could be called art and three ducks flying up the one wall we had… all of the accoutrements of a normal, if surreal, front room with bookcases (one being the branches of a tree), coffee table books, comfy armchairs… and us to talk about reading. We met the most amazing readers like a huge man in a Celtic T-shirt who had read to his sons at bedtime from when they were small children to then, when they were 16/17 year olds. They knew more about children’s and young adult books than anyone I’ve met. Nobody left without a free book if they wanted one, and the library van was just round the corner to sign people up…

Five Leaves as a publisher has a lot to thank libraries for. We’ve had book launches and events as far apart as Dundee and Stoke Newington and from Glasgow to Frome in Somerset. As a bookseller we supply books to Bromley House and to special collections at the University of Nottingham and, in normal times, provide bookstalls and the odd bit of programme advice to Nottinghamshire Libraries. The best day is always the annual Readers’ Day held alternatively in the city and county. Sheelagh and I were lucky enough to be on the organising team of the very first and several more subsequently. It really is the best day for readers in the whole year. I hope, post -Covid, it returns.

Over the last seven years, working in a bookshop, I confess I don’t use libraries much – we have our own events and, well, bookshop staff at Five Leaves get a good discount on books and lots of publishers’ samples, but there will come a time when the visit to the library will again be a central part of my life. Going full circle.

Before working for the County I’d been at Mushroom Bookshop – an ancestor of Five Leaves. The local library would do a monthly visit-buy and then order multiple copies for stock. Strangely, the books that we sold most to them were on amateur winemaking, one of the shop’s odder specialities. The buyer was Alan Guest. Mushroom had something of a history of putting on events in libraries, at a time that was not yet common. We ran several series of events organised by a member of staff, Kate Marsden, and a group of women customers, bringing many feminist and lesbian writers to Nottingham including Maureen Duffy, Sunita Namjoshi, Jane Rule, Jeanette Winterson and many more . In the mid-80s the Government started attacking lesbian and gay rights, primarily through legislation generally known as “Section 28” (of the Local Government Act) which appeared to limit local authorities’ support for their lesbian and gay communities. Mushroom was at the forefront of opposing this, immediately producing a leaflet listing as many writers who were lesbian, gay or bisexual or who had written sympathetically about the issue. Alan got involved and this became a joint Mushroom/libraries project called Unsilenced Voices where libraries produced their own reading list, a small exhibition and we jointly ran a series of readings by mostly gay writers, Adam Mars-Jones, Francis King, Tom Wakefield and Noël Greig) and put on a play by Gay Sweatshop, This Island’s Mine, telling the story of what it meant to be young and lesbian and gay in the 1980s. It was really good to work with libraries on this project.

Nottinghamshire has a long history of libraries, from the old penny libraries prior to the establishment of a public library service. If none of these had existed and I could design a new world the first thing I would want in my utopia is a place where knowledgeable staff help you choose books you can read *for free* then take them back for someone else to have the same pleasure.