Lee Stuart Evans is someone who makes others look good: he’s a comedy writer, providing the lines that get the laughs. Evans’ writing credits include such shows as 8 Out of 10 Cats, Room 101, Would I Lie to You and I’m a Celebrity Get Me Out of Here. A full-time writer of jokes, he has provided the punch for many a well-known comic, counting Dawn French, Sue Perkins, Stephen Fry, Jonathan Ross and Michael McIntyre among his clients. Last year saw the release of his first novel Words Best Sung, much of which is set in the north Nottinghamshire of his youth. Before revealing more about this engaging coming-of-age story, I was keen to know more about his job – writing for comedians.

“There are shows where you write the script and never see the host, but those hosts are usually presenters rather than comics,” he explained. “On 8 Out of 10 Cats, the show I’ve done most – 25 series, if you include Countdown – there might be one or two writers with the performer on the day of the show, and perhaps the day or two before, to bounce ideas round with, talk about the angles and interesting ways to make a dullish story about tax evasion funny for a young late-night audience. A half-hour show usually takes 2-2½ hours to record, and the stories change constantly, lots of items get dropped, new ones added, right up until recording, so you need a small team to help generate lots of material each week, most of which never sees the light of day.”

Of the many shows Evans writes for, the topical comedies are especially challenging. “It’s the sheer amount of material they gobble up,” he said. “We did an 8 Out of 10 Cats show on election night 2017, and we were still writing new jokes in the studio as the first results came in at 10.30pm, while the show was being recorded, and feeding them in during ad breaks, just to be as up to the minute as possible. Really good fun though.” 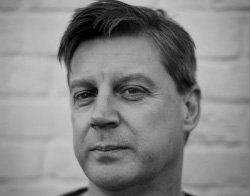 I loved that Lawrence’s stories were written by a young man who lived just a few miles away, a lad who’d grown up surrounded by, and was writing about, people and landscapes practically identical to those I could see from my bedroom window.
Lee Stuart Evans

Another consideration is that each gag has to be tailored to the personality/character of the comedian delivering it. As Evans put it: “You can be the smartest, funniest writer in a room, but if the jokes don’t fit the persona of the performer you’re writing for, they’re worthless. A joke that might work fantastically for Jimmy Carr would probably not suit Sue Perkins and vice versa.”

Among the stars Evans has written for, one stands out as the reason he’s a writer: Frank Skinner. “I’d been in TV nearly 3 years when I got a job as a researcher/guest booker on [Frank Skinner’s] chat show,” said Evans. “I told him I wrote jokes in my spare time and sent them on spec to BBC radio shows like The News Huddlines. He asked if I’d like to sit in his office for a couple of hours after work, when he would write his topical monologue, and to chip in if I had any ideas. I’d always loved Frank’s stand-up, so it was a bit terrifying at first, especially as he’s so quick and sharp. Frank can think of a joke, say it aloud and have it written down before most people can read a headline. It was meant to be a week’s trial, but I must have done okay, or I make great tea, because Frank said I could do it again the following week, if I wanted to. It was a 10-week series, and I was in there five nights a week learning to write jokes with the funniest man on telly. I started to get more writing work after that, and I did four more series with Frank. I feel very lucky and very grateful to have had that.”

Evans was raised in Warsop on a council estate, at a time when the mining industry was being strangled, but he doesn’t think he’s a working-class writer. “I’m a writer from a working-class background, and proud to be so,” he said, “but I hadn’t consciously set out to write about working people, or to tell a story from a working-class perspective.”

London has been his home for the past 13 years but he tapped into his Notts upbringing for the writing of his first novel, a love-letter to the county. As a lad he’d spend weekends here with his beloved uncle John, either spotting trains or travelling on them. Like many a Notts writer, Evans didn’t respond well to authority and he left school at 16. After working as a car salesman, he returned to education at West Notts College. That led to university and a course in TV/Radio production.

It was between comedy writing jobs that Evans began to write about the places and people from the home town of his youth. I wondered if this writing had benefited from the perspective of distance. His said: “I’d moved quite far away mentally as much as physically since I worked in a garage in Notts, so when I came to write about Nottinghamshire and was starting to think about the sort of things I wanted to remember, research and perhaps use in the story, I felt as if I were seeing a lot of it for the first time, and I was pleasantly surprised at my reaction to it, and also how much I enjoyed seeing if I could put across on paper how I felt about the place in terms of making it a setting for a novel. I’m not sure I could have done that, or would even have wanted to try, from my old bedroom in Warsop.”

The inspiration for Alastair – the protagonist of Words Best Sung – came from a few photographs of Uncle John as a young man at Langwith Junction, and a comment made after his death at the age of 61. “My grandma said she felt the only time my uncle had ever been truly happy were the few years after he left school and had worked on the railway,” said Evans. “I just kept thinking about her words, and how at that age you can be so idealistic, so innocently optimistic.”

That age was the early 1960s, a great time to be young but a challenging one for steam engines. The excitement of the era is well-captured in Words Best Sung, a novel with a route to publication that took an interesting track. In seeking a publisher, Evans contacted Nottingham’s Alan Dance of Arundel Books. An author of Notts-set fiction himself, Dance was not accepting submissions but he was so impressed by Evans’ manuscript that he agreed to publish it.

Words Best Sung is a feel-good read about a group of friends transitioning between school and adulthood, in an age when youth culture came to life. It’s the 1960s and the colliery towns of north Notts are not immune from the musical revolution. A comic romance ensues as our naive lad is knocking about with his mates, making them laugh, and mixing with a couple of potential love interests. Alistair could go down an academic route but he loves the steam engines. It’s full steam ahead for our likable lead when the group take a trip to a holiday park in Skeggy, where one man’s misfortune presents a life-changing opportunity for the pals. London calls for the final act where conflict and a shocking revelation await. The fashion of the time tops up the nostalgia in a novel that will be loved by anyone with a fondness for the swinging sixties. The Notts dialect, with its insults and phrases, is spot on – as is the cockney – and there are plenty of laugh-out-loud lines.

The stories of the old steam engine days that inspired Words Best Sung also fired Evans’ own love of trains. And it was through reading railway books that he got into reading more generally, including the novels of D. H. Lawrence. Evans told me about his interest in Lawrence’s books: “I loved that Lawrence’s stories were written by a young man who lived just a few miles away, a lad who’d grown up surrounded by, and was writing about, people and landscapes practically identical to those I could see from my bedroom window. A lot of the time I couldn’t see what he was getting at, especially in some of his more mystical or lecturing moments when he gets all repetitive and bangs on and on about ‘godheads’ and men and women ‘yielding’ either too much, or not enough (there is a lot of yielding in Lawrence, almost as much as there is the knitting of brows).”

But Evans kept returning to Lawrence, drawn back by his sense of place, and the mixture of the rural and industrial, and the books gradually made more sense. He said: “I think as you get older you see different things in them, bad as well as good. I still struggle with the Plumed Serpent and the Australian novels, though, they seem hard work, but I’ll try them again. Whenever I re-read Lawrence it’s usually a Notts-linked story. I’ve always thought Sons and Lovers was my favourite, it’s the one I’ve read most, or The Rainbow, but I’ve recently read The First Lady Chatterley for the first time and enjoyed it so much – it’s more tender and largely obscenity-free. I’m starting John Thomas and Lady Jane to see how that sits between the first and the final versions*.”

There are comparisons between Lawrence and Evans that extend beyond their writing. “I like that sense of his writing always coming from an outsider,” said Evans, “whether a character is an outsider in his/her home or town, or, like Lawrence himself, an exile abroad, there always seems to be this constant fight to keep pushing on, of trying to find his true place, physically or sensually, which Lawrence himself did of course, in his writing and in life. I think as a working-class lad who had (and still has) ‘unrealistic’ aspirations, ideas above his station, I find his stubborn outsider position oddly reassuring, and, in a slightly depressing sort of way, very inspiring.”

He might now be a London boy but Lee Stuart Evans has written a proper Notts novel, producing the dialogue that only someone from these parts could muster. Evocative and entertaining, Words Best Sung is available from all good book shops.

* Lawrence wrote three versions of Lady Chatterley’s Lover, the novel known by this title is the third version, published in 1928. The first (The First Lady Chatterley) and second (John Thomas and Lady Jane) manuscripts contain similar plots but the characterisations vary and the dialogue widely differs in all three version.