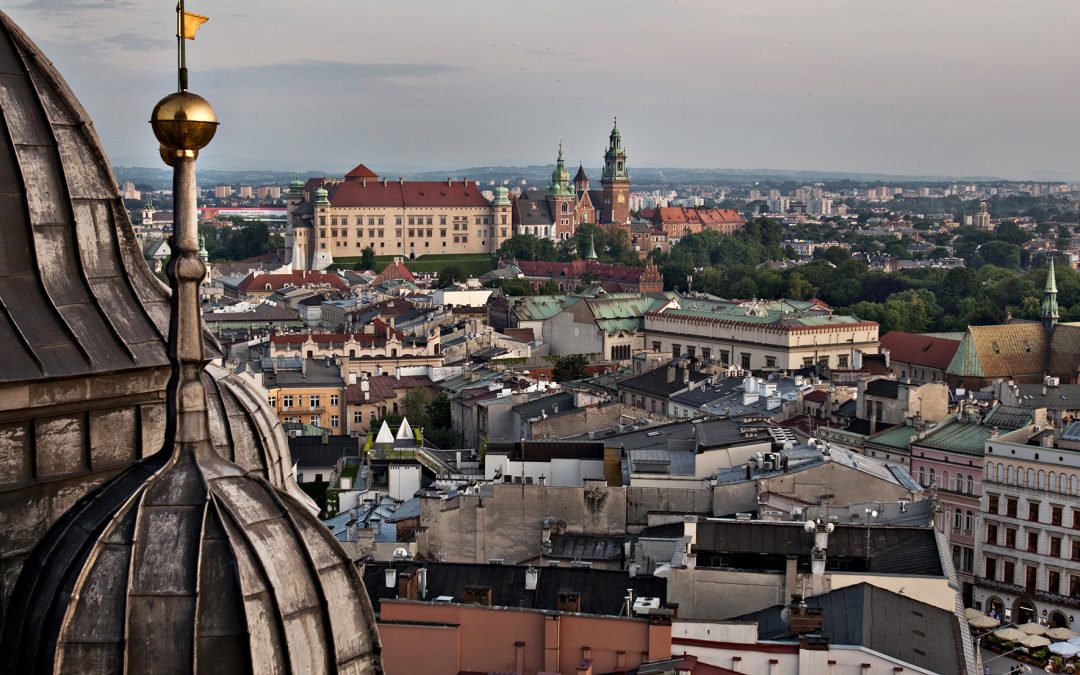 Gareth Morgan is a dramaturg based out of Nottingham Playhouse, and has just been confirmed as a Roosevelt Scholar which will see him travelling in the Southwest of the US looking at how primary-aged children learn English & develop a love of reading, with a particular interest to support children from disadvantaged backgrounds, or with English as a second language. Whilst on the trip, he’ll also be promoting Nottingham as a newly crowned UNESCO City of Literature and an ambitious county of literacy. As a taster to such globetrotting, he dropped in on a fellow UNESCO City of Literature.

Krakow – our sister City of Literature – has always been a place famous for its lure of stag dos, but Poland’s third largest city has much more to offer. With flights from East Mids, we thought it’d be a good idea to give you the low down on its literature credentials before you plan your next mini-break!

To start with the biggest attractions, there’s the city’s castle (or Wawel in Polish) and the central square with its bars and cloth hall market selling touristy wares. There’s the chance to catch the train to Wieliczka and visit the world famous salt mine cathedral or take a 2-hour bus to Oświęcim and pay your respects at the Nazi death camps of Auschwitz and Birkenau – now a memorial to the more than a million people, mostly Jews, who lost their lives there. Krakow city has fascinating sites connected with this period of history: the Oskar Schindler Factory (made famous in the novel by Thomas Keneally and the subsequent film by Steven Spielberg), the former Gestapo Headquarters on Pomorska Street and The Pharmacy Under The Eagle are all certainly worth a visit, which can all be done on a combined ticket – the Pharmacy being a real highlight.

The Planty Park, ringing in the Old Town of the city in greenery where once the medieval stone walls stood, is both a beautiful walk and an incredibly useful orientation tool – if you hit a green bit, you’re heading out of Old Town. Lining the paths of Planty park are QR-coded benches with the names of authors and literary figures associated with Krakow. I couldn’t click into any due to my lack of 4G internet but anyone visiting with better roaming data than me could have a brilliant few hours walking and referencing their way round!

Krakow is joy when it comes to bookshops and we visited 3. De Revolutionibus was a hip university books and coffee haunt with whitewashed walls, chrome fittings and plenty of sockets for charging your laptop. In Kazimierz, the former Jewish district of Krakow, was Lokator, stocking a mix of children’s books and colourful editions of classics and modern literature in Polish. They also had a great illustrations section, which I spent a good 45 minutes browsing. Kazimierz is also the place to grab a delicious zapekanka, a sort of Polish pizza bread, from the stalls on Plac Nowy – the perfect stop for a hungry bibliophile.

Finally, there was Masolit, which very quickly became our favourite. A stately town-house offering books in classically bohemian surroundings, it did everything that venues like this try to do and get it wrong effortlessly. The wood panelled walls and bottle green wallpaper, the floor to ceiling bookcases, the round wooden tables, Parisian bistro chairs and mismatches Art Deco lamps. If you visit Krakow, Masolit is a must. All three did excellent coffee and Masolit’s apple pie was also very good.

In De Revolutionibus we also met Ela from the Krakow Festivals Team, which included their City of Literature office. It was great to meet her and talk about Krakow’s journey as a City of Lit. She told us about their POETRY PROJECTIONS project, which we later searched out that evening. As a project, it feels spookily similar to Line of Light project on the tram bridge at the station.

The final stop on my literary trip in Krakow was the Basilica of St Peter and St Paul and home to the new Pantheon of Great Poles – a crypt reserved as the resting place of famous Polish writers, including one of my favourite playwrights, Sławomir Mrożek – and a collection of whose work I bought at Masolit. The basilica was a perfect way to round off a few days in a great city filled with literature!

The joint ticket for the Oskar Schindler Factory Pomorska Street and The Pharmacy Under The Eagle saves you a fair whack and is able to be used for 2 days.

You can pay for the trams onboard – so don’t worry about looking for a ticket machine like here in Notts, but don’t forget to validate your ticket!!