Capturing an authentic Nottingham voice is no mean feat, whether it be on the screen or on the page. Many actors have tried and failed to do the accent. Time and again, products of RADA try to sound like they were born within the sound of Little John’s bells, and instead end up flying up the M1 to Yorkshire, or hurtling Westward so that the deepest Brummie ensues.

Similarly, capturing the unique tones and structures of Nottinghamese would trip up a lesser writer, but not Kim Slater. What’s more, she doesn’t just get the Nottingham voice down with élan and accuracy; she takes on that most troublesome tongue, the teenage boy, and comes out winning. Her books for younger readers: Smart (2014); A Seven Letter Word (2016), and 928 Miles From Home (2017) all have working class, Nottingham, teenage boys as their protagonists. Their respective heroes, Kieran, Finlay, and Calum, are remarkably well-rounded characters, never slipping into cliché or condescension. Just as Dahl could inhabit a child’s world as if he was still very much there, Slater writes immersively from their viewpoint: a remarkable thing for an adult woman to be able to do.

Her readers agree too; her books sell, and sell well. Smart was nominated for 25 awards, bagging 10, including the prestigious Geoffrey Treece East Midlands Book Award. It’s been heralded as a ‘Future Classic’ by the Book Trust, and scooped awards in Italy as well as in the UK. “A remarkable first novel,’ was The Guardian’s verdict, and they’re not wrong.

Slater puts a lot of her success down to the Nottingham Trent University course she joined relatively late in life.

“I was always a writer,” she explains, “but never made it past a rejection letter. I decided to get professional, and treat this like I would any job: train hard, get to understand what works and what doesn’t, then get to it. So when I reached 40, and my daughter was more grown up, I took the step, and went for it.’

Writing her young adult books, and the subsequent tours of schools and literary events, might seem enough work for anyone, but, like J.K. Rowling’s Robert Galbraith, the aforementioned Dahl’s supernatural stories, or T.S. Eliot’s feline frivolity,  Slater leads another life. Fans of crime novels will be familiar with K.L. Slater, whose psychologically intense (“I think ‘domestic noir’ works well as a description”) eBooks are immensely popular, and suit her strong work ethic. 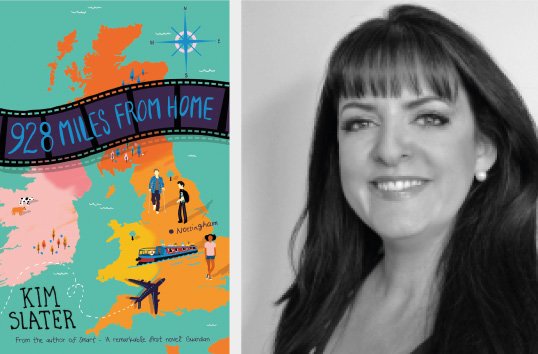 I write professionally, and that means being professional about it. You have to carve out the time, and stick to it. But I love writing, so it never feels like a chore. I’m not someone who wants to fret over deadlines, I like to get the work done.

This will come as great news to her many, many fans, who eagerly await each book. No Donna Tartt hiatus for them; Slater doesn’t strike you as the type of person to be held up by writer’s block.

“It’s more the case of too many of ideas, and narrowing them down.”

Is there a conflict between the two types of books she writes?

“No . . . quite the opposite. Although they are different, I see them as two balanced hemispheres. They complete me, I suppose. I don’t think my teenage readers would recognise my crime work, similarly with my crime readers. But they make up me, fulfil me. I’m really happy right now, very content to have my books read by different audiences.”

Despite a mantelpiece that probably soon needs reinforcing with girders against the weight of prizes sitting atop it, you get the distinct feeling that Slater’s career is still full of surprises. It’s the holy grail of reading advocates to get teenage boys to read, there have been many try and many fail. Slater’s expertise in characterisation cuts through, though, and her books engage an audience that all too easily give up on reading. This drop off in literacy plays a major factor in the life chances of an individual, and keeping this tricky cohort engrossed when so many other attractions and difficulties appear en masse is daunting. Slater’s books therefore make a huge difference, and we’re immensely lucky to have her as one of our own.