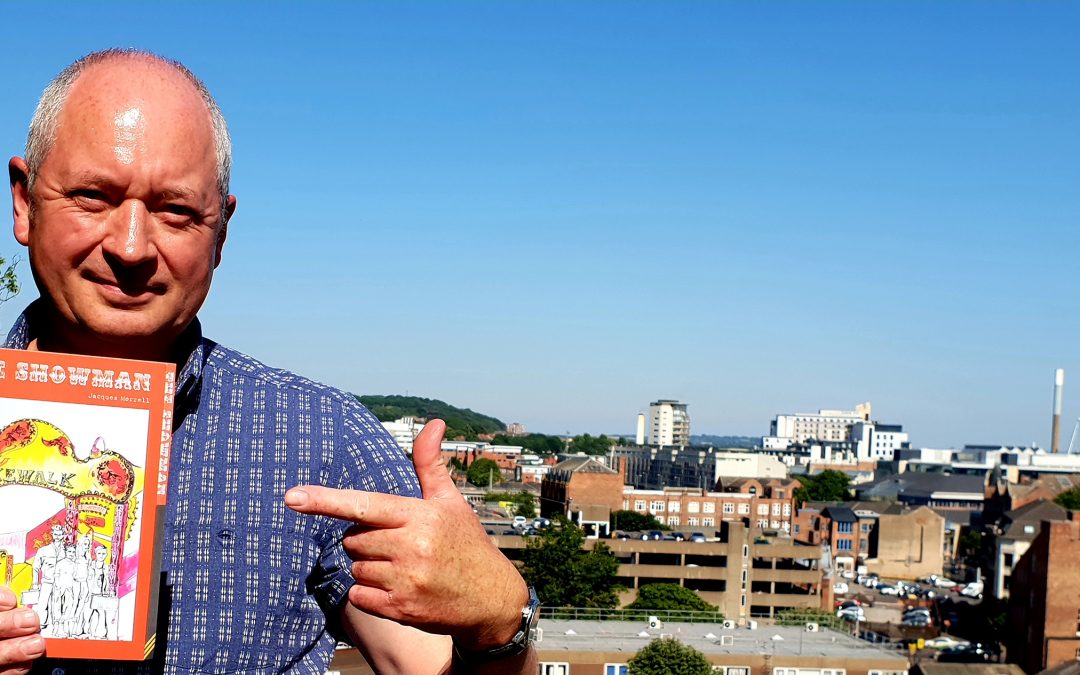 Our intrepid Young City of Literature Ambassadors have spent the last couple of weeks interviewing some of Nottingham’s best writers, novelists and poets, exclusively for the City of Literature website! In our first of these interviews, Oakwood Academy student Giorgia Della Rocca, talks to the king of police procedurals, Jacque Morrell. Jacques Morrell is a retired Nottingham detective, and his first novel, ‘The Showman’, is a suspense thriller set (predominantly) in Nottingham during two weeks in 1978.

What did you do before you became an author?

I think it is fair to say that I have always been a ‘Jack of all trades and master of none’. I personally think this is a complimentary term and not a slight on who I am. I like to have a go at anything. I have a sense of adventure and an element of risk taking to a point. I suppose that my tendency to move on to something new may mean I have never mastered any particular thing. I am comfortable with that. It is not that I get bored easily, I think it is more that I do not want to be stereotyped and pigeon-holed. I enjoy meeting people and connecting with them.

Employment wise, I have done a variety of things. I left full time education at the age of 17. I did office work, bar work, market trading. Between the age of 22 and 52, I was a police officer and detective. This was obviously a big chunk of my life.

What is your favourite genre of books to read and why?

Good question. I suppose contemporary mysteries and suspense thrillers. I read a lot as a child (John Wyndham/Ian Fleming). At school I started writing short adventure stories. I don’t usually go for historical or period stuff, although I did have a spell reading Louis Lamour novels on the American Wild-West. During my police career I did not read much apart from a few autobiographies.

Have you always been a fan of suspense thrillers and is that why you choose to write in this genre?

I guess that I prefer suspense thrillers to crime, but I can honestly say that I have no idea why I chose to take story of The Showman to where it went. It probably started as a crime fiction but my ideas just seemed to move to the unexplained and supernatural. When I spoke to people about my plan to write a novel, I was told to write a crime novel. I was told to write about what I know. I think I rebelled against this in a way. I enjoyed the freedom to write about whatever I wanted. I had spent the last thirty years writing police prosecution files, and I wanted to escape from that.

To date I have completed and published just the one novel. I think that ‘first novel’ is all about getting something ‘off your chest’. It is a learning process as much as a creative process. I have a few other projects that I am working on. I feel better prepared now.

What is the hardest part of your writing process?

Putting the time in for sure. Whilst I enjoy my own company, I also need to meet people and go to places. Writing a novel is such a big project, and it needs a discipline to write for hours and hours on end. I have discovered that it is useful to play around with ideas. Maybe start with a short story or a poem. That could then develop into something more ambitious. I have even written a 30 minute script as a pilot episode for a new situation comedy.

I tend to write in the mornings. I can start early if necessary. I like to make plans and go out in the afternoon and evening. I like the idea of going off for weeks and writing in a remote location with no distractions. Could I do it though? I’m not so sure.

Do you use a lot of your past from fighting crime in your books?

I suppose so yes. Fictional characters will certainly be influenced by real experiences of real people.

That will apply to any writing I suppose. I usually try to incorporate some authenticity when I write about policing. That said, a good imagination is better than a poor memory.

Are you working on any new stories at the moment?

I have quite a few projects on the go. I have two novels under construction, although one may get shelved. The situation comedy script is almost there, and I have written about 20k words of my policing memoirs. I have also been writing a series of script briefs for a true crime podcast. This has slowed down my other work. I suppose the good thing is that I am writing.

What do you do when you’re not writing?

If we take away the current restrictions around the Coronavirus, I would be back to socialising with a wide section of society. I enjoy live sport, theatre and music. I am also involved in a heritage project and a community project. My newest project is the podcast. It is interesting, because it involves three of us, a producer, presenter and the crime expert. The first episode was recorded on location in a remote village. The next episodes will be recorded individually from our homes. It is not the same. I go back to my point about meeting people face-to-face. I need that 3-Dimensional interaction. Maybe that’s why I enjoyed my police career so much. I met so many people in so many situations.