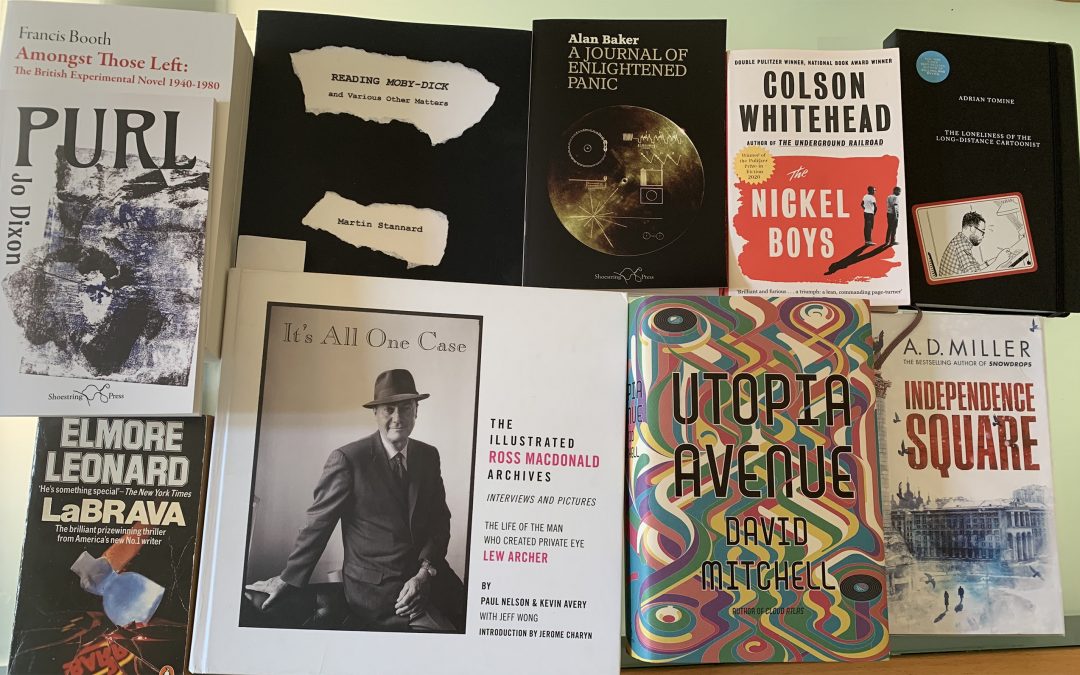 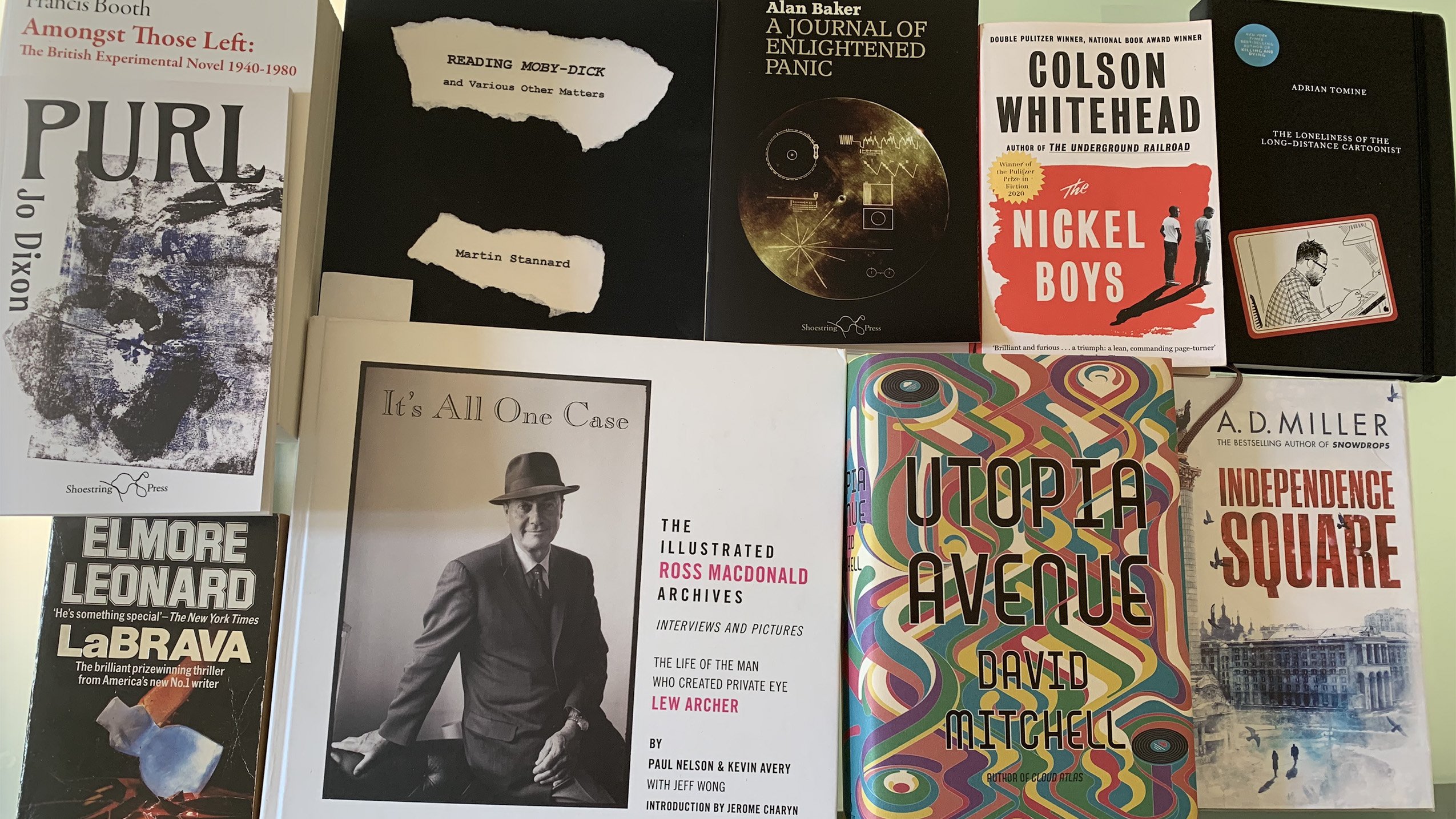 For me, as for many people, it’s been a summer of reading. I’ve not had the brain space or inclination for creative writing and preparations for next term’s online teaching have taken a toll. For the last eleven days, Sue and I were meant to be travelling around Norway by train. Instead, we’ve visited my dad in Colne, shortly before Pendle was locked down again and made a fleeting visit to Sue’s family in Stevenage. The only thing our holiday has had in common with the one we should have had is that a lot of reading has been done. Since my lockdown blog, I have finished Hilary Mantel’s Booker winning (spoiler alert) The Mirror and the Light, which is decidedly longer than its two predecessors but more digestible when split into three books, (200, 300 and 400 pages long), taking breaks in between.

I’ve been dipping into a well researched and well balanced history of the experimental novel, Francis Booth’s Amongst Those Left (title taken from an unwritten BS Johnson trilogy), while dipping into recent JH Prynnes and Tracy K Smith’s selected, but I’ve not had much time for poetry, apart from the excellent new Leafe Press collection by Martin Stannard, Reading Moby-Dick. He’s an old friend, so I won’t go on about its many qualities, but this is a wide ranging collection that showcase just about every side of Martin’s highly distinctive work, from prose poem to long sequences to daft jokes. It’s an absolute joy. All credit to Leafe for such a handsome book (and do check out Pippa Hennessey’s YouTube interview with Martin, available from 7pm on Tuesday 18th, when Martin will be on hand to answer questions, on the Five Leaves YouTube channel.

Continued my Ross MacDonald reading project, but have paused the novels to work through the short stories and It’s All One Case, an excellent coffee table type book featuring nearly fifty hours of interviews with the author by the late Paul Nelson. It’s outstanding on the craft and history of crime writing and, if you think – as I increasingly do – that MacDonald was the best crime writer of the last century, you’ll be in heaven.

For a long time, I used to say that Elmore Leonard was my language’s best living crime writer. I started reading him in 1985, which was also the year that I began writing seriously (by which I mean, most days, for hours at a time). I’m rereading the first one I read, which was published in paperback that year, LaBrava (photographer falls for ageing film star who has become embroiled with low lifes), and it takes me right back. What style! What humour! The plot barely matters, but the novel, which is a loving homage to American Noir cinema of the 40s & 50s, holds up really well. I was lucky that, back then, I knew John Harvey. He lent me Leonard’s earlier crime novels. Recently, another friend, Graham Caveney, gave me copies of some of those early novels and I look forward to rereading them, too.

Who’s now my favourite living crime writer? I hear you ask, now Leonard’s long gone. In English, I would say, Lawrence Block, still going strong at 82. He just published one of his best (but nastiest) novels, a compelling noir narrated by a serial killer: Dead Girl Blues. (I have an e-edition so no image above). It’s not something you often say of writers in their 80s, but I hope there are more to come.

Delighted that Bromley House Library has reopened. I’ve visited twice already and met friends in their garden. They have a big range of new novels on display. I borrowed screenwriter Charlie Kaufman’s Antkind, but it didn’t pass my fifty page test (to be honest, I started skimming after ten pages, which is rare for me, but I found it annoying). They also had a book I’d ordered before lockdown, AD Miller’s Independence Square. It’s a gripping, complex account of the fall of a near ambassador in the Ukraine, with a political reporter’s understanding of the complexities and corruption involved. Right up there with his Booker Prize shortlisted Snowdrops.

I’ve also been buying books from Nottingham’s Five Leaves Bookshop. I wrote at length about Graham Thompson’s excellent John Martyn biography already. The next book I got from them was David Mitchell’s Utopia Avenue. I’m a big Mitchell fan, and have read everything he’s done. But, in opening this one, I was also aware that there has yet to be a single satisfactory novel about rock music, never mind a good one. So, OK, Utopia Avenue is a romp, and best enjoyed as such. Characters from Mitchell’s other novels (eg Luisa Rey from Cloud Atlas, Marinus from The Bone Clocks and, in particular, The 10,000 Autumns of Jacob de Zoet) reappear, rewarding the faithful with their consistency. Less consistent is the portrayal of famous musicians, which is often done with a name-dropping disregard for accuracy. At a party, Syd Barrett sings a song that he only played once, in private. Musicians I’ve met and spoken with, such as John Martyn and Leonard Cohen, sound nothing like themselves. Indeed, when I read ‘Lenny’’s dialogue, I assumed it was meant to be Lenny Bruce – though wasn’t he dead by then? But Mitchell mostly gets basic timeline details right so it feels churlish to complain about cartoonish versions of real people. That said, I hated the bit where Janis Joplin directly quotes from a song about her that Cohen wrote after her death. I was irritated when Brian Eno is referenced as a friend of Mitchell’s fictional band three years before he even moved to London, never mind came up with the concept of ‘scenius’ (sorry, muso trivia, but my Twitter biog does out me as a ‘music nerd’).

Musical enthusiasts will spot lyrical anachronisms, Mitchell notes in an afterword, as though his conceding the point in advance makes his playing fast and loose acceptable. This is a novel with some serious content and some great writing, but it isn’t a novel to be taken seriously and will undoubtedly lower Mitchell’s literary reputation, should he care about that. I thought he was better than this. But, hey, he’s written a romp for boomers and it’s selling like hot cakes. My pre-publication copy is a fourth edition, which tells you something about its popularity. And Mitchell fans with no interest in music will still need to read it for the sections about the madness of Jasper De Zoet, which ties up storylines from The Ten Thousand Autumns of…and The Bone Clocks, and are also the best bits of the book. On the whole, I’m with the New Yorker: https://www.newyorker.com/magazine/2020/07/06/what-happens-when-david-mitchell-writes-a-rock-novel?

My final purchase from Five Leaves was the first I was able to make in person (after sanitising my hands and congratulating Simon on his recent marriage). It was also the best book I read during my holiday. I loved Colson Whitehead’s The Underground Railroad but The Nickel Boys is even better. Shorter, tighter, it feels like an American classic that’s bound to be studied for generations. The novel’s set in The Nickel, a segregated reform school in 1960s Florida, to which the idealistic Elwood is sent after being wrongly accused of stealing a car. It’s utterly absorbing, occasionally heartbreaking and superbly constructed. This review sums up its qualities well, should you have already read it. If you haven’t, I urge you too. It’s in paperback.

To return to my opening spoiler (if you’ll forgive me a conspiracy theory) the only reason that The Nickel Boys can have been left off the Booker shortlist is that they’ve decided to give it to Mantel and, rather than insult people like Whitehead (whose book, to my mind, would be a worthier winner) they’ve filled out the longlist with newcomers, mostly American citizens, who’ll be grateful for the leg up (and Anne Tyler, who’s used to being a bridesmaid). I hope to be proved wrong. My final day’s holiday reading is a causticly autobiographical graphic novel by Adrian Tomine, purchased from Page 45 and two new collections from Shoestring Press: rich, very enjoyable work by Alan Baker and Jo Dixon. All are pictured above. Please support local authors, publishers and bookshops. Lastly, thanks to Five Leaves Bookshops for hosting our series of online author interviews and discussions, which I’ve enjoyed enormously. All of them are now hosted on their YouTube channel.