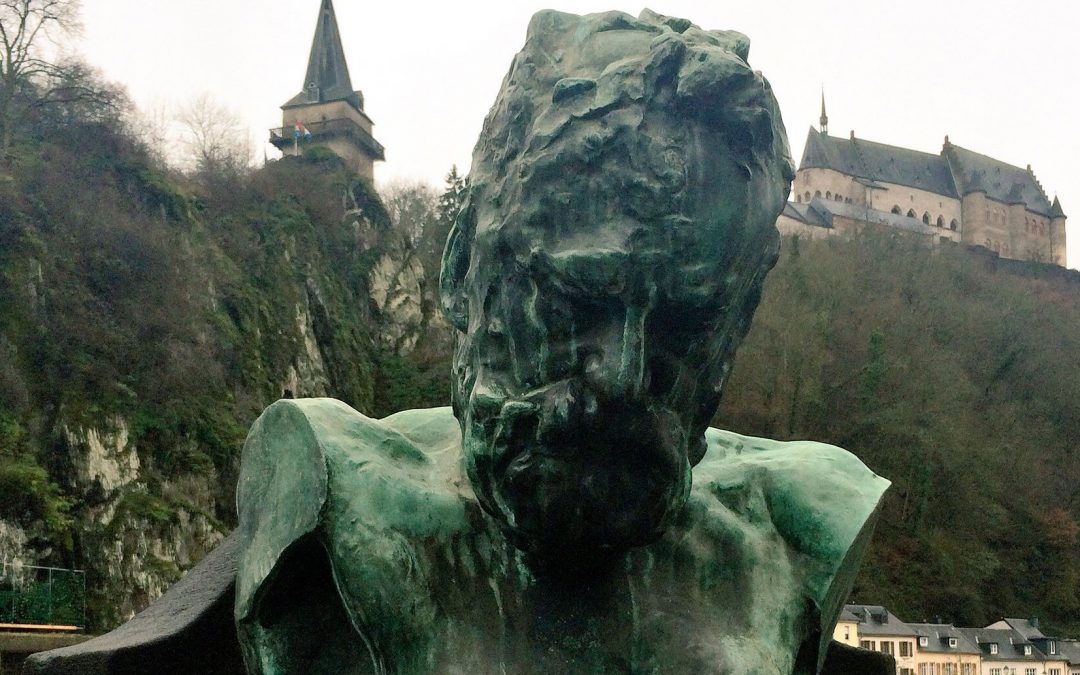 All of my holidays involve literary pilgrimages. I’ve visited Riga to see a new library being built, followed the James Joyce trail through Trieste and then into Ljubljana when it was made World Book Capital. Recently my attention has been firmly on DH Lawrence as I research for my ‘memory theatre’ project and in my capacity as archivist for the DH Lawrence Society. This has meant I’ve been spending a lot of time in Lawrence’s childhood home Breach House (28 Garden Road, Eastwood) and thinking about how this space is used. It was with this in mind that I headed over to Vianden, Luxembourg at the beginning of December to visit Victor Hugo’s former home (37 Rue de la Gare).

Victor Hugo was a political exile who fled France in protest at Louis-Napoléon Bonaparte, the Emperor of the French from 1852 to 1870. His 19 years of exile took him across Europe, with Vianden becoming a regular stop off point between 1862 and 1871. Although he didn’t write any novels while here he wrote around 50 poems. But his diaries and letters are what intrigued me the most as they offer important insights into his personality. For example, on 14 July 1871, a fire broke out, setting ablaze the thatched roofs of ten downtown houses. With the Mayor away on business, Hugo took control, organising a line of buckets to pass water through the night.

Hugo was a keen artist and 60 of his 3,500 wash drawings reference Luxembourg. One of these, The Fantastic Castle (1847), is of a medieval castle and includes a body hanging from a pole. Hugo was highly critical of capital punishment, largely because he had seen so many French Communards executed during the civil war for their beliefs, and so this tiny dangling body juxtaposed against the towering walls of the castle captures the powerlessness of ordinary citizens in the face of brute force.

The Victor Hugo House is on a bridge and runs over two floors. Hugo lived here for two and a half months in 1871, his longest stay in Vianden. He rented one room on the first floor, with three windows overlooking the Our river and the imposing 10th century castle Ville et Château, which is now a UNESCO World Heritage Centre. In 2002 a wall was removed to enlarge the room and it now replicates the original room, with a sculpture of Hugo (by Herbert Labusga) sat down writing at a desk. Framing this are various letters as well as a 15 minute audiovisual show (in French) in which professional actors and musicians recreate aspects of his life.

The museum was first conceived of on 30 June 1935 when a Victor Hugo committee was formed. The inaugural speeches didn’t touch on Hugo’s political views given the rise of extremist movements at the time. But this changed a fortnight later when 2000 young people, gathered by the students’ association ASSOSS, demonstrated against the pervasive forces of Nazism and Fascism. Extracts from Hugo’s Chatiments/Punishments (1853) were read out, warning against the dangers of totalitarian socio-political regimes. This struck a chord with the gathered masses, earning Hugo the title of ‘keeper of the Grail of human rights’. The main speaker, Frantz Clement, would later be assassinated at the concentration camp of Dachau.

During the war the house remained open, operating as a library with nationalist books. The bust of Hugo which had been placed on the bridge in 1935 was removed to be kept safe from looters. It was found in a hearse after the war. When the Nazi’s left Vianden on 12 September 1944 they blew up the bridge. The house was so badly damaged it had to be flattened. It was reconstructed to the exact dimensions and opened on 1 August 1948.

I knew barely anything about Victor Hugo before I visited the museum, and so is yet another reminder of the importance of preserving literary heritage. Audio guides are available which will keep you occupied for a good two to three hours. In the attic are banners with quotations hanging from wood beams, a library containing various editions of his work, and interactive terminals with access to over 500 documents, biographies and a series of literary games to help younger audiences better understand his legacy. One of these is a puzzle game whereby you piece together jumbled up elements of some of his paintings. It’s a clever touch, educating through play.

Vianden is also home to the Caricature and Cartoon Museum (48 Grand-Rue) but is only open between June and August. The Ancien Cinema Cafe-Club (23 Grand-Rue) is also worth a visit. In addition to an eclectic mix of furniture and a range of drinks and sandwiches, it shows silent films in the day, making it a great spot to do some writing. A return to Vianden (50mins on train, 15 mins on bus) is 6 Euros.

James Walker specialises in digital literary heritage projects. His recent commissions include The Sillitoe Trail and Dawn of the Unread. He is currently working on Whatever People Say I Am (2018) and DH Lawrence Memory Theatre: A Digital Pilgrimage (2019)