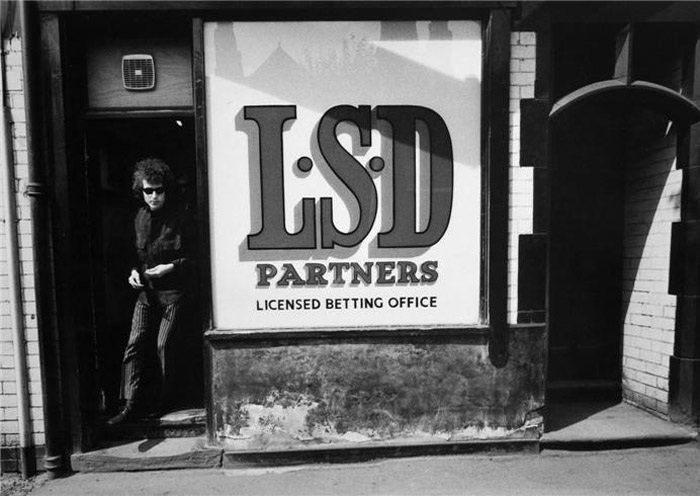 It’s May 16th 1966 and a black Daimler limousine pulls up outside the gates to Nottingham Castle. Men get out. One is holding a photographic camera; another has a cine camera and microphone. They are both focused on a third man. He is sporting a curly mop of hair, dark sunglasses and pinstriped trousers. He is Bob Dylan.

At this time Dylan was a top 40 pop star, his latest album ‘Highway 61’, a new electric sound that’s causing a stir. As he arrived in Nottingham, Dylan was in the middle of a concert tour that changed music history. Later in the day he told Jean-Marc Pascal “I wonder why so many people claim to like me when they don’t understand anything of what I’m doing.”

Each show of the tour saw Dylan perform the first half alone, acoustically. Then he strapped on his black Telecaster and emerged from the interval a different man, his band in tow. If Dylan looked bored in the first half, he looked pumped up for the second, ready for action. Most nights, the second half is met with heckling, cries like “Off, Off” and “Traitor”, with slow handclapping between the loud electric songs. The naysayers were a minority but their presence was felt and the scandal-chasing media were happy to whip up the controversy.

It was between two of these shows that Dylan called in on Nottingham, on way from Leicester to Sheffield. He had his photo taken coming back through the gates. The photographer was Barry Feinstein husband of Mary Travers (from Peter, Paul and Mary): he’s providing a visual record of Dylan’s tour. Back in the limo Dylan waved to locals out the back window as they drove off. Another couple of photo’s were taken close by, outside L.S.D partners, a bookies at 18 Castle Boulevard, now Luxury Lets.

The evening of the day Dylan came to town he played Sheffield’s Gaumont Theatre where he sang ‘Desolation Row’, a song with the lyric “Einstein, disguised as Robin Hood”, perhaps with our Robin Hood statue in mind. The Sheffield show was to be a highlight of the tour.

One day later Dylan played Manchester’s Free Trade Hall, a legendary night mistakenly known as the “Royal Albert Hall” concert. It captured a moment in history, when “Judas” was shouted from the balcony. Dylan can be heard responding to further heckling with, “I don’t believe you…you’re a liar” and then he turns to his band and says, “Play it f*ckin’ loud”, before ‘Like a Rolling Stone’ blasts out.

That show is the most bootlegged concert in rock history, only officially being sanctioned for release in 1998. As with other shows on the tour, the dissenting voices made the papers. Dylan’s relationship with the press was difficult. He objected to being labelled, with an Arthur Seaton-like defiance, saying he’s not a protest singer nor a poet, and he doesn’t play folk-rock. Many of the reporters hadn’t heard him sing. Dismissive of their inane, irrelevant questions, Dylan would amuse himself with creative answers. Take this exchange with the established press:

What do You own? Oh, thirty Cadillacs, three yachts, an airport at San Diego, a railroad station in Miami. I was planning to bus all the Mormons.

What are your medical problems? Well, there’s glass in the back of my head. I’m a very sick person. I can’t see too well on Tuesdays. These dark glasses are prescribed. I’m not trying to be a beatnik. I have very mercury-esque eyes. And another thing – my toenails don’t fit.

Tell us about the book you’ve just completed. It’s about spiders, called ‘Tarantula’. It’s an insect book. Took about a week to write, off and on…my next book is a collection of epitaphs.

It would be another 39 years before Dylan actually performed in Nottingham. On the setlist was ‘Masters of War’, a song with a Nottingham connection. ‘Masters of War’ is set to the tune of ‘Fair Nottamun Town’, a folk song the Ritchie family believed was “sure to be about Nottingham in Old England.” Jean Ritchie gained the copyright to ‘Fair Nottamun Town’ in 1964. The Ritchies of Kentucky hailed from all over the UK, first arriving in America in 1768, and bringing their songs with them. Aiming to keep their heritage alive they sang their songs through the ages. ‘Nottamun Town’ was an old ‘magic song’ (it’s said that the song is cursed, and that whoever uncovers its meaning will lose all of their luck) from early Nottingham Mummrs’ Plays. These folk plays were performed by amateur actors, traditionally all male, and featured several different stock characters including Tom Fool and Dame Jane. The plays were taken door to door and performed in exchange for money or gifts, with threats of destruction if the audience didn’t pay up. They were like an adult version of today’s trick or treat, the actors hiding their true identities.

In Nottamun Town, not a soul would look up

Not a soul would look up

Not a soul would look down

Not a soul would look up

Not a soul would look down

To show me the way to fair Nottamun Town

Back in Greenwich Village of 1963, Jean Ritchie watched a ‘young, scruffy, nervous, unprepared and mumbling’ Bob Dylan up on stage. He performed his ‘new song’ ‘Masters of War’ and Jean recognised the traditional ballad. If you listen to Dylan’s ‘Masters of War’ you too will hear the similarity of melody. Owning the copyright, Ritchie has earned healthy royalties from Dylan’s ‘Masters of War’, money that has made its way to Kentucky charities.

Dylan would have come across the ‘Nottamum Town’ tune from Jackie Washington, who had sung a version of the song (in 1962) which Dylan loved. Dylan would go to Gerde’s Folk City every night Washington performed and repeatedly ask him to sing it, later demanding a copy of the record. The next time Washington heard the tune it had become ‘Masters of War’. Dylan said of the song’s lyrics: “I’ve never written anything like (Masters of War) before. I don’t sing songs which hope people will die, but I couldn’t help it with this one. The song is a sort of striking out… a feeling of what can you do?”

When Dylan played ‘Masters of War’ in Nottingham (2005) it was the only time he played the song during that UK/Ireland eleven-show leg of the tour. His last Nottingham concert was in 2017. There was no place for ‘Masters of War’ but ‘Desolation Row’ was played (sadly, minus the Robin Hood lyric).

Arguably the greatest lyricist of all time, Bob Dylan won the 2016 Nobel Prize in literature.

Another footnote: ‘Blonde on Blonde’, rated by critics as one of the greatest albums of all time, was scheduled to be released on May 16th 1966, the day Dylan came to Nottingham, but it was held back to allow for further mixing.