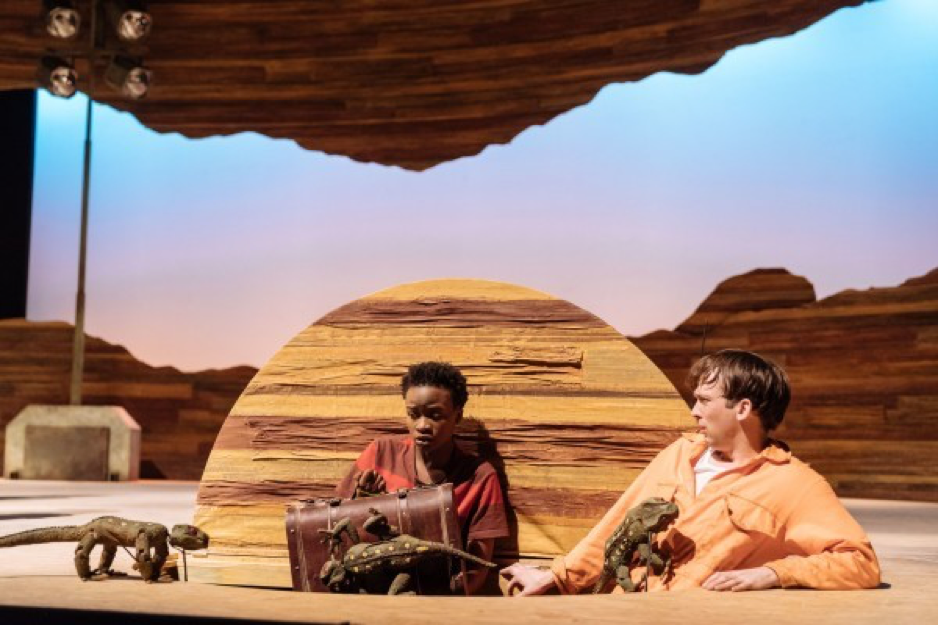 My first introduction to the Louis Sachar’s Holes was in the mid-2000s at high school in a Greater Manchester town. At first, any school curriculum- appointed book seemed like a Camp Green Lake punishment, but Holes felt different. Perhaps it was the Disney adaptation shown to a class of Year 9 pupils in hopes of enticing them to study the novel. Perhaps it was because it was one of the first novels I studied that addressed racism and injustice, an adult topic brought to the forefront of my adolescent mind. Nevertheless, reading the Texan desert scenes transported high school me to the barren wasteland – my lips became dry at the words and the feeling of my tongue stuck to the roof of my mouth would have me reaching for the water bottle on my desk.

Holes tells the story of teenager Stanley Yelnats who is sent to a camp in Texas for stealing a famous baseball player’s sneakers. Except he didn’t and the injustice is attributed to a family curse, more specifically Stanley’s “no-good-dirty-rotten pig-stealing-great-great-grandfather”. While Stanley is forced to dig five-foot-deep, five-foot-wide holes under the supervision of a nasty Warden and her team, flashbacks of his family’s origin story and that of Kissin’ Kate Barlow unfold the mystery curse surrounding the Yelnats. The circular conclusion of the novel is one that makes the reader want to shout “good for you” to Stanley and his camp buddy Zero in the final pages of the novel.

Adam Penford’s direction follows his storming success of bringing local playwright Beth Steel’s Wonderland to the Nottingham Playhouse stage. Penford, who was appointed the Playhouse’s Artistic Director last year, told LeftLion that Holes’ was his challenge at bringing family audiences into the theatre during the panto off-season. The opening of desert animal puppetry and a comical tumbleweed brought to life by the cast members has that in mind, as well as the  shower scene in which, jarringly, Bruno Mars’ ‘Finesse’ blares over the speakers. Chris Ashby plays Stanley Yelnats in a doleful, naïve manner and Pepter Lunkuse’s bored gazes over the audience captures Hero’s silent disdain before she (Lunkuse) comes in to her own in the second half of the play.

Simon Kenny’s set design gives the stage adaptation the fluidity needed to flit between the flashbacks and current narrative seen in the novel. He also solves the problem of depicting the dug holes by using round wooden crates filled with sand which lends the realism of the American desert to a Nottingham stage on a Thursday evening. The second half of the production is where the story shines the brightest as it’s where the story’s themes of racism and justice gain tremendous momentum in a colourful set design and era-approved costumes. John Elkington swaps his panto Dame outfit for a cowboy hat and bag of sunflower seeds in his turn as Mr. Sir, and the lecherous sheriff while Kacey Ainsworth excels as the mean, vengeful Warden of Camp Green Lake.

Penford has proved Holes deserves a place in UK theatre. The nostalgia is full to the brim in this adaptation and I left the theatre with the same dry feeling in my mouth I experienced over ten years ago in the classroom. That’s not a bad thing.