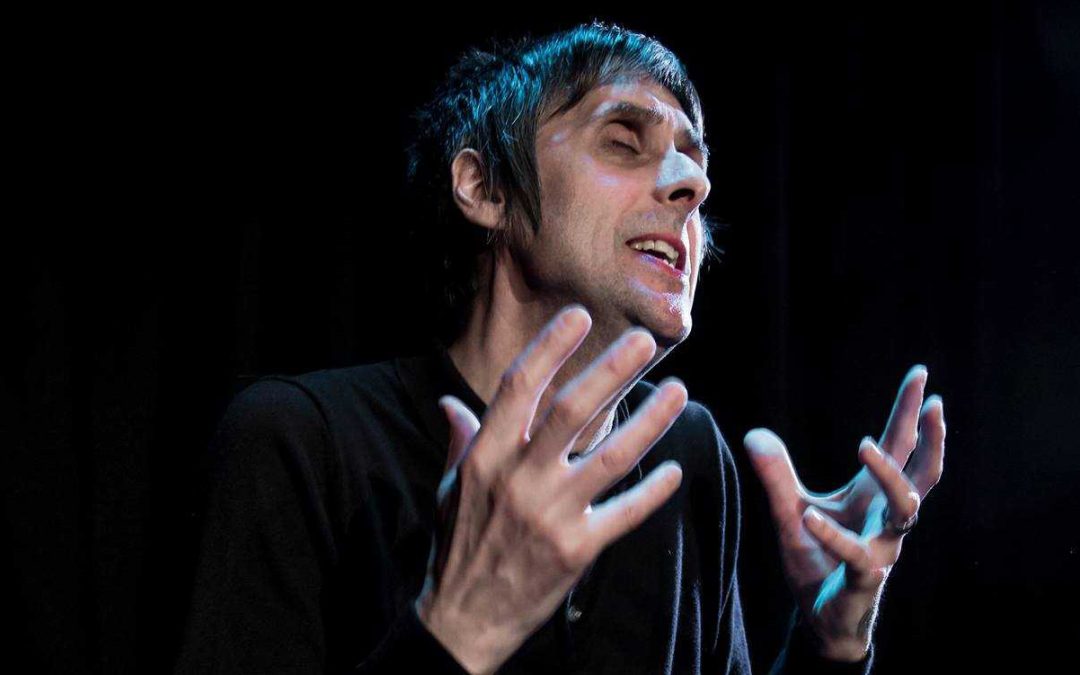 Performance poetry seems to have crept up on us and become the coolest thing in live theatre. Why? I don’t know. Maybe some of us regard our purpose built theatres as a bit pretentious. Maybe the current music scene is a bit bland and less innovative. Maybe it is something as simple as the fact that nowadays we tend to socialise in smaller pubs and bars that are more intimate. Often located in converted shops, these bars usually have a cluster of second-hand dining room chairs, randomly placed around the room, like memories of family parties at relatives’ houses. The kind of gatherings that insist on everyone sharing the experience, with nowhere to hide. A perfect place for words to flourish.

One of the finest examples of this wave of performance poetry is Andrew Graves, aka Mullet Proof Poet, a formidable talent and finely tailored phrase-turner.

How’re things with you at the moment?

Political ramifications and upheavals aside, I’m good, ta. Workwise, I’ve just finished two writing residencies; one at QEA Academy in Mansfield and another at Nottingham Contemporary. Now I’m on bit of a mini tour to promote the new book, planning a 2018 national tour of God Save the Teen, and slowly putting together a new poetry collection. On top of all this I’ve just started work on a project with poet Leanne Moden and Writing East Midlands, which is all about encouraging a group of asylum seekers, refugees and young people to write and share their experiences.

Much has been made of your live performances as a poet. When I saw you for the first time at the launch of God Save the Teen, your ability as a public speaker was clear. Your skill at timing and phrasing meant it was not always apparent when you were moving between your poems and addressing the audience. How important is it for you to address an audience in person?

It’s important to me. It gives me focus. […] I never ‘write for the stage’; everything I write has to work on the page first. I like being able to turn new poems and older poems into performance pieces. And I’m glad that it’s not always apparent where the anecdote ends and the poem begins – that’s very intentional. I personally don’t like having to stop between each poem to announce another one. Some poets do this kind of thing very well but some don’t. A lot of poets don’t seem to think about what they’re going to say between poems or how they are going to present themselves, and to me that seems a bit rude and a little lazy. I spend almost as long working out the patter and anecdotes between poems as I do on the poems themselves. That said, I do think it’s good to leave room for a bit of ad-libbing on the night. Essentially when you perform your work ‘live’ there’s an instant reaction. That suits me. I’m a very impatient person.

At the launch of God Save the Teen you mentioned Elvis Costello as an influential lyricist. In previous interviews, you have stated that Jim Bob from Carter USM and Paul Weller have fascinated you. What is the most influential novelist you have read?

Ray Bradbury. His work is so rich, his prose style so perfect. Everything he wrote had such resonance, an organic kind of beauty, and whilst it’s stunningly good it also carries with it a heavy-hearted humility and a sense of awkward wide-eyed wonder. That’s really important. And his writing is so poetic. There’s a story he wrote called ‘Kaleidoscope’, which starts with the lines:

The first concussion cut the rocket up the side with a giant can-opener. The men were thrown into space like a dozen wriggling silverfish. They were scattered into a dark sea; and the ship, in a million pieces, went on, a meteor swarm seeking a lost sun.

I mean that’s a poem in itself, isn’t it? And if you look at one of his most famous novels, Something Wicked This Way Comes, the whole thing reads like a surreal, long-form poem. It’s got this musical and dizzying, ethereal quality, dreamlike and scary – a bit like a half-remembered, 1970s public information film about trying to prevent kids drowning in the canal. He was a magician, a slightly crumpled, storytelling genius. There was and still is no one else to match him.

Did you read books as a child? Who helped to develop this interest?

I didn’t really read novels as a young child, aside from a few things like The Hobbit and a couple of books by Roald Dahl. I was more into comics – classic British stuff like The Beano and The Dandy but mainly the American DC superhero stuff: Batman, Green Lantern, Superman, all that. (I’ve still got most of them in the attic). This was before comics were as accepted as they are now. There were no specialised comic shops, so I had to satisfy myself with whatever the local newsagent had in. There was no consistency but I loved them anyway. The other things I was obsessed with were non-fiction books about horror films. I had a copy of Movie Treasury Horror Movies by Alan Frank, that I nicked from my brother. I was fascinated by it. Now with the internet, you can access anything in seconds but back then the only access I had to some of those films were the pictures in that book. It took me years to finally get to see a lot of those movies. I loved it though. That was the good thing about being a kid in the 70s. Not everything could be accessed straight away. It left you space to imagine. It built your expectations and though some of what you imagined turned into a massive disappointment, the wait was usually worth it. It was an odd period to grow up in. A lot of kids’ TV shows back then were terrifying even if they weren’t intending to be. The opening sequence to Bagpuss still gives me the willies. But I read that horror film book so many times that it actually fell to bits. It kick-started my obsession with strange films, which has just gone on and on. I still regularly run cult film courses at the Broadway Cinema – it’s directly because of that book.

What about as a teenager?

I continued to read comics and by the time I was 14, they were changing rapidly. It was a golden age to be into that genre. Alan Moore was king and people like Frank Miller and Grant Morrison were all producing basically adult stories about other worldly characters. It was all about taking superheroes and supplanting them into ‘real world’ style problems. Moore especially took titles like Superman and Swamp Thing, characters that had usually been seen as throwaway, and presented us with more hard-hitting stuff, which tackled topics like sexual assault, domestic violence, environmental destruction and gun control. This was about 84’. He was so ahead of the game it was unbelievable. Alan Moore really opened my eyes to a lot of other writers too, like H.G. Wells, William Burroughs, [Charles] Bukowski, Arthur Machen and John Wyndham.

Reading books has never been a popular pastime for teenagers, particularly boys. What do you think is the way to improve this?

This is probably where I’m supposed to offer some helpful soundbite but I honestly don’t know. I’ve contributed to projects like Dawn of the Unread, which was specifically set up to address those problems, and I think things like that can help. I will say though, having worked in schools with organisations like First Story, that a lot of teenagers do read and the students I worked with weren’t privileged or extraordinary or anything, these were working-class kids. The key, I think, might be to encourage interest, whatever the topic is, encourage that and as long as the person has the basics, in terms of literacy etc., they will most likely read in order to expand that interest. The problem is that ‘reading’ is often presented as work or something that needs to be done. I didn’t really like being told what to do as a teenager and I’m going to stick my neck out and say that perhaps other teenagers don’t like being told what to do either. But if you encourage ‘interest’ in music, writing, comics, rock climbing or whatever, then, I would suggest reading will follow. There is a danger though, that we are turning more and more in to a society where boredom is being outlawed. Changes in technology mean we are potentially losing the ability to drift off, stare out of windows, imagine. Boredom is good place. Things happen there.

You have previously spoken about your admiration for East Midland writers Jon McGregor and Nicola Valentine. McGregor’s work has been described as depicting an ordinary world that is shabby and melancholic. Valentine’s work is also hard-hitting and has depicted a desperate world of drugs and crime. What was it about their style that impressed you?

At their best, I think both those writers produce work which is unmistakably theirs. Jon’s absolute attention to detail, his meticulously placed sentences and playful use of narrative are what make his books stand out to me. What initially drew me to Nicola’s writing was The Killing Jar, which I still maintain is one of the best books I’ve ever read. The thing which is most impressive is Kerrie Anne, the voice of the book. It’s a character which anyone who’s working-class and has been bought up in and around the streets of Nottingham or a similar city, will recognise and identify with. I know that Alan Sillitoe really liked the book and you can see why. It does have a kind of Saturday Night and Sunday Morning for the ecstasy generation, feel about it. The structure of the story is very clever; without giving anything away, it’s a great use of ‘bookending’. You should see it coming but you don’t. That’s what makes it, and Nicola, brilliant.

What lessons have you learnt that will benefit up and coming writers?