Coal in the Blood: David Amos and Natalie Braber Tell Us About Their New Anthology

At secondary school in the late 1960’ / early 1970’s, poetry and literature did not play a large part in my life. I was put onto science and technology courses for my O Levels which was a mistake, the subjects I was really interested in at school were in the Arts and Humanities, but these didn’t get you a job! I left secondary school as a dissatisfied under-achiever and following a brief job at as a Stores Lad at a local Co-op Store, I went to the pit and was there for the next twenty-four years.

My working life at the pit came to grief as the coal industry went into terminal decline and I left the industry in 1998 at the age of forty-one. Following a brief job employed as an Administration Officer for the National Federation of Anglers (some say I was carping about!), I gained my BA Degree in History and Politics from the University of Derby at the age of 45. I then entered the world of Adult and Community Education as a Tutor and it was there that the Arts and Humanities, which I was interested in to start with, started to flourish. It was just as if it had been stored up for thirty years!

There were musicians, singers, stand-up comics, painters, creative writers and pitmen poets, many with such talent that I wondered how they ever ended up working down a coal mine in the first place!

During my time working at the pit, I took notice of the immense amount of talent, which existed amongst the miners. There were musicians, singers, stand-up comics, painters, creative writers and pitmen poets, many with such talent that I wondered how they ever ended up working down a coal mine in the first place! I started to collect some of the poems and stories written by local miners, most of which related to real life pit incidents, and it was some of these, which formed the basis of Coal in the Blood. Coal Anthologies have been compiled which included literary work from the Great North East and South Wales coalfields, but virtually nothing had been done in the former East Midlands coalfield. It was while working as a researcher with Natalie Braber at Nottingham Trent University from 2016 to 2019 that the idea for an East Midlands Coal Mining Anthology was hatched, coming to fruition in November 2021. 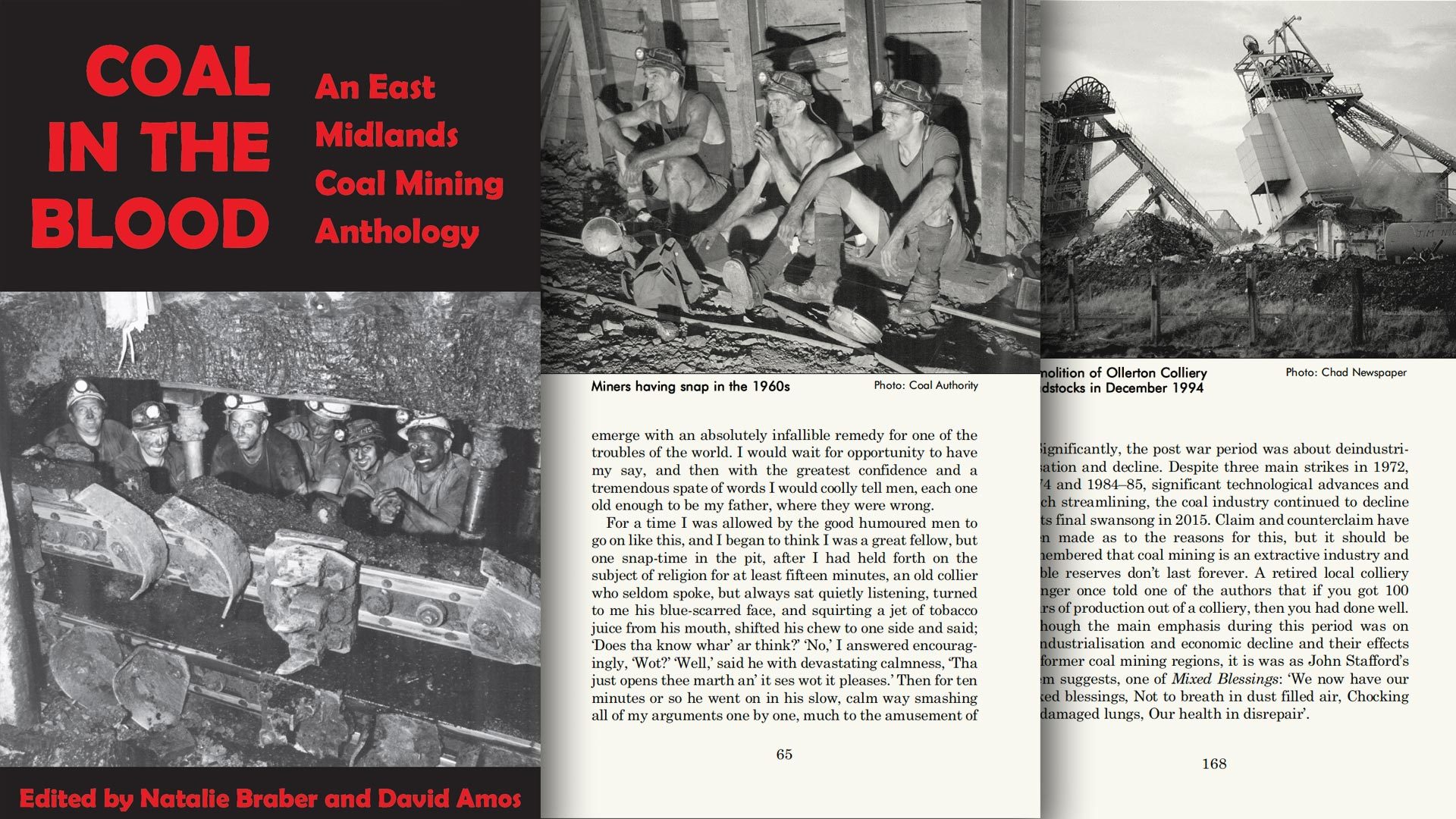 This is the first collection of poems, short stories and anecdotes about the coal mining industry in the East Midlands. The publication brings together writing from around the region, some by established poets and writers, including some pitmen poets, and some by new authors.

We want to ensure that lives are not forgotten and that memories of ‘life in coal’ are passed on to younger generations.

For centuries coal has been mined in the East Midlands and it has helped to shape the identity of the region. Many pit communities formed around the collieries and the daily routine of mining affected everybody’s life, not just the life of miners and their families. The last deep coal mine in the region closed in 2015, which was Thoresby Colliery, and with it, a way of life is now rapidly disappearing and we want to ensure that lives are not forgotten and that memories of ‘life in coal’ are passed on to younger generations.

David Nunn says: ‘British miners have always tended to be men apart’. What binds them together is a very strong sense of common identity and camaraderie. The embodiment of this feeling is the community – the allotments, the brass bands, the galas, the sports teams, the holidays and the joint days out. In many mining towns, the pit was relied upon to sustain these communities. Much writing about miners is not written by miners – they become someone who must be spoken for, rather than spoken with. In this book we are aiming for authentic voices from miners as well as their families and friends.

Some of the pieces in this book are emotional and hard-hitting. Some are rude or offensive, but many of them are very funny! Humour was crucial in coal mining, acting as an antidote to such dangerous working conditions– all the dirt, the danger and the darkness.

Coal in the Blood: An East Midlands Coal Mining Anthology, edited by Natalie Braber and David Amos, and published in 2021 by Trent Editions is available through the Mining Heritage website and other book stores.