Closing Time At the Royal Oak 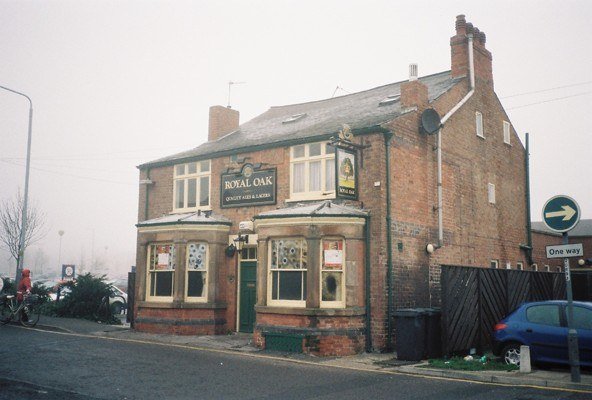 Pubs. Remember pubs? They’re those fantastic places you can have a sit down and have a drink and see what happens. Secular churches for a community, there is often no better measure of a place than its density and quality of pubs. By this metric, Nottingham is an astoundingly fine place, with much to spoil us. Today they reopen, albeit it on an outside-only basis, for us to once more sip on that collective joy.

Yet some pubs are less missed than others, and one that dropped out of the local crawl in neighbouring Beeston, well before it actually shut its doors for good and became an Indian restaurant, was the notorious Royal Oak. This pariah of local pubs eventually called time for the final time over a decade ago, and wasn’t much missed. I recall only once visiting in all my years of Beeston boozing, and left after a swiftly-necked pint. Sitting squat on the a forgotten back-street, it reincarnated as the fine Nimboo Restaurant, until that fell victim to the vicissitudes of the restaurant business.

Yet all pubs have a life story: The Royal Oak’s goes back much longer than my own memories. Usually these are stories that are told, with sparkly-eyed nostalgia and increasing volume, by regulars of a ruddy complexion as they lean on the bar -top. They mostly exist there, and exclusively there, and as the storytellers pass, so do the memories. Few pubs ever have the honour of their story, or at least a significant chapter of their story, being committed to print, let alone one that is written by a master of both prose and poetry such as long-time Beestonian, publisher, poet and jazz musician John Lucas.

Closing Time at the Royal Oak is a book that chronicles 20 years of Lucas’s love affair with the pub, beginning in 1969 through to 1989. No mere tap-room whimsy here though: in telling the tale (split over four chapters representing the four managements of the pub over that time) Lucas tells the tale of our town: the decline of the industry that once fuelled the local economy; the changing social mores; the very idea of what a ‘pub’ means. He references Orwell’s panegyric ‘Moon Under the Water’ essay on the pub as Platonic Form, and it’s clear why: Lucas also sees pubs as a barometer and a mirror on society, the very essence of what a town is. Just as those navigating cities and towns will use pubs as waymarkers, social historians can read much into an area and an era through the fortunes and nature of its pubs.

That is not to give the impression that this is an over-intellectualism of the boozer: far from it. Lucas tells the stories of former locals – some you will recognise to this day, some currently camped outside a pub door, waiting for the Great Reopening to resume their life of beer and chat – with much detailed fascination and an eye for the humorous tidbit: he tells how that famous local ale ‘Shipstones’ was often anagrammed into ‘Honest Piss’; and the local branch of CND went by the name ‘Beeston Anti-Nuclear Group’, aka ‘BANG’. Such short sharpeners are glorious invigorating chasers to the beer of the main text.

The Royal Oak is set to disappear soon, much like the many other pubs Beeston has lost over the years: the Prince of Wales, The Durham Ox, The Queens, The Cow et al. It is a sorry husk on Villa street. But all pubs ARE essentially husks: it is the community that animate them, the spirit that burns within. The Royal Oak may soon be but rubble, but no matter, with Lucas’s book there is a pitch to immortality, a slice of its story forever preserved in print; and, should you wish to treat yourself to one of the finest books about our town that I’ve ever read, your bookshelf. To make that happen, order now from Five Leaves.