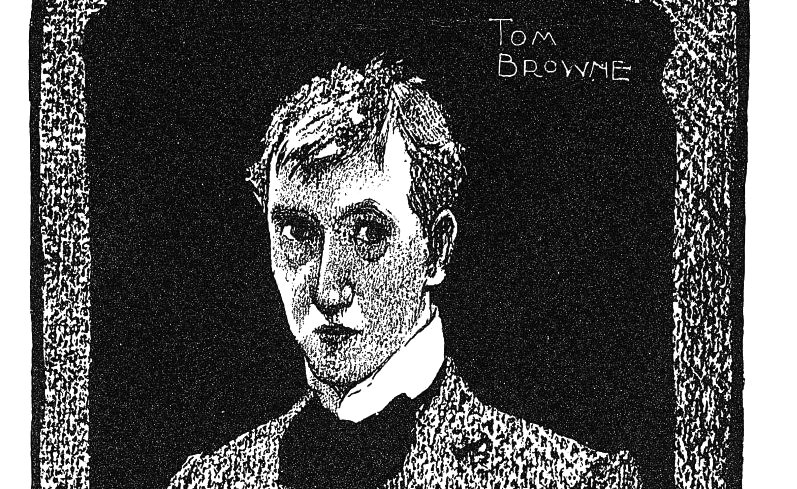 Back in the days when Nottingham and its environs boasted a strong industrial base, we were rich in graphic communicators. Every manufacturer had its own art and design studios, and learning the skill of visual communication was an important part of the nation’s education system. There were plenty of job opportunities in the busy studios of the Raleigh, John Players and the rag trade, and freelance work was readily available, particularly in the booming comics scene at the turn of the Twentieth Century.

Undoubtedly our most famous early comics creator was Tom Browne, the man who created the iconic Johnny Walker whiskey logo. Tom honed his innate talent during a five-year apprenticeship at a Lace Market print shop before taking the plunge, turning freelance and heading off to London to make his name. By the age of 25, he was a regular contributor to Alfred Harmsworth’s seminal Comic Cuts, penning no less than six full-page strips a week. But he still found time to work both sides of the street.

The year after he started at Comic Cuts, Tom launched his Weary Willie and Tired Tim strip on the front page of Illustrated Chips. Modeled on Don Quixote and Sancho Panza, his weekly romps with a couple of mischievous tramps became the template for future generations of “naughty-but-lovable” character strips, typically seen later in The Beano and Dandy.

Credited with being a major influence on, among others, Leo Baxendale (creator of The Bash Street Kids), Tom was also known for his huge output of adult strips and gags for Punch and The Tatler, and for a seemingly endless stream of humorous picture postcards. Fittingly for someone born in Nottingham, he was the first in a thin line of cycling cartoonists that can be traced through to the present with comics creators like Brick and Eleanor Davis.

Between the wars and after WWII, it is difficult to nail down local talent working in the graphic narrative medium, mostly because publishers like DC Thomson never credited their creators and fiercely retained possession of their artists’ copyright (Baxendale fought a seven-year battle to regain ownership of his work from Thomson). The modern era, however, finds the city home to a notable crop of comics creators, most of them emerging from the indie world, where self-published comics are considered the R&D Department of the mainstream.

Among them are Jamie Hewlett, Luke Pearson, D’Israeli and Ian Culbard, and I’ll be telling you more about them and those coming through, like award-winner Carol Adlam, in later editions. Perhaps more so than prose writers, comics creators are notoriously solitary and single-minded characters (have you any idea how long it takes to produce a single page of graphic literature!?), but do not underestimate their quietly industrious contribution to the literary culture of our parish and beyond.

Finally, it is worth mentioning that both our universities are at last dipping their toes into running comics courses, both academic and practical. The city has one of the very few Hon. Ass. Profs. of Comics in the country, and boasts a bi-monthly comics talking shop (Nottingham Does Comics), its own comics convention (Nottingham Comic Con) and arguably the best comic book shop in the land (Page 45).