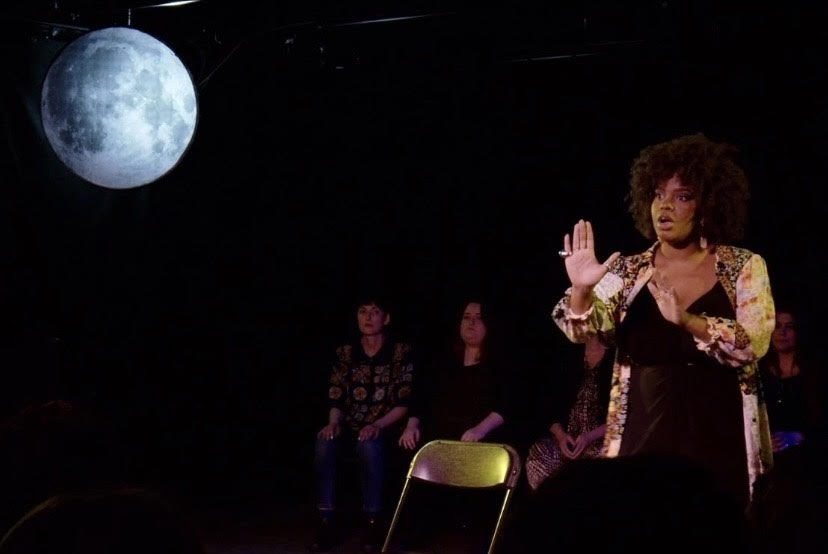 Nottingham is a literary powerhouse, but it is exciting to see another powerful voice emerge from this City. Poet and creative Cara Thomson – also known on social media as @CreativelyCandid – grew up in Nottingham, and going on to Manchester University to gain a Masters’s degree (with a First class honours) in English Literature, before returning to her home city after four years in 2020.

Cara described her poetry writing career as something she ‘accidentally’ started doing. For her first serious poetry-writing gig, Cara’s friend approached her with a proposition of writing a poem for an event she was running. “I think you’ll be good at this” her friend insisted, recognising something in Cara. She tried it, she liked it, and this sparked Cara work in poetry.

I think as creatives, we can be our own worst critic sometimes

Cara is grateful for growing up in an era that is more open-minded than in past times: ‘I think that I have been quite lucky to live in a generation that is passionate about understanding.’ Her powerful contribution to the way society treats one another is her award-winning poem ‘Island Screams’, a poem that interrogates the question ‘where are you from?’ , especially when asked of British-born black people. ‘When people ask it, they’re not really asking where you are from… they’re highlighting that you are different.’ The poem would go on to win the International Slamovision Contest.

After experiencing this first hand, Cara says the poem is for the kinds of people that would ask this question. ‘I hoped people of colour resonated with the poem but I think poetry is most powerful when it is hitting someone in a way they’ve never thought about before.’ This poem projects the thoughts that people of colour experience when asked ‘Where are you from?’ Cara is extremely proud of her Jamaican heritage and it shows in her beautiful poetry.

Winning the world-renowned competition, she now has ‘more trust’ in the listener/reader of her work. She explained how she would now feel more confident sharing even more poetry and pushing subject boundaries, overcoming the fear of what others may think ‘I think as creatives, we can be our own worst critics.’

Cara hails from a particularly talented family. From her grandmother being her own businesswoman whilst raising a family of eight; her father successfully writing a book of his experiences being an ex-evangelist or her great-grandmother reciting Shakespeare (off the top of her head!) before bed. Cara describes the women in her family as her inspiration. ‘I idolised my grandmother in a sort of way.’ Cara also expresses her enjoyment of Maya Angelo and Toni Morrison’s use of imagery and their ability to ‘talk about heavy subject matters in really beautiful ways.’

As a newly graduated student, Cara jokes that in ten years, she would like to be financially stable. ‘The dream would be Freelance work, doing projects and writing.’ Much to young Cara’s surprise, she now can not imagine herself leaving Nottingham. ‘I think when you leave home, you learn to appreciate it a lot more.’ Continuing to sing the praises of Nottingham’s creative scene and how she is excited to watch -and help- it grow. She compares Nottingham’s creative community to that of Manchester’s; yet Cara felt immediately more ‘welcomed and involved’ in Nottingham. She explains how she believes that ‘going somewhere completely different is something everyone should experience.

Cara Thomspon is now a part of GOBS poetry collective that paved the way for her to be the Marketing Assistant for the Nottingham Poetry Festival. ‘Nottingham has always been my home, I can’t see myself setting base anywhere else.’