Building a Better World through Comics 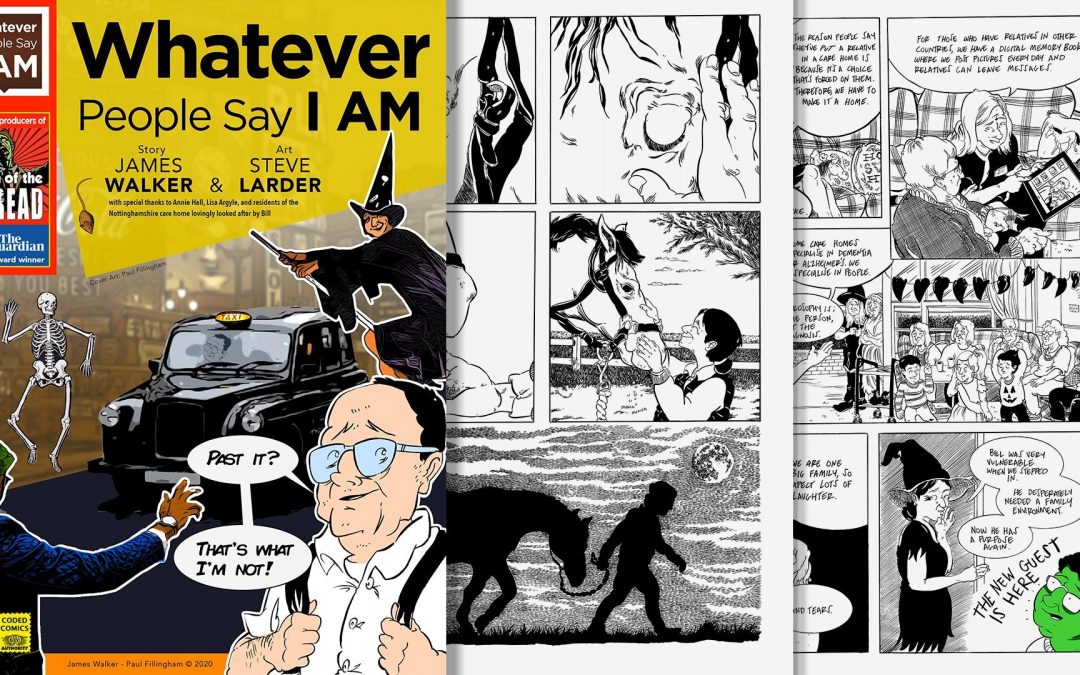 I’m worried about the world we live in at the moment. From Brexit to Covid to the US elections, we’re becoming increasingly fragmented and tribal. These divisions are amplified by social media platforms which were meant to enhance democracy by giving voice to everyone. But now that we can all speak; we’ve forgot how to listen. The world has become a very noisy place…

It’s for this reason, I’ve spent the last three years working on a comic series that aims to dispel myths around identity. Each issue has taken around two years of interviews and research. This is good old-fashioned s-l-o-w journalism, offsetting the immediacy of social media. If we want to challenge stereotypes, prejudice and simplistic thinking, we need to listen.

The project is called Whatever People Say I Am (yes, another nod to Sillitoe, gawd bless him) and each issue focuses on a particularly theme – the elderly, refugees, the unemployed, the lonely – and of course everything you presume to know about these types of people – that’s what they’re not. 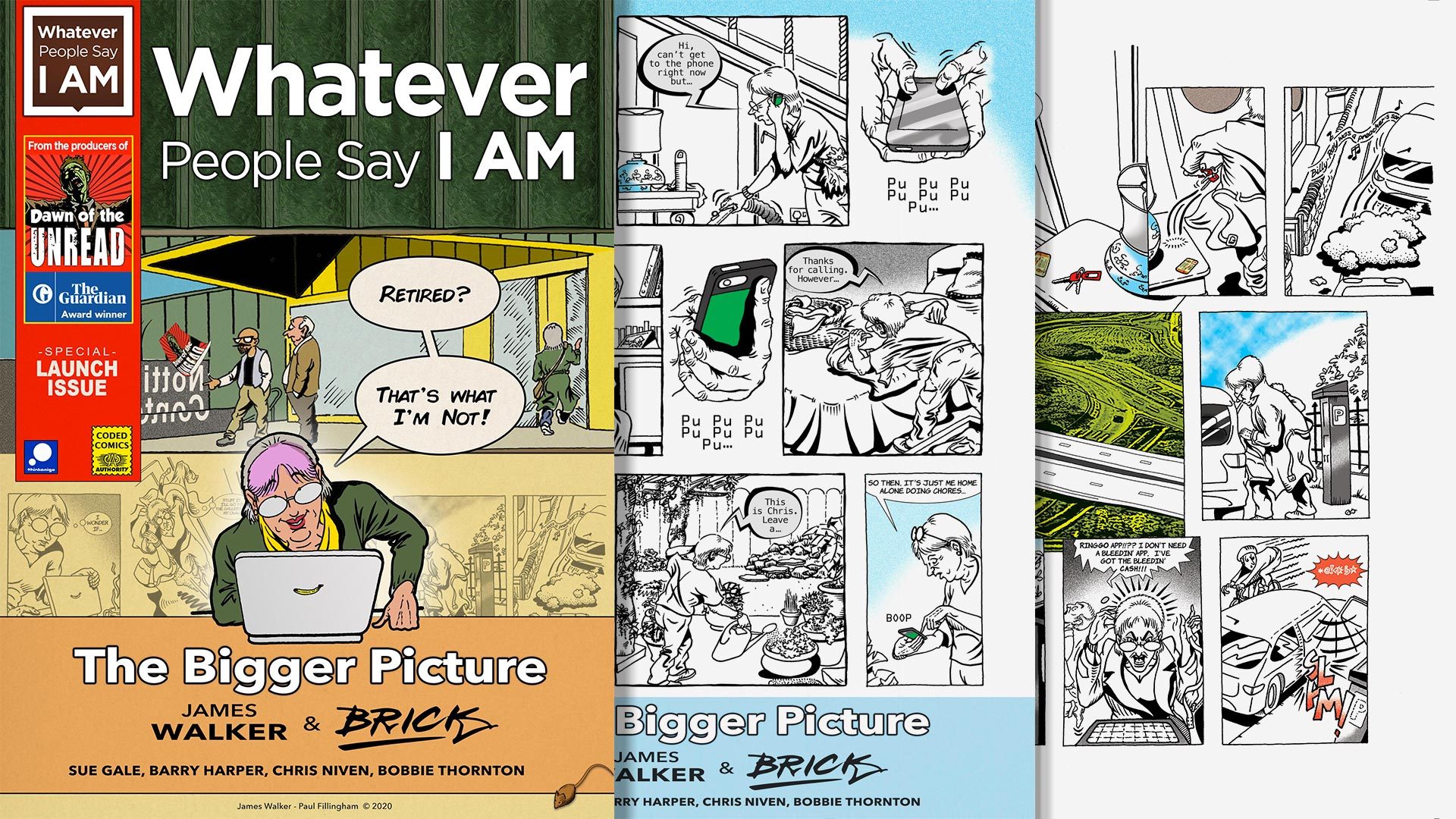 The aim is to take the reader from birth to death (the last comic in the series is with someone who works in a funeral parlour) but at present, the comics are lobbed up online as and when myself and Paul Fillingham get a chance to finish them. We have three issues so far.

The first is called ‘The Bigger Picture’ and explores the role of the arts in providing an identity in retirement. Drawn by political cartoonist Brick, it’s the result of two years of focus groups with four retired people from Burton Joyce. As we were talking about the importance of the arts, I wanted them to have ownership over the way they were represented. So, we hosted some writing workshops and together we created the story.

The second comic, ‘The Knowledge’, is narrated by Bill – a cabbie with dementia who finds dignity and meaning in a care home. It’s set on Halloween because it epitomised the ethos of the care home –staff getting dressed up for no other reason than to make every day as pleasurable and varied for the residents as possible.

The home is run by an incredible woman called Annie Hall who refuses to view people by their illness or deal in labels when a forename will do. True to Nottingham’s rebellious spirit, Annie is an innovator and rule breaker. She explained to me, as we walked around the home, that people with dementia may not remember who you are, or what they did a few minutes ago, but that doesn’t mean that they don’t have feelings. We just need to be more thoughtful and creative in how we interact: blow softly on his face and watch him smile, open the curtain so the sun warms his skin, ask staff and relatives to bring in new born babies so the room is full of the smell of life, play music from their childhood and watch them sing along.

Nobody chooses to be put in a care home. It’s often a last resort and incredibly stressful for all involved. But some of us will end up there whether we like it or not. According to MHA– the largest charity provider for the elderly, ‘Around 4 million older people (40% of people aged 65 and over) have a limiting long-term illness or disability, and it is estimated that this will rise to over 6 million older people by 2030′.

Annie completely changed my perception of age-related illness and the purpose of a care home. As for Bill, I miss him desperately. With my own parents and grandparents long dead, I felt a strange connection with Bill – like I’d known him all my life. I would love to see him again, when it’s safe to do so, and tell him that I wrote a story about him because I enjoyed his company so much. That’s the beauty of writing and research. It gives you an excuse to befriend 87 year-old men in care homes who you would never have met otherwise.

Our third comic, released today, is called ‘What is Coming’ and dispels myths about refugees. I interviewed people from a wide variety of cultures, countries and backgrounds, but in the end decided to focus on Syrian refugees. But who would be the narrator when they all had such incredible stories? There was the farmer who couldn’t keep his thumbs still during our interview because he had milked a cow at the same time every day for 20 years, or the man from a small island who missed fishing for his food, or the teenage boy who wanted to be a pilot because he’d lived opposite an airfield during his stay in Jordan as they fled Syria. 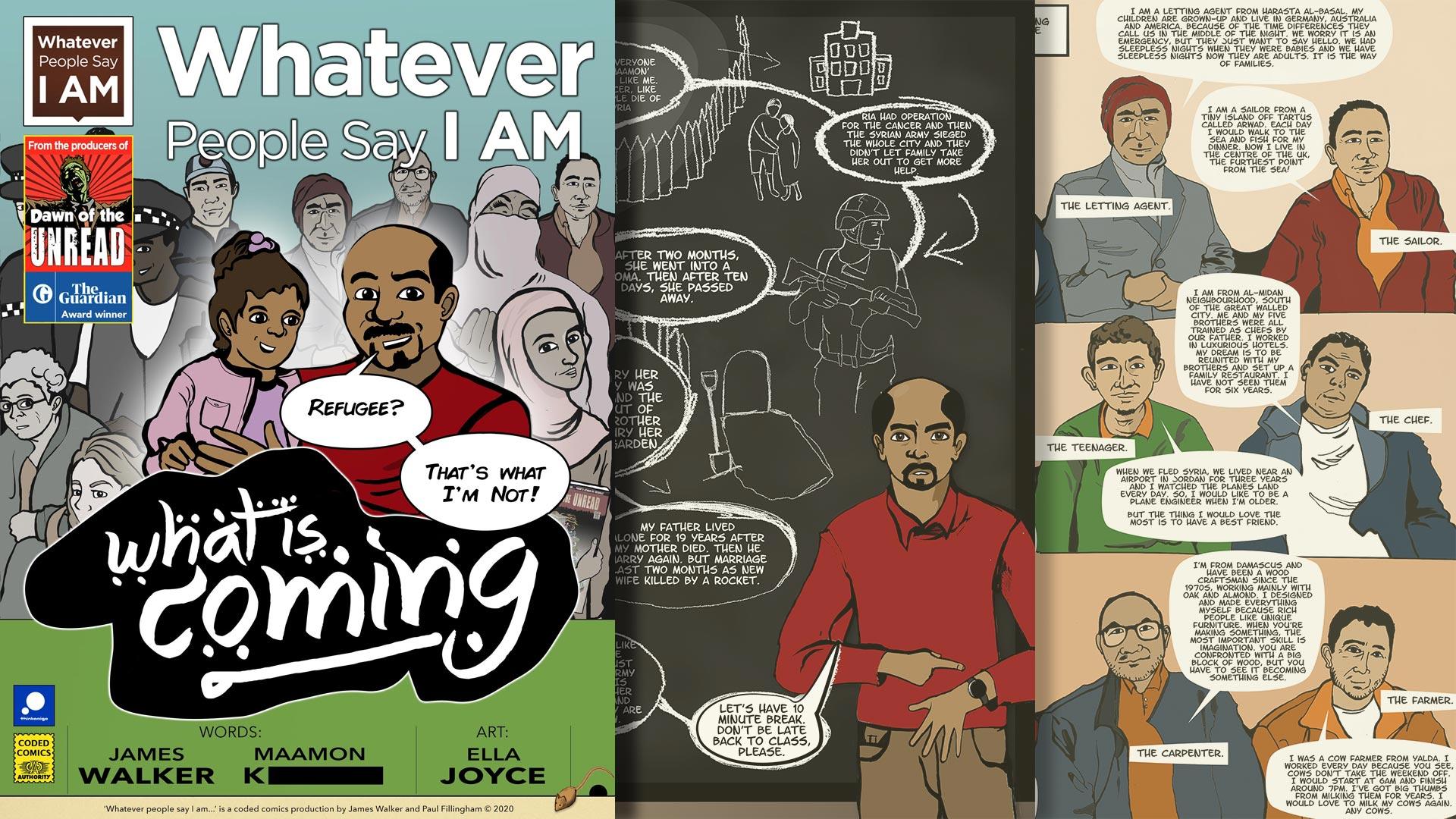 What struck me about these stories is how much people missed their lives, friends and family. They did ordinary jobs and lived ordinary lives. The idea that Fahd, who saved two penalties in a cup final for the Syrian national team and represented his country in qualifiers for the Olympics would want to give up fame and his sporting career to live in a house in Mansfield is insulting and ridiculous. He, and the other Syrians, were here for one reason. To live.

In the end, I opted for Maamon as my narrator, because he epitomised the courage and resilience I witnessed over and over again. From stacking shelves in Sainsburys, to setting up language schools to help others, he keeps going. But his past is so traumatic he broke down during our interviews and we had to take sustained breaks – hence why this comic has taken over three years to finish.

None of us know what is coming, which is why this project is so important to me. It’s not just about writing stories. It’s about changing perceptions and helping to ‘build a better world with words’. I want these stories to make a difference. As with the Dawn of the Unread format, we have included embedded essays so that readers can gain deeper context to the stories and learn more about the people involved.

These first three stories also have another function, to utilise research by Dr Loretta Trickett and make her findings more accessible to a wider audience. I work part time as a senior lecturer in digital humanities at Nottingham Trent University and I want the incredible work that goes on here to have a deeper impact on society to help bring about meaningful change. There’s no point hiding it away in journals that only a privileged few have access to. Therefore, we have taken her research into new and emerging communities and, along with the interviews, drawn out important themes to shape our three stories.

Now stop reading this and go and have a look.