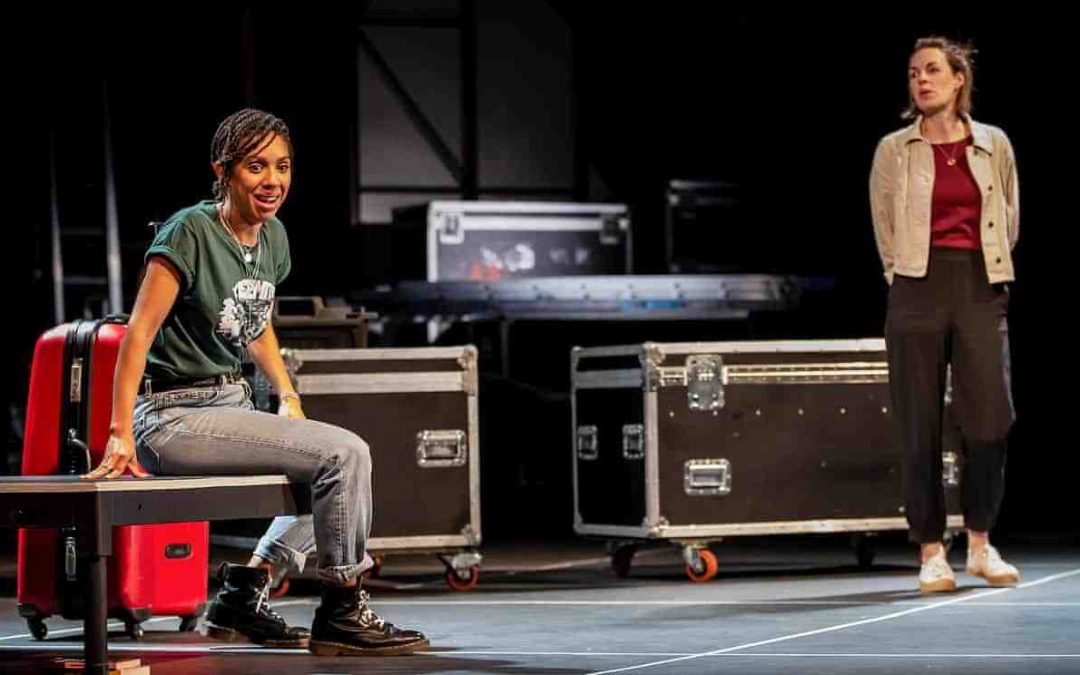 It was sweet, last night, to be at Nottingham Playhouse, to see a new play by James Graham. The playwright is from Mansfield and used to work on the door at Nottingham’s Theatre Royal but this was his first new play to be staged in the city where, as he told Geeta Pendse this week, he learned to love theatre. He’s closely connected with the Playhouse, however, having become an Associate Artist while I was on the board ( I served for seven years, finishing my term at the end of last year). If I remember correctly, he was keen to do a play with Artistic Director, Adam Penford, but was rammed with writing commitments for the next three years. Then the pandemic struck, theatres closed and lots of writers had lots of time on their hands. We seem to be divided between those of us who got a lot of writing done during this time and those who didn’t. Hard to predict which will be which.

Graham’s tightly written, impeccably structured new play about the pandemic, ‘`Bubble’, had three sold out performances in a socially distanced Playhouse (seating 150 instead of 700), all of which were also livestreamed. Not being on the board any more, I don’t know the livestream figures, though I doubt that they came near to compensating for the takings a full house would have brought in. Normally, a hot play featuring two big names – Jessica Raine (Call the Midwife) and Pearl Mackie (Doctor Who) – would have have had capacity crowds for around twenty performances. Normally, however, these two actors wouldn’t have been free. And they did a great job, aided by sharp direction from Adam Penford and minimal but effective staging.

This 70 minute romcom did have quite a bit in common with the last new play of Graham’s that I saw on stage, Labour of Love (now that’s a play which really ought to be staged in the East Midlands, being set in a Mansfield MP’s constituency office). He’s great at providing snapshots of a particular time, writes women well and does shifting timelines superbly. Here, the actors switched which side they stood on the stage while a screen briefly announced Bubble or Apart to indicate which of the two alternative timelines we were in – one where the couple impulsively decide to move in with each other after a first date just before lockdown or one where they develop their romance online. The politics is kept light but several key points of the pandemic period – black lives matter, Johnson being hospitalised, the NHS clap – do appear.

The play is set during the first lockdown and, as we enter the second (Nottingham likely to move to tier three one day this week), the play occasionally felt too soon. That said, if not now, when? In a few weeks, it may well feel dated. Graham is good at plays that capture a moment and aren’t designed to have a long shelf life, though the writing in this one is so sharp and funny that you’d expect to find it performed on the Edinburgh Fringe. Anyway, as socially distanced one handers or two handers become the norm for a year or two, it may well return to British theatres.

Mainly, I have to say, what a treat to be back in the Playhouse for the first time in months. We were looking forward to Piaf just before lockdown, along with bunch of other stuff that may or may not be back next year. It was great to see how happily and safely the Playhouse team handled everything, how happy everyone was to be back inside, albeit with very careful exits and entrances. These meant that, though there were loads of people I knew at the play, I didn’t get to speak to any of them, only having the chance to wave at former artistic director Gile and his wife, Tamsin, from a few rows in front of them. Congratulations to the Playhouse on staging new work in these challenging times. Theatre will survive, especially if people support it by going when they can or joining paid livestreams when they can’t (and these, of course, mean that people from all over the world can attend, which is a bonus).

Nottingham Playhouse’s Unlocked festival runs until November 9th. Check out the programme and please support them however you can. While all Arts organisations are grateful for the money received from the Cultural Recovery Fund, it’s worth pointing out that the East Midlands did worst of all the regions and sits at the very bottom of the chart for money awarded. There are some very tough times ahead and we’re going to need a lot of luck, energy, imagination and sheer bloody hard work to get through them.