For forty-seven years I have been treated by the same Carrington dentist, and for forty-six of them I’ve turned up an hour early for my annual checkup in order to sit there and read the surgery’s latest Broons album. Needless to say my dentist is a Scot and a lifetime fan of the comic strip family from Auchenshoogle, whose collected bi-annual once alternated with Oor Wullie, the spiky haired lad with a catch phrase appropriate for a dentist’s; ‘I nivver get ony fun roond here!’ Since 2015, both strips have become annuals, but what my dentist didn’t realize was that both were originally drawn by local lad Dudley D. Watkins, born in Manchester, but settled in Nottingham since age three and latterly educated at the city’s School of Art, now Trent University.

The Broons and Oor Wullie have appeared weekly in The Sunday Post since 1936, and both were drawn by Dudley, who also produced strips for The Beano, The Dandy and The Beezer, also D.C. Thomson titles. His simple, economical line drawings and brilliant handling of gesture and body language came to typify British cartooning of the Forties and Fifties at its very best, something only The Daily Express’ editorial cartoonist, Giles, could equal. But what is extraordinary about Dudley’s work is that, illustrating a story about a family of nine in an overcrowded tenement, and doing it in four lines and generally eight panels, he managed to depict the whole drama full-bodied. In other words, Dudley only occasionally used close ups or medium ‘shots’, the whole body of all featured characters ever present in the panels throughout the story. 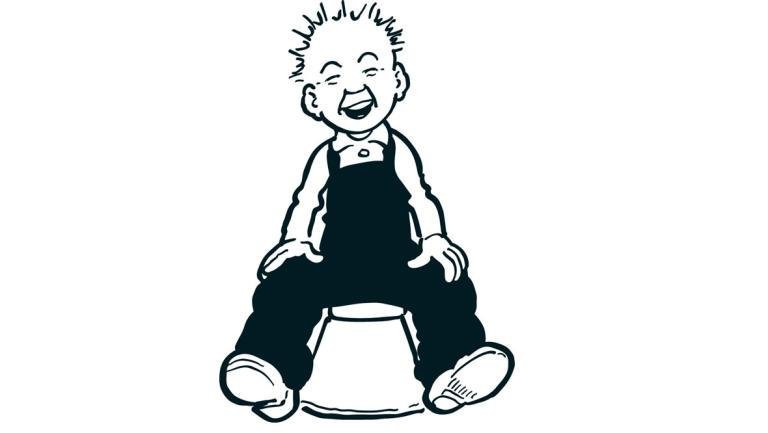 The creative drive behind both The Broons and Oor Wullie was R.D. Low, managing editor of Thomson’s children’s publishing and the man who launched The Dandy, their first kids’ comic. Neither writer nor artist have received the recognition they deserve for their huge contribution to children’s literature in the U.K. (at their height, just one of Thomson’s comic titles was selling 800,000 copies per week), but then they were in Dundee, a long way from the literary circles of London where accolades are decided. Written in Modern Scots with interludes of common English, the titles were probably deemed too parochial to merit serious consideration down south, but therein lies their strength and the huge appeal they have outside the British isles. The Scots diaspora could probably keep Thomson handsomely in profit with overseas sales of The Broons alone.

Knowing something of the tyranny of Thomson’s deadlines and working practices, it is no surprise that Dudley died in 1969 in harness, at the drawing board, victim of a heart attack. He expired at home on Reres Road, Broughty Ferry, round the corner from my Dad’s childhood home, now marked by one of only twelve Historic Scotland’s Commemorative Plaques. It was seven years before D.C. Thomson found an artist with the skills to replace Dudley, seven years when reprints sucked in the next generation of Broons and Wullie fans curious to know what their parents and grandparents were so excited about.

Dudley was a deeply religious man who kept a huge Bible on his desk, the broad margins of which were a smorgasbord of his doodles and notes. He did produce Bible stories, or at least moralizing stories, for both Thomson and the Worldwide Evangelisation Crusade, but his dream was to produce the first comic book version of the full Bible. Judging by his Road to Calvary series in the Sparky annuals, it would have been something to behold.

All images courtesy of DC Thompson.