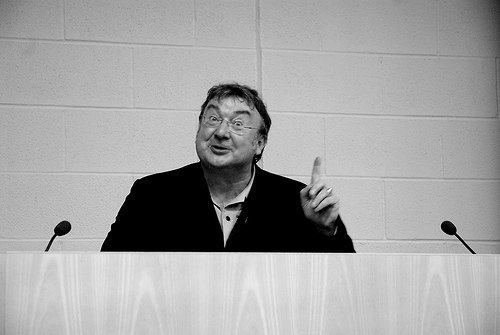 Bouchercon memories are hazy and fragmented. Since then a lot of water has been passed. Did Sam Goldwyn ever say that or is this just movie mythology? Given the inspiration of ‘Noir In Cinema’ in Cattolica, ‘Shots In the Dark’ in Nottingham always had the aspiration to be a literary event as well as a film festival. Which is why Adrian Wootton and myself flew via Chicago (I saw a man who danced with his wife) to Pasadena (where grass is greener) to check out the 1991 World Mystery Convention. This may have been the first time Adrian had ever visited the City of Angels, though he is now a frequent habitué, successfully convincing production companies to shoot on the streets of London.

I had certainly not returned to LA since my shuffling days of 1977 when after a walk down the Avenue of Stars and, inspired by Jessica Mitford’s ‘The American Way Of Death’, a necessary trawl up to Forest Lawn cemetery (founded by Hubert Eaton – could he have been a distant relative?), I hitch-hiked back to Manhattan, where I was then living, cursing Jack Kerouac every chilling moment on the freeways of Missouri that I’d thumbed a copy of ‘On The Road’.

I do recall that before the colloquy commenced, we took the Universal Studios tour. Being driven past the ‘Psycho’ house on the hill was both fascinating yet somewhat disappointing as we escaped without mutilation. By far the most impressive experience was the Sensuround trip through an ersatz alpine landscape when our railroad coach seemed truly to buckle and collapse. As a stiff-upper-lipped English chap I became somewhat aeriated when we were prevailed upon to give our names before boarding the ET experience, which involved helping the wrinkled alien on his way back to his native planet, only to get it, and even to be rather moved, when at the end of the ride the diminutive automaton waved a grateful farewell with a ‘Thank you, Adrian… Thank you, Michael.’

That evening we were invited to a reception in a bookshop specialising in crime and mystery titles, where out on parade was a most impressive exact replica of The Maltese Falcon on sale for 450 dollars (the stuff that dreams are made of). The most abiding memory, however, was meeting a literary idol: Dorothy B. Hughes no less! She kindly signed copies of ‘In A Lonely Place’ and ‘Ride A Pale Horse’ and, amazingly, I learned that she had grown up in the same Taos commune as our own D. H. Lawrence. Though Bertie was long gone she shared her recollections of Frieda. I couldn’t help asking her what his widow thought of DHL. ‘Oh, he was wonderful!’ That’s not, I said, how they remember him in Eastwood where he was considered a ‘mard arse.’

For some now-forgotten reason I went back to LA for a meeting at the Chateau Marmont on Sunset (you won’t come back from Dead Man’s Curve) with Stephen Frears who was then shooting ‘Accidental Hero’. Over a Californian breakfast of nuts and fruits we were unexpectedly joined by Tony Garnett. Deluded as ever, I thought I’d arrived. I’ve never been back… Not entirely true, come to think of it: we closed up four blocks of Hollywood Boulevard (Hooray for Hollywood) for two nights on the trot to shoot ‘Signs and Wonders’, but that was many years later. I can’t, however, forget that the cab fare back to Pasadena was a ruinous 75 dollars!

Having experienced the excesses of the crime writers at play, once again the vain-glorious reckoning: ‘We could do this.’

Thus it was that the following year a merry band came riding through the glen to Toronto to mount an Olympian bid to host the Bouchercon in Nottingham. Distorted memories of the capital of Ontario: the best ever frankfurters with sauerkraut from street-vendors, far surpassing those of New York; a big tower I chickened out of ascending for reasons of vertigo; a self-righteous woman, with whom I now have total sympathy, berating me for lighting up a Camel in the hotel lobby; a side trip to Niagara Falls (shuffle off to Buffalo) squired by a dead-ringer for Edward Woodward as The Equalizer. But I can’t evoke any reminiscences of how we delivered our collective pitch in a vast ballroom after the plates of rubber chicken and melting sorbet had been cleared. It was all rather tense, as the only other time Bouchercon had been held outside North America had been in London, the organisation of which was not, by all accounts, considered a great success to put it mildly. Which other cities were bidding against us? Maybe one was Amarillo (every night I lie on my pillow).

Nottingham was definitely the rank outsider. Our city did not have the hotels, did not have the economic support (tell me about it), did not have the background or experience to mount such a significant international jubilee. But somehow we must have hit the spot. We had the enthusiasm. We had the desire. And we pulled it off. And we won the vote. And they came. And it was really great.

That, at least, I can remember.

READ David Belbin on ‘Shots in the Dark’