Billy Ivory on John Harvey at 80 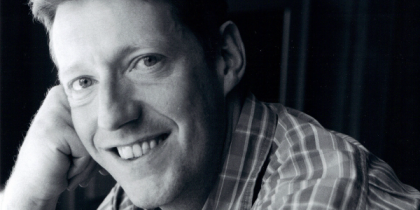 His exhalation of despair after our first corner, on 87 minutes, is headed into the Cattle Market, will always make me giggle.

Of course, John is an ardent Notts County fan. He shook off his dirty Southern habits when he moved to the area in the 1960s and subsequently dedicated himself to becoming a supporter of Nottingham’s number one football team with typical gusto and intensity. Even since his return to the Big City, he has continued to make regular forays up to Meadow Lane so as to cast a steely eye over the present eleven incumbents. He’s terrific company at a game. He mixes just the right level of bewilderment, fury and blind optimism to qualify as a true and life-long supporter. His exhalation of despair after our first corner, on 87 minutes, is headed into the Cattle Market, will always make me giggle.

The truth is, it’s a joy to make contact with John in whatever circumstances. And whenever I do, I always marvel (as I did a couple of months ago having finished the aforementioned Body and Soul – the conclusion of his Frank Elder series) at just how modest he is. Especially when one considers how much he has written, across so many platforms, about so many different things, and yet ALWAYS maintaining the very highest standards of execution – this last book a shining endorsement of that fact; thrilling and wise and hard and sad.

I sometimes think with his keen interest in Jazz and Poetry and Film and Fine Art – along with his deep roots in novels, Noir especially, John might reasonably be described as l’uomo universal – the true renaissance man! He’d laugh if I said that but it’s perfectly sensible especially when one recalls that the renaissance happened in Italy, Juventus are an Italian football team, and Notts County sent them a stash of surplus kit way back in the late 1800’s when la Vecchia Signora was struggling for funds (and no doubt, inspiration). And that is why Juventus now play in black and white stripes, the same black and white stripes John has been supporting for 150 years or however old he is, and also why whenever he is on the terraces, and Notts manage to pass to someone else wearing those same black and white stripes, he sings loud and proud with everyone else: “It’s like watching Juve!”

So, many happy returns John. The City, the football team, all of Italian culture and especially, all of your mates, love you and admire you. Keep putting it out there. It’s never easy and you never shirk.