Ben Norris : On the Sliproad to Glory 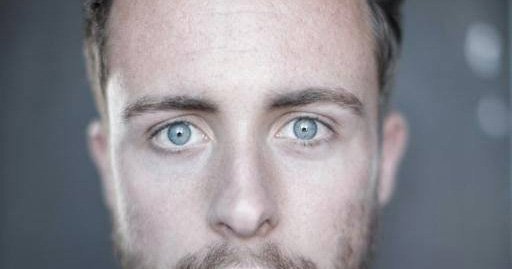 Ben Norris arrives at the Nottingham UNESCO City of Literature office laden with plastic bags “I’m so sorry” he explains “My rucksack just broke and I’ve had to improvise”. Well, that rucksack has served him well in the past, strapped to his back as he thumbed his way down to the South end of the M1 on a journey to find his dad: not literally ( Norris pater familias lives in Lincolnshire) but the essence of his dad, a distant, quiet man in contrast to Ben’s open, friendly, arty persona.

Hitchhiker’s Guide to the Family

The Hitchhiker’s Guide to the Family is an account of this journey. Starting from his childhood home in Nottingham, he hitched lifts down to Wembley Stadium (the old one, with the towers, long demolished) via key points in his dad’s life – handily, his father had always moved North up the M1 corridor during his life – in attempt to find what made this taciturn man tick. How could they be such different characters?

When the show calls for him to hug an audience member –a total stranger- for a good 20 seconds, it feels perfectly part of the show, rather than an excruciating experience

The story is told as an epic poem

Performed by Ben with a variety of props, projected film and animation, it’s an energetic, imaginative show; which deftly walks a type-rope above schmaltz aided by his self-deprecatory wit; and when the show calls for him to hug an audience member –a total stranger-  for a good 20 seconds, it feels perfectly part of the show, rather than an excruciating experience. Moments like this make the show special: and with this being a home-coming gig, having his family (sans father) in the audience gives it an extra edge. Relating an anecdote on your mum walking in on you as you lose your virginity is one thing, doing it to an audience which includes said mother- and other senior relatives- is another.

The production received dramaturgic support from Phoebe Waller-Bridge, whose one-woman show Fleabag was developed for TV and was ravenously received on broadcast: emotionally eviscerating, terrifyingly raw and, above all, very funny. There is great crossover in Ben’s work: the willingness to open oneself up and stare inside.

When he visits us with the aforementioned collection of supermarket bags clasped in hand, it’s for a chat about Nottingham and why we are unique. Although now domiciled in North London for work purposes, he is thoroughly Nottingham, with not a shred of London tone seeping into his accent. His passion for the city is evident; he talks avidly about how the streets are full of words, how we have a unique vernacular which is richly poetic, as well as often mystifying to the non-Nottingham. Has his dad seen the show? “Yes, he came to Edinburgh to see it”. What did he think of it? “He said “Well done, son”. Which was good enough for me. He’s decided he wants to see it again, in Lincoln. So I think he likes it”.

Eventually, time catches up with him and he heads out to return to London. Thumb out on the ring-road again? “No, I’ve got a train I’m afraid. I’m spending this tour pretending to hitch most nights, so I don’t feel too bad about it”. And with that, Ben Norris, one of Nottingham’s finest and fastest young talents, heads South.