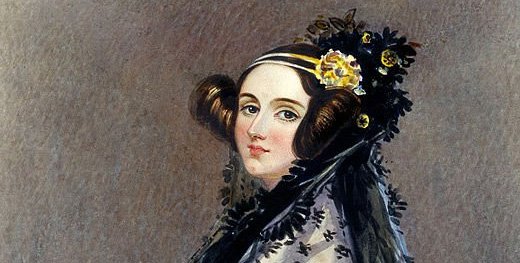 If you’ve heard of Ada Lovelace, you’ve probably heard the same basic description that I had back when I started researching her in 2014: that she was the first computer programmer, and that she was the only legitimate heir to Lord Byron.

And whilst I don’t disagree that these are important touchstones in Lovelace’s story, there’s obviously a lot more to it – and to her. So who was she? What did she do? And in particular – why should Nottingham care?

Because if you’ll allow a Derby local’s opinion on the matter, I think it’s only fair to claim Ada Lovelace for Nottingham. But to do that, we’ll have to start with Byron.

To be clear, Ada had no memories of her father. Her mother, Lady Annabella Byron, ended her marriage to Byron amid rumours of violence and incest, when Ada was still only a few months old. Byron left England for good shortly afterwards, and died in Greece when Ada was eight, having had no further relationship with his daughter.

But despite Byron’s lack of involvement as a parent, Ada’s upbringing was overshadowed by the anxiety that she would turn out like him: mad, bad, and dangerous to know. This fear naturally came from her mother, who constantly struggled following ‘The Separation’ to reinforce that she had been right to walk away from her husband and take sole custody of her child (when at the time, custody was legally granted to fathers). Lady Byron was keen that Victorian society would not forget Byron’s immorality, and she was determined that her daughter would not repeat it.

Both Lady Byron and Ada herself believed strongly that a continued training in mathematics would help to keep the more dangerous Byronic urges at bay. But it’s a myth that, to counteract the inheritance of poetry, young Ada was strictly educated in only mathematics. She showed great curiosity in dozens of subjects and ideas throughout her life: from a childhood treatise on flight (human and otherwise) called Flyology, to an unprofitable adult fixation on horseracing. She was also a talented musician, particularly in the harp and the piano, and dabbled in studying phrenology, mesmerism, and electricity.

But it was not until her late twenties that Ada became fascinated with the machine that changed how we think of her today – Charles Babbage’s Analytical Engine. After reading her translation of a somewhat dry paper about the mechanics of the Engine, Babbage invited Lovelace to expand her work. Lovelace jumped at the opportunity, and the following collaboration between the two of them led her to write her famous ‘Notes on the Translation’, which ended up longer than the original paper itself. It’s in Note G that Lovelace tabulates instructions for the Analytical Engine which are now referred to as ‘the first computer programme’ – for a computer which hadn’t even been built!

In my favourite part of the ‘Notes’, she explains that the Engine…

…might act upon other things besides number… Supposing, for instance, that the fundamental relations of pitched sounds in the science of harmony and of musical composition were susceptible of such expression and adaptations, the engine might compose elaborate and scientific pieces of music of any degree of complexity or extent.

What Lovelace is illustrating here is the difference between a computer and a calculator. A calculator, well, calculates – adds, subtracts, multiplies – whereas a computer works in symbols and codes which can represent anything, not just numbers and functions. If you give a computer the right input, that computer can compose a piece of music.

This is why Lovelace deserves to be lauded as a visionary. She saw a future where computers would only be limited by what we could imagine them doing. And although this seems simple to us now, her ideas were radical at the time, and certainly far beyond what Babbage himself anticipated for his invention.

Lovelace’s theories on the Engine feel like a synthesis of mathematics with imagination, the technology of the industrial age with the romantic poetry of her heritage. And her famous claim to ‘poetical science’ is especially relevant now with the growth of the STEAM movement, which aims to re-unite Science, Technology, Engineering, and Mathematics with that missing link: Art.

Since we seem to be heading back, once more, to Byron, let’s look at why it seems right that Nottingham should be staking a firm claim on his daughter too.

The Byron ancestral home is Newstead Abbey in Hucknall, Nottinghamshire – or it would have been had Byron not been forced to sell it to offset his mounting debts, something which he greatly resented doing. After his death, his legacy of immoral behaviour meant he was refused burial in Westminster Abbey, and taken back to Newstead to be interred in the family crypt.

Lovelace visited Newstead Abbey for the first and only time in 1850 as a guest of the new owner, Colonel Thomas Wildman, and felt conflicted and emotional about her stay there. She was proud to see the Byron legacy celebrated in Wildman’s extensive restoration work, but she also felt ‘horribly low and melancholy’, as if ‘it ought to belong to me’. By the end of her visit however, she was determined to return again, and reflected on her sense of belonging:

…there is an old prophecy that the place was to pass out of the family when it did, and which further adds that it is to come back in the present generation!

Ill throughout her life, and increasingly so even during her stay at Newstead, Lovelace died two years later at the age of 36 – the same age as her father. And in a late conversation with her husband, Lovelace made it clear that Newstead Abbey was to be her final resting place, where she would be buried alongside her father. Her stay in what she described as ‘the Mausoleum of my race’ had deeply moved her, and she felt a powerful reconnection to her history.

These days, there are only a few reminders of Ada Lovelace’s connection to this county. Newstead Abbey itself is the most prominent, of course, and she also has a tram named after her that runs in Nottingham city centre.

But it would be an easy thing to choose her as a figurehead – after all, she chose Nottingham – and it seems only right to do it. Considering Nottingham’s growing status as a hub of culture and the arts, alongside its heritage as a hot-spot of industry and technology – Ada Lovelace, poetical scientist, definitely seems like a natural fit.

Emily Holyoake is a dramaturg and playwright working from Nottingham Playhouse whose play ‘Ada’ tours in Spring 2019: https://emilyholyoake.com/ , @princecolin