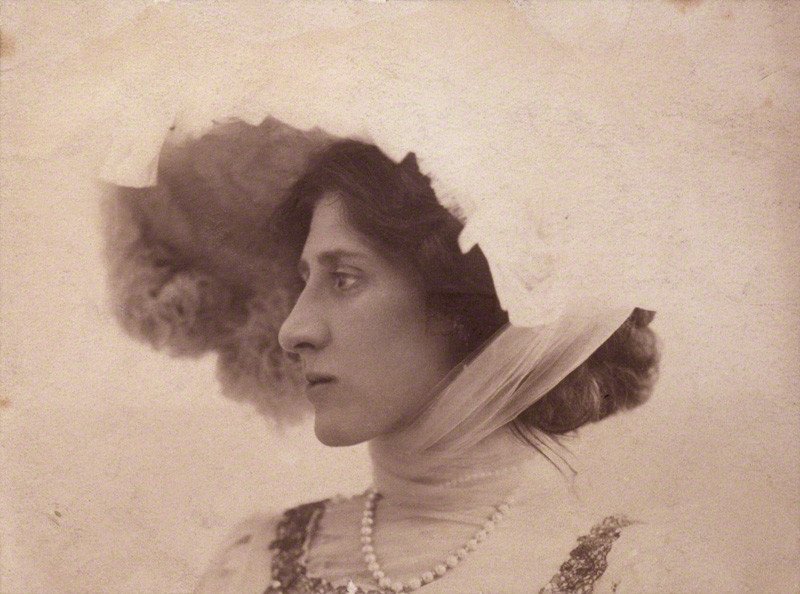 ‘Many people are interested in others in a superficial way’, wrote the literary hostess, patron of the arts, and memoirist, Lady Ottoline Morrell (1873-1938), ‘but [D. H. Lawrence’s] interest would penetrate and lay hands on his object, breaking down barriers’.

Yet a reader fresh to Ottoline’s memoirs is likely to sense that Ottoline herself was pretty good at shaving off the superficial layers of human relationships to see what was really going on beneath. Maybe it was her associations with Nottingham-born writer Lawrence that encouraged her to take a deep interest in other people. As Tony Simpson hinted in his lecture (May 10) at Bromley House, Ottoline herself excelled at the art of understanding people and developing friendships with them.

And so in his talk on Ottoline’s friendship with Lawrence, her relationship with Russell, and the friendship between the two men, Tony Simpson moved beyond what we probably already knew about these famous figures who lived and moved a century ago. He laid hold of this tangled trio and began to pick at the threads that bound them together.

For Ottoline – as readers of Miranda Seymour’s authoritative biography, Life on the Grand Scale (Faber Find, 2008), will recognise – it was her need to help others, particularly artists and thinkers, that influenced her decision to introduce Russell to Lawrence. Russell was deeply impressed by Lawrence; the warmth which Ottoline felt radiated from Lawrence was also appreciated by Russell. And yet for Lawrence, Russell’s fine mind worked in such a way that at times it was just a little too searching for Lawrence’s impulsive, fiery inspiration.

For example, Lawrence’s interest in ‘blood consciousness’ – not an entirely novel idea in the early twentieth century – struck Russell as frankly silly. For Lawrence, on the other hand, Russell’s connection to Cambridge University soiled his association, for Cambridge represented all that was sterile to Lawrence. Cambridge men couldn’t be placed in Lawrence’s utopian Rananim.

On the other hand, Ottoline could: Lawrence urged her to preside over his utopia and to be Cassandra, uttering inspired words that people would believe. Lawrence was partly inspired by Ottoline’s country retreat, Garsington Manor in Oxfordshire, to which Ottoline and her family moved in 1915 in part to escape the constant reminder of war in London. As Tony recalled, at Garsington Ottoline gathered together an extraordinarily wide variety of people to whom she gave hospitality, and often in straitened financial circumstances.

Garsington was a world-away from the ‘smart world’ which her childhood Nottinghamshire home of Welbeck Abbey represented. Gone were the hunting, fishing, and shooting – the endless talk about what clothes to wear and whether or not Lady Rutland takes a bath; ‘I didn’t open my mouth for fear of saying that I only have one bath a day’, Ottoline confessed in 1925.

An avid photographer, Ottoline snapped her way through these populous years as much as she wrote. Retreating into her boudoir, the journal and the photo album became part of her means of expression; they remain significant in her legacy to this day, and are now housed in The British Library and online via the National Portrait Gallery.

Of course, while Tony’s talk penetrated beneath the surface of these big names – Bertrand Russell, D. H. Lawrence, and Ottoline Morrell – he was right to recognise that Ottoline in particular deserves to be understood better, and not just in an academic sense. For although she was an aristocrat, a hostess, and a patron of the arts who knew and befriended countless big names of the early twentieth century cultural scene in Britain, she was also a woman who desperately sought to be understood and loved by sympathetic personalities. The isolation she felt in the imperious Welbeck left its mark. In adulthood, she wanted to reach out to others, and she continues to reach out today through her writing and photographs.

Richard is a British-Romanian thinker who has written on topics of identity, ethnicity, and religion for platforms such as Contributors.ro, FiSch (Faith in Scholarship), The Balkanist, and Post Pravda (forthcoming). He is nearing the completion of his PhD in Literary Theory, and has a forthcoming scholarly article, ‘Ottoline Morrell: Personalist Thinker’ in The Modern Language Review.