A story that needed to be told: Christine Bridges and ‘POW on the Sumatra Railway’ 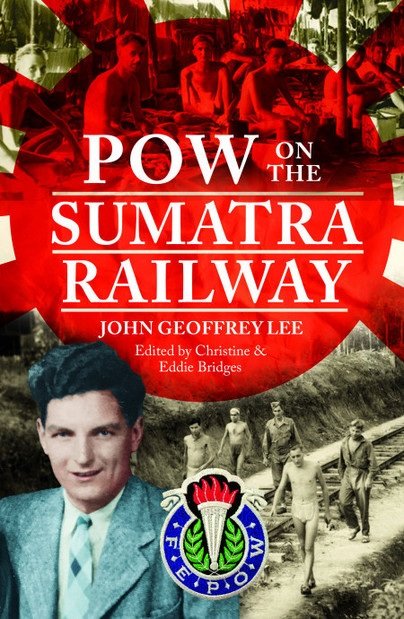 My name is Christine Bridges, and I was born in Nottingham in the 1950’s. My mum Betty, dad Geoff, brother Derek and I lived in a terraced house in New Basford. As with all other houses around us there was no bathroom, heating or hot water and the toilet was at the top of the garden. Mum and Dad worked very hard clearing out houses and doing up furniture to sell on Sneinton Market to provide for us and put food on the table. Dad had bouts of illness when he would stay in bed for days and we were not to bother him. I later found out that this was malaria. He also suffered from a bad back and again he was bed bound laying on a board for weeks on end. There were no handouts in those days, so they had to keep on working.

Later in the 1970’s, I found out why my dad was often ill, and it was because he had been a Prisoner of War in WW2 for three and a half years. Yet he never spoke about it. However, Dad did start to speak to my husband, Eddie about his horrific time as a POW. He finished up as a slave on the Sumatra Railway for over a year, in the most awful conditions with many people dying of tropical diseases, malnutrition and cruelty meted out by the guards. No one believed that he had built a railway in Sumatra and after so many years of keeping quiet, he set out to prove that he was right.

John Geoffrey Lee (always known as Geoff) was born in Clifton Village and lived in Nottingham all his life. He joined the RAF on his 20th birthday in June 1941 and left Liverpool on a troop ship in December 1941, with no idea where he was going. He eventually arrived in Java in March 1942, where he was captured by the Japanese, along with many others. He miraculously survived many prison camps and hell ships and weighed just 6 stone when he arrived back in Liverpool in December 1945. After his release he found he had difficulty in convincing people where he had been as no one had heard of the “Sumatra Railway”, only the other one, three thousand miles away in Burma. So, he kept quiet. Even in the 1980’s letters to newspapers were returned as ‘Just another Burma Railway story’. The Ministry of Defence, Commonwealth War Graves Commission, and The Imperial War Museum had no records of POW’s building a railway in Sumatra.

So, began his journey, his aim… to prove to the establishment what he already knew to be true. This is my dad’s story of his captivity, release, and subsequent efforts in achieving his aim. It also involved many years of research and eventually finding other Far East Prisoners of War around the world

In the 1990’s he wrote a book with two fingers on a typewriter, it took him five years, but he was unable to get it published, again it was associated with the Burma railway. Sadly, my dad died in 2002 aged 80 years. I promised my dad before he passed away that I would get his book published. I am very proud to say that I submitted it to Pen and Sword two years ago, and it was published on 30th June 2022, twenty years after he died.

‘POW on the Sumatra Railway’ is a lasting testimony to a story that needed to be told and is available from Pen and Sword and all good book sellers.