At the age of 15 Joan Easdale sent poems to Virginia Woolf who published her work in two volumes, declaring her “my discovery”. They became friends and Joan joined London’s intellectual elite The Bloomsbury Group. Her ‘A Collection of Poems’ was described as “astonishingly adroit, acute, accomplished”; but it’s not for her poetry that Joan’s been selected for a series on social justice, it’s for her rebel spirit.

Combining writing with home life Joan wrote plays and talks for the BBC but her mental health was failing. The pressures of work and family, and fear of being blown up during the Blitz, made life unmanageable and she sought psychiatric advice. This insisted she cease writing and burn all her work on a bonfire.

After a breakdown, in which Joan became convinced there were spies in the roof, she left her family and entered Holloway Sanitorium where she was diagnosed with schizophrenia. Later discharging herself, Joan jumped on a train and got off at Nottingham, where she reinvented herself as Sophie Curly.

For nearly thirty years she bounced around the city centre, from park benches to flats and pubs, ranting about Maggie Thatcher and the rich. She believed the Tories to be corrupt and uncaring.

Sophie was on the side of the poor and the elderly, and she rallied against consumerism. A campaigner for the Labour Party, she also objected to services that weren’t run by the council. Despite her troubles with mental illness and alcohol she remained a reader, ordering books from the library. And she continued to write: ‘Bring me a pen if you like because one can’t have too many in this flat.’ Sophie was a social outcast and lover of the people. 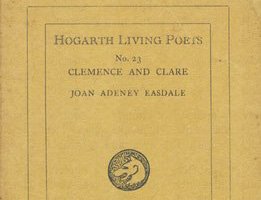 Three Joan Pens: A Collection of Poems by Joan Easdale