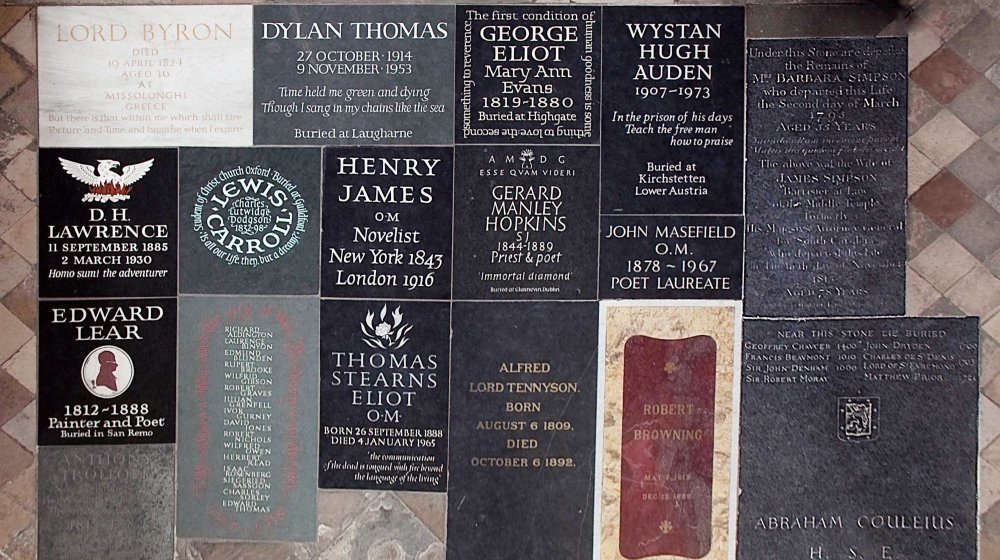 Michael Cullen, a rogue from the streets of working-class Nottingham, returns in the pages of Life Goes On. Previously seen in A Start In Life (1970), Cullen, a former gold-smuggler, discovers that his old boss’s memoirs are being ghosted by his own randy father. That boss is Claude Moggerhanger, now an eminent peer, supplying the Soviet Union with heroin. Moggerhanger makes Cullen an offer he can’t refuse and adventure ensues. Cullen ducks and dives as he drives around England unable to stay on the straight and narrow. A hard-boiled womaniser with a caring side Cullen is good fun.

I, Michael Cullen, King Bastard the First, dodged the traffic like a London pigeon in its prime. (from Life Goes On)

It was in 1985 that a memorial stone to D H Lawrence was unveiled in Poets’ Corner at Westminster Abbey, to mark the centenary of the great writer’s birth. The black granite stone, designed by David Parsley, features a phoenix arising from a log fire. The stone adjoins memorials to Lord Byron, Edward Lear and Lewis Carroll. Nottingham Playhouse marked Lawrence’s centenary with a performance of Phoenix Rising, written by Nottingham’s Campbell Kay. Set in France in 1928 Phoenix Rising has an ill Lawrence reminiscing about his early life.

The experimental poet Alan Baker moved to Nottingham in 1985 and has lived here ever since. Baker has been the editor of the poetry publisher Leafe Press since 2000, and he’s the editor of the online magazine Litter.

Julia Casterton was born in Nottingham. A studious head girl at Arnold County High School she went on to become a prize-winning poet and published novelist, and was known to provide much-in-demand writing workshops. A great believer in the therapeutic value of writing poetry and fiction, Casterton focused on encouragement and participation. With advice on how to get published, Creative Writing was her written practical guide, providing advice on style and form, with help on developing work to be read or heard. Drawing on interviews with other writers, and the author’s own experience as a poet and tutor, Casterton attends to many forms including autobiography, poetry, dialogue, short stories and writing for the screen.

The myth of the ‘natural’ writer, who spins vast, architectural webs of vast exalted verse or prose is a treacherous lie which many writers have done their best to rub out, only to watch it appear again, healthy as ever, in literary columns, popular films about literary ‘giants’, even in the biographies of writers. (from Creative Writing)

It was in 1985 that Stephen Booth arrived in Nottinghamshire. The former newspaper and magazine journalist still lives here, near Retford, in a Georgian dower house. By the end of the last century Booth was creating his crime-fighting duo DC Ben Cooper and DS Diane Fry, the stars of his 18 book (and counting) series mostly set in Derbyshire’s atmospheric Peak District.

The current Sheriff of Nottingham, Catharine Arnold, is better-known for her non-fiction but in 1987 she won The Betty Trask Prize for Lost Time, an award for first novels written by authors under the age of 35. In the story, Miles Tattershall is a shy, thirty-three-year-old professor at Cambridge. A virgin, he is first seduced by Benjamin Underwood, a student, and then by Olivia, Benjamin’s sinister sister. The action moves to Manhattan where Miles’ own sister Francesca is on tour as a concert pianist.

Subtle and graceful, this first novel treats blooming sexuality and the growth of love with a sensitivity untinged by sentiment. (Publishers Weekly review of Lost Time)

It was in 1987 that the Nottingham Writers’ Club began its long association with The Nottingham Mechanics, first moving into the card room at Birbeck House in Trinity Square, and later relocating to their current meeting place on North Sherwood Street.