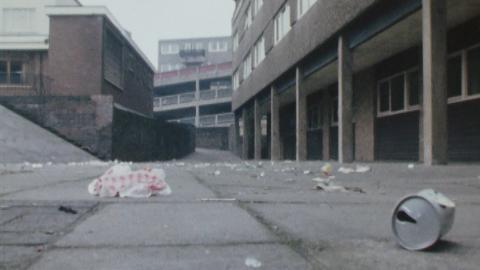 The Winter of the Birds by Helen Cresswell (1976)

Of the fifty-plus published stories written by Nottinghamshire’s Helen Cresswell, The Winter of the Birds is believed to have been her personal favourite. It’s a humorous tale with elements of the gothic and sci-fi genres. A young boy called Edward, wanting to become a hero, seizes upon an old man’s terrifying vision of birds. Edward’s hopes to save the day now seem to depend on these ‘terrible and purposeful’ steel birds that come in the night. As he teams up with his senior accomplice, Edward discovers the nature of true heroism.

It was in this year that Stephen Lowe became Stephen Lowe. The playwright took his mother’s family name as his professional identity on joining Alan Ayckbourn’s company as an actor and assistant manager. His true surname is Wright but to Stephen it “seemed a boring common name and I felt I clearly should have been called something more exotic.”

Richard Eyre, Artistic Director at the Nottingham Playhouse, commissioned Stephen Lowe to write a new play. That play was Touched and a year later it would win a George Devine award.

Daughter of Darkness by Miranda Seymour (1977)

One of Nottinghamshire greatest biographers, Miranda Seymour, began her writing career with several works of fiction, including Daughter of Darkness. It’s history at its most colourful. Murder and treachery have always clung to the name of Borgia, thanks to the scandalous rumours recorded by the chroniclers of the times. Their infamy has rubbed off on to those associated with them: Machiavelli’s admiration for Cesare still blots his own reputation, and Guilia Farnese, the Pope’s mistress, was nicknamed ‘The Bride of Christ’ by her contemporaries. Lucrezia, the willing victim of her ambitious and incestuous family, has been remembered as a debauched Salome.

Roy Catchpole absconded from borstal and became a thief. His life later changed for the better after he read an Agatha Christie novel. This sparked a love of reading that led him to the works of Shakespeare and, most significantly, the bible. Sporting stolen clobber, Catchpole turned himself in and spent the next 21 months in prison where he studied to enter the clergy. In 1977 he became the new minister at St. Paul’s in Hyson Green.

Halfway through the video (below) you can watch Roy talk about the area and its people.

Two Brothers was one of the novels for which Stanley Middleton was most proud to have written. The brothers concerned are a quiet schoolmaster come poet, a man of curiosity and contemplation, and a culturally poorer, capitalistic businessman.

Provincial. Limitation of subject matter. Some flatness of language. Absence of the larger gestures. Awkwardness. But. But. But. Characterised by a deep sincerity, a single eye, an attachment to reality, a love of humanity and the townscapes of his Midland home… Poet of the Prosaic. (The poet Potter’s mock obituary of himself from Two Brothers)

In 1978 Frank Palmer was named Reporter of the Year at the British Press Awards for his scoop on the year’s most sensational trial ‘the sex-in-chains case’ involving Joyce McKinney, kidnapper of a Mormon missionary with whom she was obsessed.

Palmer had previously achieved the rare feat of writing the front and back page leads for the Daily Express on the same day, this followed his interview with Matt Busby after the Munich Air disaster.

“He taught young journalists like me everything about good, old-fashioned journalism,” said Alastair Campbell of Frank Palmer. Campbell had worked with Palmer on the Daily Mirror.