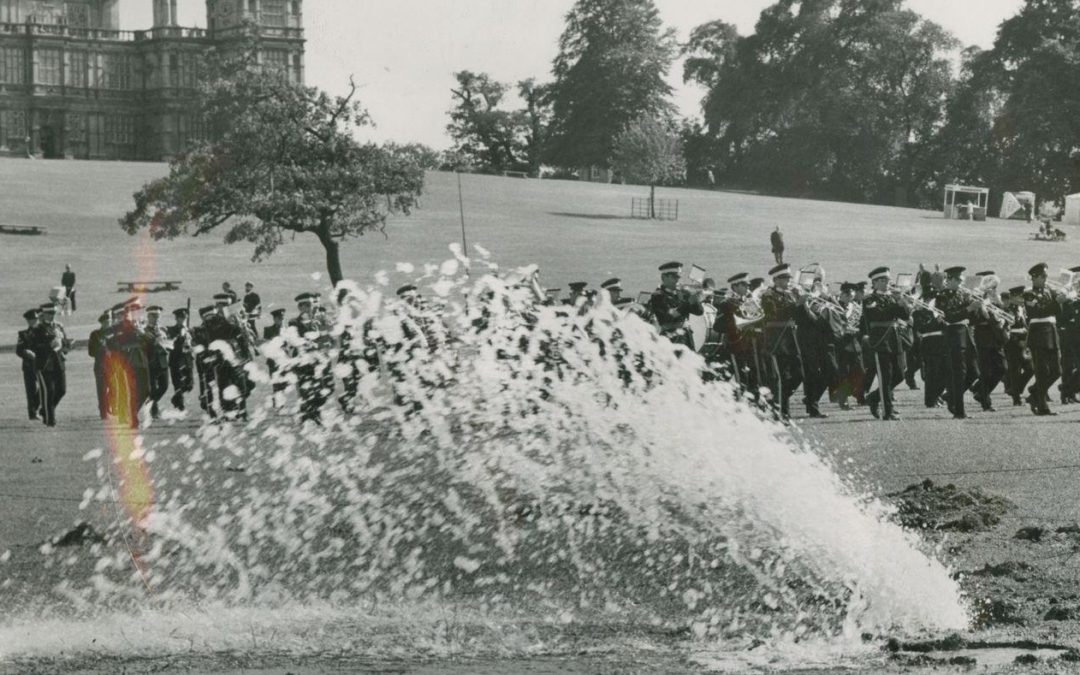 Nottingham: A Biography by Geoffrey Trease (1970)

Nottingham born and bred Geoffrey Trease was one of our most prolific authors and an ideal narrator for the story of our city. The industry, the rebellion, the famous sons and daughters, it’s all here and told with all the readability Trease was known for. In addition to being one of the best books about Nottingham it contains plenty of local literary references.

You either look back in anger or you write con amore. Amore always came more naturally to me. (from Nottingham: A Biography)

Launching in 1970 the Nottingham Festival brought a range of events to the city, including a balloon race, a motorbike display team and a ‘mock battle’ which accidently blew up a water main. The large and costly summer festival took place every year until 1983 inclusive, providing arts and entertainment, and attracting many stars of music and screen to Nottingham in an effort to demonstrate our cultural and commercial dynamism.

Organisers of the 1970 festival called for real-life Robin Hoods to come over as VIP guests. They received more than 100 letters, one of which was from a four-year-old American girl whose parents had named Robin Hood in an effort to help her become popular and outgoing.

Travels in Nihilon by Alan Sillitoe (1971)

Alan Sillitoe’s satirical novel is about a country founded on nihilism where honesty is outlawed and news is preceded by the statement ‘Here are the lies!’ Five writers/researchers are dispatched to Nihilon to compile a guidebook. Their attempts to gather information are thwarted by a disorienting environment in which nothing can be trusted. In a strange dystopian world of enforced anarchy, a revolt takes place only to result in a similar system of organised chaos. It’s a society founded on greed, selfishness and threat, and the setting for Sillitoe’s dark comedy handled with a light touch, in which war is fought by older people who have less to lose.

Across the road, painted along one of the white buildings, and intended mainly for tourists leaving the country, was the cryptic but worrying legend: SELF-EXPRESSION PLUS SELF-INDULGENCE EQUALS NIHILISM. SIGNED: PRESIDENT NIL. (from Travels in Nihilon)

The year witness the end of the impressive Gaumont Cinema which closed after 23 years. Before that it had been the Hippodrome Variety Theatre, built in 1908 as a music hall. The three-floored building was a 2,500-seater on Wollaton Street/Goldsmith Street. The grand old building has since been demolished.

Middleton’s 1972 novel Cold Gradations began a key period of output for the prolific author according to Paul Binding, the novelist, critic, poet and cultural historian. This novel was also highlighted by Philip Davis as one of Middleton’s ‘major works’. The protagonist of Cold Gradations is a retired schoolmaster. The book’s ending is heart-breaking.

I assume the title comes from Samuel Johnson’s poem On the Death of Dr. Robert Levet which ends thus:

Then with no throbbing fiery pain,

No cold gradations of decay,

Death broke at once the vital chain,

And freed his soul the nearest way.

He was an elderly pedagogue, who’d taught history and literature and Latin, who had now paid the penalty for his bias. (from Cold Gradations)

1972 was a year of openings: A superb D. H. Lawrence exhibition opened at Nottingham Castle’s Museum. Costing over £6,000 it featured a collection of documents, photographs, paintings, sketches, objects and other material from Lawrence’s early years in Eastwood, Nottingham, Croydon and elsewhere, taking us from his earliest recorded childhood to the First World War. His paintings took centre stage.

The formal opening of the Victoria Shopping Centre took place. The Viccy Centre housed the Victoria Centre Market – and still does – which had a book-stall that survives to this day in the form of Mary and Tony’s. Mary is the daughter of the original store owner.

Mushroom Bookshop opened on Arkwright Street in 1972. Anarchistic and independent the store later moved to Heathcote Street where it survived until 2000. In 1994 the shop was attacked by fifty fascists.