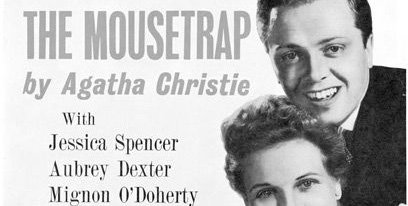 Between 1933 and 1958 Katharine ‘Mollie’ Morris published five novels set in Nottinghamshire villages. Nottingham born Katharine Morris moved to a small country house in Bleasby and by the age of twenty-three had written the first of her gentle stories of life in the English countryside. Morris became involved in PEN during the 1930s, the human rights organisation originally for ‘Poets, Essayists and Novelists’, and by the ‘50s she was at her most productive. The Vixen’s Cub was published by Macdonald of London.

He no longer saw the tree or the water, only this woman who was his mother. (from The Vixen’s Cub)

In 1951 a short story called Mountain Jungle won a prize at the Nottingham Writers’ Club. The author was a 21-year-old Alan Sillitoe.

The Gentle Falcon is a fictionalised biography of the child bride who married Richard II. Narrated by young Isabella Clinton, a close companion of the Queen, the book was published by Oxford University Press in 1952 and adapted for television two years later with Glen Alyn as the adult Isabella and Victoria Nolan playing her as a child. Hilda Lewis’ historical novel had special appeal to younger readers. There are excellent illustrations throughout from fellow Nottinghamian and renowned artist Evelyn Gibbs creator of the Midlands Group of Artists.

Some men brought home gold from the wars and some fine jewels, my father used to say, but he brought back the rarest jewel of them all – his bride. (from The Gentle Falcon)

It was in 1952 that Agatha Christie attended the opening of what would become the longest running theatrical production. Christie’s The Mousetrap was performed for the first time in Nottingham’s Theatre Royal. The first Detective Sergeant Trotter was played by a young Richard Attenborough. The production opened here because Nottingham was regarded as a lucky city to launch new plays.

Duncan Gray, a local librarian between 1935-1953, traces the history of Nottingham from the Anglo-Saxon settlement, on the site of the Lace Market, to the modern city of the mid-twentieth century. Detailed and well-illustrated, Nottingham Settlement to City is a companion volume to Gray’s Nottingham through 500 years.

We do not know anything about Mr. Snot excepting that he gave his name to the earlier form of Nottingham, which was Snotingaham – the Ham or Home of the people of Snot. (from Nottingham Settlement to City)

There was a major exhibition in Nottingham in 1953. Independent television companies arrived here with their ideas to pitch and pilot new shows. Held at Nottingham’s Albert Hall, the mostly light performances featured celebrities who also gave interviews. One of the game shows piloted set out to find the most happily married couple in Nottingham, with Eamonn Andrews as the host.