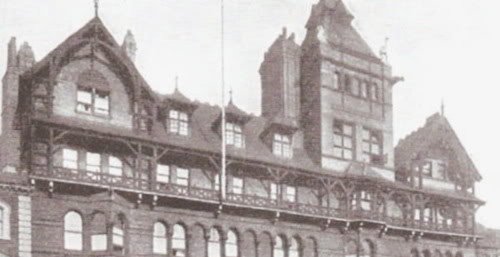 A Princess Comes to Our Town by Rose Fyleman (1927)

In this Nottingham fairy-tale, The Fairy King and Queen have chosen the man they want their daughter to marry, but Princess Finestra doesn’t want the prince, not yet anyway, life would be far too boring, she wants to have real adventures first. To that end, the princess’ godmother has her transported to real-life Nottingham’s Market-place. Many adventures ensue including the bringing to life of our (then) statue of Queen Victoria.

It was in 1927 that the Nottingham Writers’ Club was founded at a meeting at the Black Boy Hotel in Long Row. The grand hotel has been replaced by what’s now a less grand Primark but the writers’ club is still going strong. Among the founding members was the published writer Arthur E. Ashley, who wrote under the pen name Francis Vivian, author of the Brother Ignatius and Inspector Knollis series’. It’s well-known former members include Alan Sillitoe (born a year after the club opened) and Helen Cresswell.

Cecil Roberts’ novel Goose Fair was first published in the USA in 1928 (also published in England as David and Diana, after the main characters).

Every first Thursday in October, following the custom of centuries, the good people of the city whose Sheriff was so soundly abused by Robin Hood, take leave of their senses. (From Goose Fair)

D. H. Lawrence’s Lady Chatterley’s Lover was privately published in Florence in 1928. The last of his full-length novels it was famously banned in the UK for more than 30 years due its sexually explicit nature and profane language. The history of its many publications became befitting of a plot in itself.

The year also witnessed the birth of Alan Sillitoe, “…in the front bedroom of a red-bricked council house on the outskirts of Nottingham.” Alan was the second of five children all growing up in poverty. He failed his eleven-plus twice and gained much education from reading books whilst recovering from TB with the RAF in Malaya. One of Nottingham’s greatest authors, Sillitoe is best remembered for his first two books. He was, however, a prolific writer who remained committed to political causes and social justice throughout his life.

By Dancing Streams by Douglas McCraith (1929)

Sir Douglas McCraith was appointed a Justice of the Peace in 1928 and President of the Nottingham Incorporated Law Society in 1930. He later served as Chairman of the Lord Chancellor’s Advisory Committee for Nottingham and was Chairman of the Nottingham Bench. In 1929 he published the novel By Dancing Streams, which was followed by Dancing Streams in Many Lands in 1946 (published by Bromley Press). McCraith was born in Nottingham on New Year’s Day 1878. The solicitor, Conservative politician and sportsperson, was educated at Harrow and Cambridge.

Sapper’s character Bulldog Drummond, a World War I veteran who advertised for excitement and adventure, came to Nottingham in 1929. The stage version of Bulldog Drummond played at the Theatre Royal, with the Irish actor Hamilton Deane in the title role. Deane is famous for adapting Bram Stoker’s Dracula for the stage, re-imagining the Count as someone that could plausibly enter society and coming up with the idea of his tuxedo, stand-up collar and flowing cape.