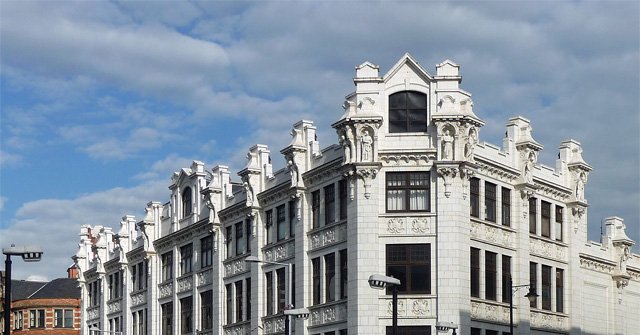 An Etymological Dictionary of Modern English by Ernest Weekley (1921)

Ernest Weekley (see 1912-14) had a dictionary published in this year. It was published for lovers of our language and those with ‘an intelligent curiosity as to words origins and earlier senses.’ From the point of view of vocabulary, it was the most complete etymological dictionary in existence. By the author’s own concession, dictionaries are out of date within a month of publication but with many slang words and expressions historically explained it’s a worthy addition to any bookshelf.

One of our grandest cinemas opened in 1921, The Elite Cinema, designed by Adamson & Kinns of London. It opened with the Mary Pickford film Pollyanna. One of the first of Nottingham’s ‘super-cinemas’ the exterior and interior were equally as stunning, plus there was a grand concert organ and a full orchestra, a Georgian Tea Room, a French Cafe (in Louis XVI style), a restaurant and a large ballroom. The first ‘talkie’ in Nottingham was shown here on Upper Parliament Street, Lucky Boy starring George Jessel. It closed as a picture house in 1977; the last film to appear being the ‘X’ certificate Take an Easy Ride. The building now has a Grade II listing.

The Rainbow Cat and Other Stories by Rose Fyleman (1922)

The story of a fairy cat with a violet nose, indigo eyes, pale blue ears, green front legs, a yellow body, orange black legs and a red tail, thus it is known as the rainbow cat and it lives in fairyland where it has lots of adventures. The Princess Who Could Not Cry, Why Pigs Have Curly Tails, Mellidora, A Goblin Lives in Our House and other short stories make up this fantasy collection for children.

In 1922 work began on the new University College buildings (the University of Nottingham’s present University Park campus) on land donated by Sir Jesse Boot who had purchased the Highfields Estate two years earlier. The plan for the East Midlands University included a new road system and parkland setting to the south.

Lawrence wrote the first draft of Kangaroo in 1922, during forty-five days of living near Sydney, and it was first published a year later. Set in Australia, the work describes the country’s physical landscape, making political reflections and interpretations. Loosely based on the real people and events Lawrence witnessed, it’s mainly an account of a visit to New South Wales by the English writer Richard Lovat Somers and his German wife Harriet. ‘Kangaroo’ is the fictional nickname of the character Benjamin Cooley, ex-soldier, lawyer and leader of a secretive, fascist organisation.

Highfields Park opened in 1923. The Grade II listed park was opened by businessman and philanthropist Sir Jesse Boot and was one of the first manmade, large-scale parks of the 20th century. Later in the decade, after the University had moved to its current University Park campus, D. H. Lawrence wrote a somewhat sardonic poem entitled Nottingham’s New University to ‘commemorate’ the occasion.