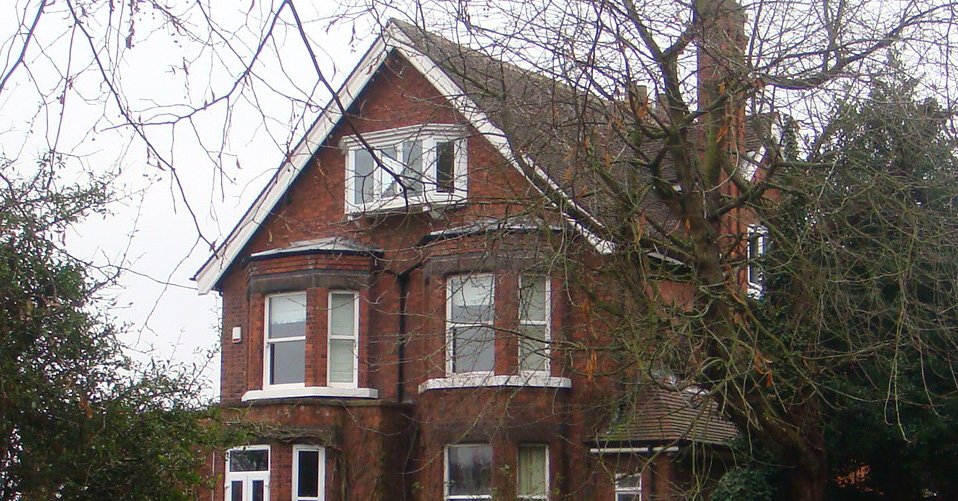 The second novel from D. H. Lawrence was published in this year. Originally entitled The Saga of Siegmund it drew upon the experiences of a friend of Lawrence’s, Helen Corke, and her adulterous relationship with her violin teacher that ended with his suicide. After reading Miss Corke’s diary Lawrence urged her to write her story before receiving her permission to do so himself. Lawrence also urged Corke to publish her diary, which she did in 1933 as Neutral Ground. She also wrote several biographical works on Lawrence.

Feeling him abstract, withdrawn from her, Helena experienced the dread of losing him. She was in his arms, but his spirit ignored her. (from The Trespasser)

In 1912 D. H. Lawrence visited the home of Professor Ernest Weekley at a property on Victoria Crescent (pictured below) in Mapperley Park. He sought advice from his former lecturer about becoming a language instructor in a Greek university. Lawrence was greeted by Emma Maria Frieda Johanna Weekley whose husband was not home. The 33-year-old impressed Lawrence with her beauty and her foreignness. He was also drawn to her spontaneity, carelessness and directness; traits in evidence if, as rumour has it, they quickly ended up in bed together. Extramarital liaisons were not new to Frieda and she met Lawrence several times over the next few weeks. Lawrence was hooked on her, writing that she was the ‘most wonderful woman in all England’ and insisting that she was throwing away her life. Within a month they had eloped, Frieda leaving behind her comfortable existence and three children. She may have been the daughter of minor German aristocrats but she was not wealthy, and her family were totally opposed to her abandoning her marriage and children for the love of a penniless writer. Lawrence insisted that she tell her husband about them but she repeatedly failed to do so. It was Lawrence who wrote to Weekley, declaring: ‘I love your wife and she loves me …’. Weekley divorced her and in 1914 she married Lawrence.

‘I tell you I’ve written a great book,’ said Lawrence to his publisher on sending a manuscript of Sons and Lovers, adding, ‘Read my novel – it’s a great novel.’ Originally titled Paul Morel, Sons and Lovers is a highly autobiographical and compelling portrayal of childhood, adolescence and the clash of generations, all set in Lawrence’s native Nottinghamshire. Morel, the centre of his disappointed and fiercely protective mother’s world, is torn between his individual desires and family allegiances.

‘That’s how women are with me,’ said Paul. ‘They want me like mad but they don’t want to belong to me.’ (From Sons and Lovers)

The former office building for the Imperial Fire & Life Insurance Co. became the Reform Club in 1913, designed as a place for Nottingham’s new wealthy middle classes to meet and to engage in discussion. Sir Jesse Boot was counted amongst the membership. In the 1960s it became the Victoria Club, one of the country’s finest private members’ clubs. It’s now a listed building.

The Prussian Officer and Other Stories by D. H. Lawrence (1914)

Sandwiched by Sons and Lovers and The Rainbow, The Prussian Officer and Other Stories is one of Lawrence’s finest collection of short stories. Published in 1914 by Duckworth in London, its eponymous tale tells of sexual tension and revenge. The twelve-story collection also features Odour of Chrysanthemums and Goose Fair.

Through the gloom of evening, and the flare of torches of the night before the fair, through the still fogs of the succeeding dawn came paddling the weary geese, lifting their poor feet that had been dipped in tar for shoes, and trailing them along the cobble-stones into the town. (From Goose Fair)

Jane Neave of Church Farm/Phoenix Farm in Gedling was an academic with a strong interest in both science and literature. She was also the aunt of J. R. R. Tolkien. It was at her farm in 1914 that Tolkien wrote his poem The Voyage of Éarendel the Evening Star. Éarendel, who first appears in this poem, later became “an important element in the mythical background of The Lord of the Rings,” according to Morton and Hayes (2008). This ‘Gedling poem’ may well contain Middle-earth’s origin.