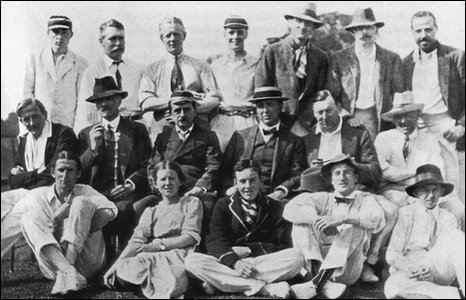 In the year 1900, author J. C. Snaith played first-class cricket for Nottinghamshire, the same year in which his novel Willow the King was published. The book, about an annual cricket match between Little Clumpton and Hickory, has been described as ‘the best cricket story ever written’.

A Jack of all genres, Snaith wrote novels of romance, humour, history and crime. He is credited by the Oxford dictionary with the earliest use of the expression ‘street person’.

Between 1890 and 1913 there was an amateur cricket team called the Allahakbarries. This team often featured famous writers, with Arthur Conan Doyle, P. G. Wodehouse, Jerome K. Jerome, A. A. Milne, A. E. W. Mason, E. W. Hornung and Walter Raleigh all turning out for the side set up by J. M. Barrie (pictured bowling). During one of their ‘friendly’ matches, Barrie’s wife took the crease and was promptly struck on the ankle by a yorker from left-hander J. C. Snaith, a ringer if ever there was one. Apparently, Snaith didn’t know whether to appeal for forgiveness or lbw.

It was in 1900 that the poet and playwright John Drinkwater became involved in Nottingham’s amateur theatre scene, making an appearance in a performance at the Mechanics. At that time Drinkwater worked on the staff of the Northern Assurance Co. in Victoria Street. The young, cash-strapped office worker used to buy rotten fruit from the Market Place to bulk up his lunch.

J. M. Barrie commented that James Prior was a ‘fine writer’, and D. H. Lawrence rated him, but Prior never reached the heights his talent warranted.

Forest Folk is Nottingham born Prior’s best-known work. Full of the local vernacular it’s awash with believable characters coming together through the demands of country life, all taking place in North Notts during an eventful period of history that included the Napoleonic Wars and Luddite riots.

‘I were born an’ bred I’ th’ forest, and lay mysen to die here; it’s a fairish ordinary sort o’ soil to live on an’ be buried in.’ (from Forest Folk)

It was this adult novel that introduced the character Peter Pan, a magical boy who flies around with fairies. Between 1883 and 1884 Barrie had worked as a writer on the Nottingham Journal. It has been suggested that it was in Nottingham that he developed Peter Pan, apparently after witnessing a street urchin wandering through Clifton Grove. It’s more likely that his inspiration for a boy for whom death would be “an awfully big adventure” is likely to be traced back to the death of his brother who died in a skating accident. Barrie later said that his mother had taken some comfort from the thought that her golden boy would never grow up. Barrie did however take regular walks through the Arboretum which does share a few features with Neverland.

‘The reason birds can fly and we can’t is simply because they have perfect faith, for to have faith is to have wings.’ (from The Little White Bird)

Philip James Bailey died in this year. Nottingham-born Bailey is best-known for his epic poem Festus, initially written at Basford House (pictured) where his father lived. Festus was constantly being added to by Bailey who read his poem to the writers William and Mary Howitt at their Chemist’s shop in Nottingham.

We live in deeds, not years; in thoughts not breaths;

We should count time by heart throbs: he most lives

Who thinks most, feels the noblest, acts the best.